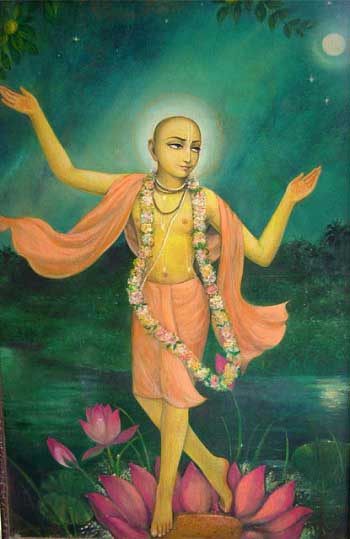 Sripada Padmanabha Maharaja: When Sri Caitanya Mahaprabhu was dancing in Srivasa-angana and performing His other Navadvipa-lila, He fulfilled His [Sri Krsna's] three desires: sri-radhaya pranaya-mahima kidrso vanayaiva. *[See endnote 1] His going to Puri and Godavari were for teaching the jiva souls how to follow this path?

Srila Gurudeva: It is not like that. He was playing sweet pastimes in Navadvipa, and He tasted all these moods in Puri in Gambira with Sri Raya Ramananada and Sri Svarupa Damodara. In Navadvipa He enjoyed His balya-lila (baby and early childhood pastimes) and then His pauganda-lila (early youth pastimes) of teaching. Afterwards He went to Gaya, where He changed, *[see endnote 2] and later He went to Jagannatha Puri. He especially learned Radha's mood when He went to Godavari and accepted Raya Ramananda, who is Visakha-sakhi, as His siksa-guru. After that He again went to Jagannatha Puri, and there He tasted these three moods. [This is described in sutra in Sri Caitanya-caritamrta, Adi 13.26-39.]

Sripada Padmanabha Maharaja: If I understood you correctly, by Sri Caitanya Mahaprabhu's complete lila in Navadvipa, Puri, and Godavari, He became completely fulfilled.

Srila Gurudeva: But always remember that Navadvipa lila is asta-kaliya-lila, which is not true for Puri or Godavari. Navadvipa-lila is prominent. In Godavari He manifested His form as rasaraja-mahabhava-svarupa and told the highest katha to Raya Ramanada; yet, Godavari is not Vrndavana.

Godavari is like Kuruksetra, and Jagannatha Puri is like Dvaraka. Only the pastimes of Sri Caitanya Mahaprabhu in Navadvipa appear in the category of asta-kaliya-lila. This is likened to Krsna's asta-kaliya-lila, in which there is no killing of demons, no Mathura-lila, and no Dvaraka-lila; only His eternal Vrndavana-lilas are present there.

Sripada Padmanabha Maharaja: Do you mean in nitya-dhama?

Srila Gurudeva: In Sriman-Mahaprabhor-asta-kaliya-lila-smarana-mangala-stotram and Sri Krsna-bhavanamrta, Srila Visvanatha Cakravarti Thakura has connected the sweet pastimes of Sri Caitanya Mahaprabhu with Krsna's asta-kaliya-lila. First Mahaprabhu is meditated upon, and then Krsna. *[See endnote 3]

Srila Gurudeva: Yes, but not externally. Inside.

Sripada Asrama Maharaja: Is He tasting them in Srivasa-angana, or all the time?

Sripad Asrama Maharaja: In which lila is Mahaprabhu tasting madanakya-mahabhava in Navadvipa?

Srila Gurudeva: Madanakya-mahabhava was in Mahaprabhu in Navadvipa, but it was not manifested. It manifested in Jagannatha Puri, and especially in the Gambhira.

Sripada Vaikhanas Maharaja: In the Gambhira, Mahaprabhu tasted the mood of viyogini-Radhika. Does He experience madanakya-bhava there?

Srila Gurudeva: Yes, madanakya-mahabhava is there.

Sripada Padmanabha Maharaja: Mahaprabhu is the vipralambha-svarupa, the embodiment of separation mood. But He manifested the extreme symptoms of separation mostly in Puri...

Srila Gurudeva: When Mahaprabhu returned to Navadvipa from Gaya, He also manifested so many symptoms that were just like those of Vrsabhanu-nandini Radhika.

Thank you for your questions.

Brajanath dasa: One of the devotees is asking what is the qualification for meditating on the asta-kaliya-lila of Sri Caitanya Mahaprabhu?

Srila Gurudeva: Such qualification comes after ruci, not before. It comes especially in asakti. Otherwise, if one tries to prematurely engage in such meditation, he will become lusty.

Sripada Madhava Maharaja: In Mahaprabhu's asta-kaliya-lila, Mahaprabhu is remembering Radha-Krsna's pastimes; that is the point.

Srila Gurudeva: Both are non-different.

Srila Gurudeva: Because she is displaying Her viyogini (separation) mood there.

Srila Gurudeva: The pastimes of Nandagaon are divided into two parts. Krsna was living in Nanda-bhavana after He and His family left Gokula. There He would go cow-herding, and the gopis, who were experiencing separation from Him, would go from Yavat and meet Him at Uddhava-kyari (a part of Nandagaon). At that time, all of Srimati Radhika's moods as Vrsbhanu-nandini would manifest.

Sripada Nemi Maharaja: Is the worship of Gaura-Gadadhara for devotees at a particular stage, or only for particular devotees like Srila Bhaktivinoda Thakura?

Sripada Madhava Maharaja: Gurudeva says that Srila Bhaktivinoda Thakura has written that there is no difference between Gaura-Gadhadhara and Radha-Krsna, just as there is no difference between Navadvipa-dhama and Vrndavana-dhama. Srila Bhaktivinoda Thakura has even told that through the krsna-mantra one can serve Gaura-Gadhadhara and through the gaura-mantra one can serve the Divine Couple.

[Endnote 1 – Translation: "Desiring to understand the glory of Radharani's love, the wonderful qualities in Him that She alone relishes through Her love, and the happiness She feels when She realizes the sweetness of His love, the Supreme Lord Hari, richly endowed with Her emotions, appeared from the womb of Çrématé Çacé-devé, as the moon appeared from the ocean" (Sri Caitanya-caritamrta, Adi-lila 1.6).

[Endnote 2 – [Some atheistic Hindus told Chanda Kazi:] "Nimai Paëòita was previously a very good boy, but since He has returned from Gaya He conducts Himself differently. Now He loudly sings all kinds of songs, claps, and plays drums and hand cymbals, making a tumultuous sound that deafens our ears. We do not know what He eats that makes Him become mad, dancing, singing, sometimes laughing, crying, falling down, jumping up and rolling on the ground. He has made all the people practically mad by always performing congregational chanting. At night we cannot get any sleep; we are always kept awake. Now He has given up His own name Nimai and introduced Himself by the name Gaurahari. He has spoiled the Hindu religious principles and introduced the irreligion of nonbelievers. Now the lower classes are chanting the Hare Kåñëa mahä-mantra again and again. For this sinful activity, the entire city of Navadvipa will become deserted" (Sri Caitanya-caritamrta, Adi-lila 17.207-212).

[Endnote 3 – "Sri Gauranga, the Moon over Navadvipa, is manifest in His own abode during eight periods of each day and every day. His pastimes should be remembered by meditative devotees before they remember the pastimes of Sri Krishna, the Moon over Gokula. If someone lovingly reads or recites the Lord's eternal daily pastimes as they are illuminated in the ten verses of this prayer, then the Lord is immensely pleased with that person, by His own merciful compassion" I thus meditate on the daily pastimes of Sri Gaurachandra. (Sriman-Mahaprabhor-asta-kaliya-lila-smarana-mangala–stotram: Aus-picious Prayers for Remember-ing the eight-fold daily pastimes of Sri Caitanya Mahaprabhu, Verse 10).]

Raghunatha Bhatta dasa: Srila Gurudeva, I have one question: Yesterday, Brajanath Prabhu mentioned in his speech that when Krsna leaves Vraja and goes to Mathura, He becomes Mathuresa Krsna, and when He goes to Dvaraka He becomes Dvarakadhisa Krsna. So when Sriman Mahaprabhu leaves Navadvipa and goes to South India or other places, is it a similar situation for Him?

Sripad Madhava Maharaja: He is asking if Mahaprabhu would become 'Nilacala Mahaprabhu' or 'Gambhira Mahaprabhu.'

Srila Gurudeva: No. In the form of Sri Caitanya Mahaprabhu, Krsna took the beauty and intrinsic mood of Srimati Radhika so that He would be able to taste the fulfillment of His three desires. That is why He became Sri Sacinandana Gaurahari. One may say that He is comparable to Dvarakadhisa-Krsna when He goes to Puri, but that is not the fact. Rather, Mahaprabhu was relishing Krsna of Vrndavana.

Moreover, this question is not proper. There is something wrong in the question itself. Sri Caitanya Mahaprabhu is Krsna, but He is Krsna who has taken the beauty of Srimati Radhika and who is tasting the glory of Her love. We should therefore think about Mahaprabhu's moods in relation to Radhika. He cannot be addressed as 'Puri Mahaprabhu' or any similar name.

Sripad Madhava Maharaja: He is understood according to Radhika's moods, not Krsna's moods.

Srila Gurudeva: In the pastimes of Mahaprabhu, Krsna is not Krsna. He is totally absorbed in Srimati Radhika, thinking, "I am Radhika." There is no need to think about Sri Caitanya Mahaprabhu in relation to the moods of Krsna.

Sugata dasa: What is the internal reason that Sri Caitanya Mahaprabhu did not stay long in Vrndavana?

Srila Gurudeva: When He was in Vrndavana, He would see Govardhana and Yamuna and other stimulus for His thinking, "I am Krsna," and "I performed so many sweet pastimes here." He did not want this mood to envelop Him. He did not want his mood as Mahaprabhu to disappear. He therefore quickly returned to Puri.]

[Endnote 5 – "Srimati Radhika is the highest shelter of prema. But She Herself has three aspects. One aspect is the root, and the other two are Her expansions. In Vrndavana, especially in Govardhana, Nandagaon, Varsana, Radha-kunda, Syama-kunda and similar places, She is Vrsabhanu-nandini. She is the root, and She includes Her expansions as well. She never leaves Vrndavana. In Nandagaon (Uddhava Kyari) She is Viyogini-Radha after Krsna went to Mathura. The astonishing madness of separation She experienced as Viyogini-Radha is recorded in Brahmara-gita

As Samyogini-Radha She spent three months in Kuruksetra, where She met with Sri Krsna. Although this is the aspect of Radhika who meets with Krsna at Kuruksetra, Her desire cannot be fulfilled there; She wants to go back to Vrndavana. It is the same Krsna there in Kuruksetra, but in a different dress. There no flute in His hand and no peacock feather crown; He is not Yasoda-nandana, Nanda-nandana, Radha-kanta – He is not addressed by those names. The mood there is very different, because there are so many elephants, horses, and a huge army, and Vasudeva and Devaki and all their associates are present. There is no forest like Vrndavana there, no Yamuna, no peacocks and no deer.

Srimati Radhika tells Sri Krsna, "My heart is not satisfied. There is not even one drop of the ocean of rasa of Vrndavana here in Kuruksetra. I don't want to be here."

Krsna told Her, "You should meditate, and You will realize that You are always with Me. If You will meditate, My lotus feet will appear in Your heart."

She replied, "My heart and mind are the same, and my mind is Vrndavana. So You should come to Vrndavana." This is the meaning of Ratha-yatra. The ratha-cart is the chariot of Radhika's mind, the chariot of Radhika's desire, taking Sri Krsna back to Vrndavana, back to Vraja (represented by the Gundica temple). Samyogini means that there is samyoga, a meeting between Radha and Krsna, but Radhika wants to go back to Vrndavana. She wants to return to the forest of vetasi trees; that is, the forest of kadamba trees, the forest which is fragrant with beli, cameli and juhi flowers. She wants to take Krsna there.

Therefore, first Radhika is Vrsabhanu-nandini-Radhika. Second She is Viyogini-Radhika, who is always in a separation mood and absorbed in citrajalpa, prajalpa, divyonmada and other such bhavas of separation. And in Kuruksetra She is Samyogini-Radhika. She is meeting with Krsna but there is no happiness because all the sweet stimuli of Vrndavana are missing. Kuruksetra is filled with many outside elements that are contrary to Vraja-prema. Therefore, Radhika situates Krsna on the chariot of Her mind and, along with all the other gopis, brings Sri Krsna back to Vrndavana. This is the meaning of Ratha-yatra, and these are the moods Mahaprabhu relished in Jagannatha Puri. (March 25, 2001, Navadvipa)]