What To Do After Parikrama 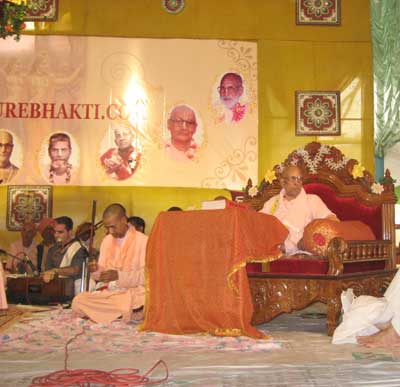 Please accept our humble obeisances. All glories to Sri Guru and Gauranga.

The day after Gaura Purnima, when most of the 15,000 thousand Bengali pilgrims had left and returned to their villages, Srila Narayana Maharaja gave a class in English, in the small temple area in front of the Deities. The following is a transcription of that class:]

This is the last day of Gaura Purnima Mahotsava and parikrama, and now you are all returning to your homes. I think that all the local Bengalis have left, and only Western devotees are here. I think tomorrow or the day after tomorrow all of you will leave, and I will also depart from here the day after tomorrow. Those who are proceeding to Vrndavana and Mathura should go there, and others should return to their countries and preach.

You have done very excellently during this parikrama – especially, those who were engaged in distributing prasadam here at the temple and on parikrama, and also the ladies who were cleaning the places of prasadam distribution. My heartly blessings to you all.

When you return to your countries or your places, without fail you should daily meditate on the mantras that have been given to you – brahma-gayatri, guru-mantra, guru-gayatri, gaura-mantra, gaura-gayatri, krsna-mantra, kama-gayatri, the panca-tattva mantra and hari-nama maha-mantra. Do this daily, without fail.

Someone may think that he has no taste or interest in chanting or meditating. He may be considering, “Money is not coming by chanting.” But money cannot give happiness or transcendental feelings. The holy name, on the other hand, will give everything. It will stop the endless pain of birth and death forever, and you will be happy forever, engaged in the service of Sri Krsna in Vrndavana.

So do not neglect meditating on your mantras and chanting the holy name.

I also want you all to preach our mission – the mission of Sri Caitanya Mahaprabhu and Srila Rupa Gosvami, down to our Gurudeva, Srila Bhakti Prajnana Kesava Gosvami Maharaja, and Srila Bhaktivedanta Swami Maharaja. You should preach. At the time of Srila Swami Maharaja all were very enthusiastic to preach – both ladies and men. Preaching is also sadhana-bhajana.

You should follow Upadesamrta. Control your mind, anger, belly and tongue. If you control them, then kama (lust), krodha (anger), lobha (greed), moda (illusion), mada (pride), and matsarya (envy) are also controlled. Try to control all these urges.

Don’t be angry. Be tolerant like trees – and even more than trees. In this way, if you can control these urges, then you can do bhajana. Someone may say, “I don’t feel energy in chanting the holy name or in meditation. My mind is going here and there.” If such a person simply follows Upadesamrta, his mind will be controlled.

[“The essence of all advice is that one should utilize one's full time – twenty-four hours a day – in nicely chanting and remembering the Lord's divine name, transcendental form, qualities and eternal pastimes, thereby gradually engaging one's tongue and mind. In this way one should reside in Vraja and serve Krsna under the guidance of devotees. One should follow in the footsteps of the Lord's beloved devotees, who are deeply attached to His devotional service." (Upadesamrta, verse 8)]

Always remember this verse. Meditate on your transcendental relationship with Krsna which Gurudeva has given you, and thus perform bhajana. If you perform sadhana-bhajana, then in your future lives the process will be easy for you. In the future you will take birth in the same place in which Sri Caitanya Mahaprabhu’s pastimes are going on. Yogamaya will take you to the place where Sri Caitanya Mahaprabhu, Srila Rupa Gosvami, Sri Svarupa Damodara and Raya Ramananda are present, and after that you will have a chance to go to Vraja.

So don’t be idle in doing sadhana-bhajana. Don’t try to make money; it will not help you. Don’t try to keep money with you. If you have excess money, give it to me at once, and I will engage it at once in my projects. Don’t keep money, otherwise false ego will come and you will think, “I will make a separate temple from this one, instead of my Gurudeva's temple”. and you will be separate from all. Or, you will try to marry again. Don’t do this. Money that is not given to Guru is poison, and from poison comes the poison of sense gratification. If you have any money, give it or send it to me, and I will at once engage it properly.

Next year, please come to parikrama and bring five more persons with you. We will manage everything. More construction will be done and more facilities will be available, and thus our parikrama will be very successful. This year’s parikrama was also so successful. I have never seen a gathering like this. 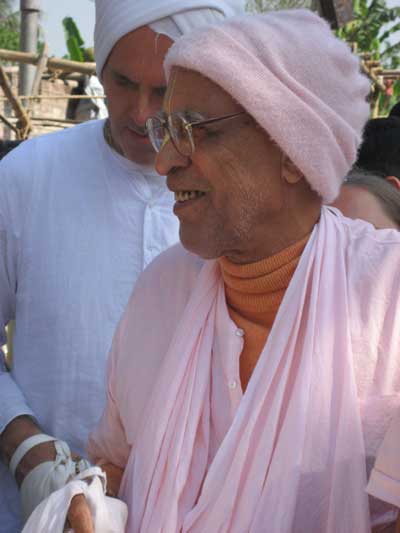