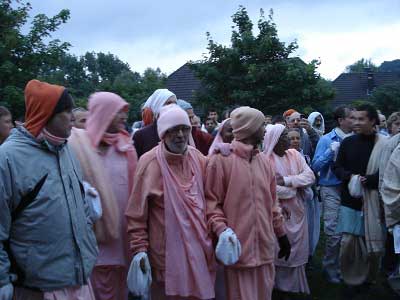 Srila Gurudeva: Are there any questions?

Devotee: Yesterday you were talking about Suka, the parrot of Srimati Radharani. When he was born as Sukadeva Gosvami from the womb of Srila Vyasadeva’s wife, he was already situated in Brahman realization. He didn’t see the difference between male and female, or even between humans and trees. Then he heard Srimad-Bhagavatam for the third time. Why is this?

Srila Gurudeva: No, no, no. Since Sukadeva is the parrot of Srimati Radhika, he already knows everything – more so than Sankara and others.

Brajanath dasa: Since that is the case, then when he was in the womb, why did he have only Brahman realization (realization of all-pervading spirit beyond matter)?

Srila Gurudeva: A mother knows everything about her house and family. Still, when she hears from her son, “Oh, my maternal uncle’s house is like this. He has good horses,” she becomes happy. Similarly, Sukadeva Gosvami, who in Krsna’s pastimes is the parrot of Srimati Radhika named Suka, knows more than Sankara. He went to Kailasa only to relish the sweet pastimes again.

Brajanath dasa: But when he was in his mother’s womb, before hearing Srimad-Bhagavatam from Vyasadeva, he only had brahma-jnana (Brahman realization, or knowledge of the impersonal Absolute Truth).

Srila Gurudeva: No, no, no. Because he is a participant in Sri Radha’s pastimes, he knows everything and has full realization of Radha and Krsna. Why would he taste only brahma-jnana?

We can compare Suka’s pastimes with those of Sita and Rama, or Radhika and Krsna. Sita is the personification of Sri Rama’s power, hladini-sakti, and thus non-different from Rama. So, one might ask what was the necessity of her marrying Him? The answer is that she married him in order to enact her beautiful human-like pastimes with Him.

Similarly, Sukadeva Gosvami was playing a role, for show. It was a show. He wanted to demonstrate to the world that Krsna’s sweet pastimes are so powerful and attractive that even a brahma-jnani (one who is beyond material considerations and is situated in transcendence) is attracted by them.

[All kinds of atmaramas (those who take pleasure in atma, or spirit self), although freed from all kinds of material bondage, become attracted to render unalloyed devotional service unto Sri Krsna, who possesses such wonderful transcendental qualities that He attracts everyone, including such great liberated souls.]

Sripad Padmanabha Maharaja: Srila Gurudeva, yesterday you were stressing the necessity of vaidhi-bhakti. You were saying that many persons are not following vaidhi-bhakti, yet they want to achieve raganuga-bhakti.

What about those persons who are chanting and following all the principals of vaidhi-bhakti, but always want to hear rasa-katha?

Srila Gurudeva: To have this greed is good; very, very good. It is an elevated aspiration.

[If consciousness which is infused with the mood of the gopis’ love for Sri Krsna is available anywhere, then buy it at once, without delay. The only price to get it is laulyam, an intense longing to obtain vraja-bhava. Without this divine greed, such love cannot be obtained even by performing pious activities (karma-misra-bhakti or vaidhi-bhakti) for millions of births.]

Let us suppose one does not possess this qualification, yet he is telling others, “I have so much greed for raganuga-bhakti and ragatmika-bhakti.” Suppose that person is speaking only on this subject to his various audiences. Then, later we see that he is entangled with a lady and has left his devotional practices. In that instance, where is his ruci?

So, we should be careful. If we have actually attained such greed (laulyam), we do not disclose this by announcing, “I have greed.” We nourish this mood internally, while externally following vaidhi-bhakti. Internally, a person with real greed would be like Srila Raghunatha dasa Gosvami.

Sripad Padmanabha Maharaja: Suppose a person admits, “I don’t have greed. But I want greed, so I want to hear only rasa-katha. This is the process for getting greed.”

Srila Gurudeva: It is essential that such a person also hears Bhagavad-gita, Uddhava-samvada (the conversation between Krsna and Uddhava in the Eleventh Canto of Srimad-Bhagavatam), and similar subjects. By this, one will gain strength for raganuga-bhakti.

It has been written in Sri Caitanya-caritamrta (Adi-lila, 2.117):

[A sincere student should not neglect the discussions of philosophical conclusions (siddhanta), considering them controversial, for such discussions strengthen the mind. Thus, one’s mind becomes attached to Sri Krsna.]

Are you happy with our classes?

Harer-namananda dasa: Yes, very happy. I want to learn more from you.

Srila Gurudeva: You are very fortunate. Thank you for your effort in organizing this good festival.

Harer-namananda dasa: It is happening by your mercy.

Srila Gurudeva: Raghava Pandita, you should take more interest, and come nearer to me.

Sripad Madhava Maharaja: Srila Rupa Gosvamipada has explained the symptoms of greed (in Bhakti-rasamrta-sindhu, 1.2.294), the fruit of which is: krsnam smaran janam casya prestham nija-samihitam – one remembers Krsna, and especially His intimate associates. The second symptom is: kuryad vasam vraje sada – one lives in Vraja. And third is: sravanot-kirtanadini vaidha-bhakty-uditani tu yany angani ca tany atra vijneyani manisibhih – one maintains all the limbs of vaidhi-bhakti.

Srila Gurudeva: I discussed this yesterday, and Srila Bhaktivinoda Thakura has given the same instruction in Jaiva-dharma.

Sripad Madhava Maharaja: You said yesterday that Srila Visvanatha Cakravarti Thakura wrote about this in his Raga-vartma-candrika. There he says that a person established in raganuga-bhakti follows the principals of vaidhi-bhakti. If he neglects such principles, he simple creates disturbance (utpatayaiva kalpate).

Dhira-krsna dasa: The followers of the Ramanuja Sampradaya, or Sri Sampradaya, attain Vaikuntha without lobha-mayi-bhakti (bhakti enriched with pure greed to attain the transcendental service of Sri Sri Radha Krsna). They do this on the strength of vaidhi-bhakti alone.

Srila Gurudeva: Yes. By following such principles they attain pure aisvarya-mayi-bhakti (bhakti imbued with full sense of the Lords godly opulence; worship in awe and reverence). They can go to Vaikuntha.

Dhira-krsna dasa: Serving in aisvarya-mayi-bhakti, that devotee can transcend the stage of ruci and come to asakti, bhava, and prema. Isn’t this a fact?

Srila Gurudeva: Yes, they can achieve prema; but that prema will be aisvarya-mayi-prema.

Sripad Madhava Maharaja: This means they do not go beyond Vaikuntha.

Srila Gurudeva: Yes. They are situated in raga, although it may be that they possess only santa-raga or dasya-raga. Those who reside in the Vaikuntha planets are situated in dasya-rasa, and this is especially true in Rama-lila.

Sripad Padmanabha Maharaja: So, regarding the sadhaka who wants to attain Vaikuntha and is worshiping Lord Rama or Lord Narayana; can he be called a raganuga-bhakta (one who is devotedly following in the footsteps of ragatmika devotees of the Lord’s spiritual abode)?

Srila Gurudeva: If one serves Narayana like Jaya and Vijaya, or like Narada, Viksvasena, Garuda, or Laxmi, he is known as a ragatmika-bhakta with aisvarya-bhava.

Dhira-krsna dasa: We heard that the term ragatmika is used only in reference to the Vrajavasis.

Srila Gurudeva: No. Rather, the associates in Vraja are ragatmika-bhaktas to the extreme point. Hanuman has some raga, as do the Pandavas, but the raga of all the devotees outside Vraja is aisvarya-mayi, full with a conception of the Lord’s opulence.

Bhudhara dasa: Srila Gurudeva, you say that whatever little realization someone like us may have, we should never share it with anyone; that would be compared with camphor which evaporates when exposed to the air. I think you indicated that someone who expresses supposedly high realizations is actually aspiring for prestige and followers. Is that correct?

Srila Gurudeva: If one is actually experiencing spiritual realizations, his nature will be that he will hide it – as a millionaire hides his wealth. Do you understand? A millionaire will consider, “Others should not know, otherwise they might somehow take it away.” Similarly, a person with actual realization considers, “I should hide my realization, otherwise it will evaporate like camphor burning by an open doorway.”

Is there a book table here at the festival?

Srila Gurudeva: Where? At the main gate?

Brajanath dasa: They have a big book table outside the gate.

Devotee: I feel very grateful to your sannyasa disciples. They are taking care of me like a little brother. I want to ask you, Srila Gurudeva, how can I serve you?

Srila Gurudeva: By chanting, remembering, following the principles of your Gurudeva and mine, and by following Srila Rupa Gosvami. Also, you can distribute my books. You can serve me in this way.

Devotee: Thank you very much.

Srila Gurudeva: This instruction is for everyone.

Sripad Damodara Maharaja: Srila Gurudeva, Sri Caitanya-caritamrta (Adi-lila 3.15) says vidhi-bhaktye vraja-bhava paite nahi sakti (But simply by following such regulative principles one cannot attain the loving sentiments of the devotees in Vrajabhumi). One cannot attain Krsna by vaidhi-bhaki. So, we don’t need to perform vaidhi-bhakti. We are doing raganuga.

Srila Gurudeva: No, no. If you are correct, then why has Srila Krsna dasa Kaviraja Gosvami written about the sixty-four limbs of bhakti? He is following Srila Rupa Gosvami.

Raganuga-bhakti is the best form of bhakti in this world, but it is followed and experienced inwardly. One who actually possesses greed does not disclose it.

[To the person fixed in the regulative principles, the holy name gives the jewel of independence, placing him on the path of spontaneous devotion (raganuga-bhakti). That person, overcome by spontaneous attachment to the Lord, takes shelter of the parakiya mood and goes on to become absorbed in love for Sri Krsna.]

Srila Gurudeva: The meaning of this sloka is that in Sri Caitanya Mahaprabhu’s sampradaya the practices of vaidhi-bhakti take one to raganuga.

Sripad Damodara Maharaja: Does that vaidhi-bhakti have a special name?

It is not raganuga at first. It begins from vaidhi-bhakti. If one in the line of Srila Rupa Gosvami follows vaidhi-bhakti, that vaidhi-bhakti is really the beginning of raganuga.

Srila Gurudeva: Is this vaidhi-bhakti or raganuga-bhakti?

Sripad Madhava Maharaja: It is one hundred percent vaidhi.

Srila Gurudeva: Still, everyone should observe these holy days, otherwise they will be corrupted.

Srila Gurudeva: My brahmacari, do you want to go down?

Srila Gurudeva: I will slap you. Sannyasis should not fall down, and brahmacaris should prepare to become sannyasis in the future. One who gives up either the sannyasa or brahmacari asrama has no bhakti. Be careful. What you want depends on you. I cannot control you.