In Glorification of Sri Radha 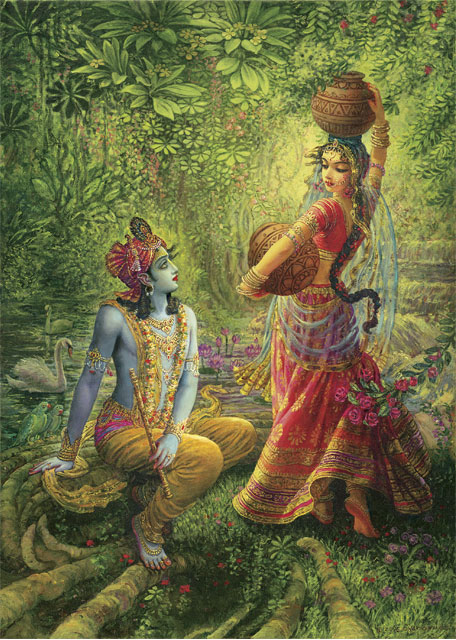 Sripada Nemi Maharaja: [Having heard from Srila Naryana Gosvami Maharaja that without Srimati Radhika Krsna would be zero, or nirvisesa-brahma (an impersonal God without qualities), and having determined from his understanding of Jaiva-dharma that even without Her, Krsna is the Supreme Person with independent desire, Sripada Nemi Maharaja asks:] Jaiva-dharma states that Krsna is not impersonal brahman. He is purusa (the Supreme Personality of Godhead); He has desire. You said we will have to reconcile. I would like to know how we reconcile these two.

Srila Narayana Gosvami Maharaja: I have said that without Radhika, Krsna is nirvisesa-brahma. What has been written in Jaiva-dharma?

Sripada Nemi Maharaja: It is stated there that He is not nirvisesa-brahma. Because He is purusa, He has His own desire. (See Endnote)

Srila Narayana Gosvami Maharaja: Desire is also a power, and that desire-power is called iccha-sakti. Radhika is present (as the personification of that iccha-sakti). Without Radhika, there is no existence of Krsna. He is nirvisesa-brahma.

Srila Narayana Gosvami Maharaja: It seems that Krsna is walking, but His 'walking-power' is Radhika.

Sripada Madhava Maharaja: Krsna's smiling, speaking, seeing, and everything else is a power. Without power, how can He do these things?

Babaji: Now see how the sakti of para-tattva (the Supreme Personality of Godhead) is never absent in Him. Para-tattva is always self-illuminated and self-manifesting. The Vedic mantras describe the three types of sakti of that self-manifested tattva as follows:

That Paramatma is omniscient and the creator of the world. He is Self-born (atma-yoni), the controller of kala (time), the knower of all, the Isvara of pradhana (maya), and the Isvara of all ksetrajnas (jivas). He is full of all transcendental qualities and beyond all material qualities, yet He is their Master. He binds the jivas in samsara, places them in their positions, and liberates them from it. (Svetasvatara Upanisad 6.16)

This mantra describes the three states of para-sakti. The word pradhana denotes maya-sakti; the word ksetrajna denotes the jiva-sakti; and the cit-sakti has been alluded to by the word ksetrajna-pati. The Mayavadis explain that brahma is the condition of para-tattva without sakti, and that Isvara is of this state with all sakti, but this doctrine is simply imaginary. In reality, Bhagavan always possesses all sakti. Sakti is present in all of His aspects. He is eternally situated in His svarupa, and although He has all sakti in that svarupa, He Himself remains the Supreme Person, full of His own independent will.

Vrajanatha: If He is fully associated with sakti, He only works with the assistance of sakti, then where is His independent nature and desire?

Babaji: Sakti-saktimator abhedaù – according to this statement in Vedanta, sakti (potency) and the saktiman puruña (the Supreme Person who possesses all sakti) are non-different. Work shows the influence of sakti; that is, all work is accomplished only by the means of sakti. However, the desire to do work is an indication of saktiman. The mundane material world is the work of maya-sakti, all the jivas are the work of jiva-sakti, and the cid-jagat (spiritual world) is the work of cit-sakti. Bhagavan inspires the cit-sakti, jiva-sakti, and maya-sakti to be engaged in their respective activities, but He Himself is still nirvikara (unattached and unaffected).

Babaji: Nirvikara means to be free from any material transformations (mayika-vikara). Maya is the shadow of svarupa-sakti. The work of maya is reality, but it is not an eternal reality. Thus the defect of maya is not present in the para-tattva. The vikara that is present in Sri Hari in the form of His desire and pastimes is nothing but the highest manifestation of prema. Such wonderful manifestations of transcendental variegatedness are present in advaya-jnana Bhagavan. In spite of creating the material world by His desire through His maya-sakti, this cit nature remains in eternal, unbroken existence. Maya has no connection with the astonishing, variegated lila of Bhagavan in the spiritual world.