We Should be Very Careful 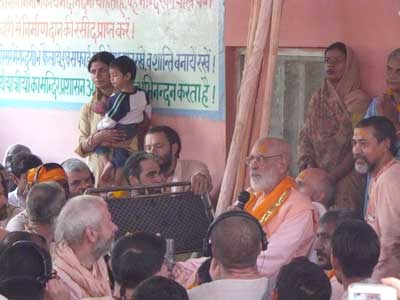 By the mercy of Sri Sri Guru Gauranga Gandharvika Giridhari, sixteen days of our parikrama have passed without any troubles. During our parikrama, we have had darsana (audience) of many of the forests of Vrndavana, and now we are at the foothills of Sri Giriraja Govardhana. 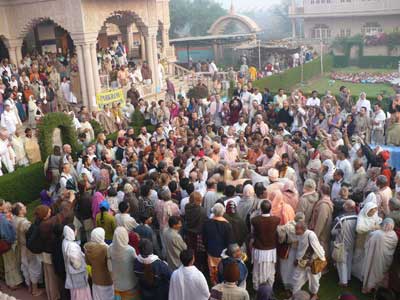 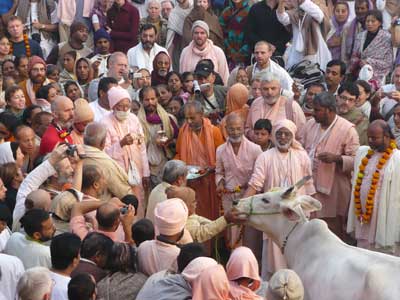 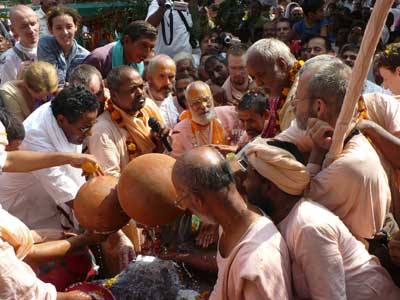 Thakurji is generally offered fifty six preparations at festive occasions such as Annakuta, but I think we have three hundred and sixty or maybe even more to offer Him. You are very, very fortunate that you are contributing to this festival in so many different ways. Giriraja Maharaja will definitely be merciful to all of you.

We must give up those activities that are unfavorable for bhakti, like the six pushings (the urges of speech, mind, anger, tongue, belly, and genitals.), svarupa-brahma (mistaken identity), hrdaya-durbalya (weakness of heart), asat-trsna (taste for material enjoyment), and aparadha (offense). All the anarthas are unfavorable for one’s attainment of bhakti. The more we are free from them, the more our bhajana will shine brilliantly.

Srila Rupa Gosvami has stated in Sri Upadesamrta (verse one):

A sober and intelligent person first of all controls his speech. He will not speak simply whatever comes into his mind, for that is a big anartha. One’s power of speech, one’s words, should only be used to speak hari-katha.

Krodha, meaning ‘anger’, is the root cause of all anarthas, or unwanted habits and thoughts. As soon as one becomes angry, his intelligence is destroyed and he becomes bewildered about what is to be done and what is not to be done.

Jihva-vega in the above verse means ‘pushing of the tongue’. The tongue is always very greedy; it always wants to taste more and more new things. Sri Caitanya Mahaprabhu told Srila Raghunatha dasa Gosvami, “As long as the tongue is running here and there to taste many things, one cannot attain Sri Krsna.” He also warned, “You should very carefully control this urge of the tongue. Do not eat opulent foods and do not wear luxurious clothing, and at all times be engaged in chanting the Lord’s holy names.”

There are two types of ‘pushing of the tongue’: To eat very nice, palatable foods, and to speak without control. The uncontrolled tongue is the cause of many anarthas. Draupadi once insulted Duryodhana by saying, “Like father like son; as the father is blind, the son is also blind.” Duryodhana became very angry at her words and, determined to take revenge, later tried to strip her naked in a large assembly. This became the cause of the great battle of Kuruksetra, the war described in the Mahabharata, and this was caused by the words of Draupadi.

A similar situation occurred in the transcendental pastimes of Srimati Sita devi. Ravana sent Marici, a mystical personality who took on the form of a golden deer, to the forest where Lord Ramacandra was residing along with Sita and Laksmana during His exile. Sita devi saw the deer and asked Lord Ramacandra to catch it and bring it to Her. Lord Ramacandra went after the deer and shot it with his arrow. As the deer lay dying, he imitated the voice of Lord Ramacandra and called out, “Laksmana! Laksmana!”

Hearing the cry for help and thinking it to truly be coming from Lord Ramacandra, Sita devi said to Laksmana, “Your brother Ramacandra is in trouble. Go to Him quickly!” Laksmana replied, “No. My brother has instructed Me to stay here and protect You.” Sita then angrily accused Laksmana, “Oh, You are thinking that if Rama is dead, then You are free to marry Me!”

Hearing this, Laksmana clasped His hands over His ears and said, “What are You saying? I cannot tolerate such harsh words. Of course I will go. Let all auspiciousness be with you.” After making arrangements to protect Sita devi, Laksmana then left to find Ramacandra. Left alone, Sita devi was kidnapped by Ravana. She suffered much at his hands, and the result was another big war.

Do not show anger.

Udara-vega in this verse means ‘pushing of the belly’. If we will eat until we are full to the neck, the belly will become so swelled that we will have to sleep. You cannot control the senses if you eat too much. Everything that is inauspicious for bhakti will then manifest in you, just because of eating more than necessary. This verse, beginning with vaco vegam, teaches that we must give up those things which are not favorable for bhakti. Don’t speak about anything that is not favorable for bhakti. Only speak about the Supreme Lord and those personalities who are related with Him. Glorify the Vaisnavas. Only discuss these things.

Control the pushing of the tongue by serving and respecting the Supreme Lord’s prasadam and the maha-maha-prasadam of His devotees. We should accept this maha-prasadam in an appropriate and careful manner; not to greedily fill the belly. To remind ourselves of this we sing:

When we take prasadam, we sing “Oh sadhu, be careful. Don’t overeat and don’t eat with a mentality for personal enjoyment.” Maha-prasadam is so rare. When Srimati Parvati devi and Sankara honored maha-prasadam, they began to dance. Do not ‘eat’, but rather ‘honor’ prasadam. Do not ‘chant’ the holy name, but rather ‘serve’ the holy name. Do not ‘listen’ to harikatha, but rather ‘serve’ harikatha. Serve prasadam and harikatha – with faith and respect for their transcendental identity; this is bhajana.

Sri Caitanya Mahaprabhu said, “Beware. Do not meditate on good things to eat or to wear.” There are six enemies, and by not meditating on nice eating and dressing, these enemies – lust, anger, greed, madness, illusion, and enviousness, can be controlled. If you do not try to control these pushings, you will not be able to progress in your bhajana.

One who can control these six pushings can become a bona fide spiritual master.

[Ramacandra dasa:] You are saying that by performing bhajana we will be able to be rid of all these anarthas, but on the other hand, you are saying that unless and until we are able to control these pushings, we cannot progress in bhajana. These seem like contradictory statements. How can we reconcile this?

[Srila Narayana Maharaja:] Srimad-Bhagavatam explains that Mother Yasoda made great efforts to tie Her son Krsna, but Krsna would not allow Himself to be bound until He Himself desired to be bound. We see that without Krsna’s mercy, Mother Yasoda was unable to bind Him; so why did she try? Yasoda had made a vow: “I will definitely bind Him today.”

It is not that the Supreme Lord’s mercy will appear just anywhere. By His mercy anything is possible, yet His mercy dawns when, from the devotee’s heart’s internal desire, that devotee makes the endeavor and thinks, “I will do it, even if I have to leave my body to do so.” If one has determination like this, then the Lord’s mercy will surely come to that person.

We should try, and, seeing our efforts, the Supreme Lord’s mercy will manifest and all unwanted things will be removed from our lives. By our own efforts alone, God’s mercy won’t necessarily be there. Both things are necessary. Do you understand? If you think that His mercy will come for whatever you want, no matter how you are behaving, this is incorrect thinking. Both our endeavor and His mercy are needed.

According to Srila Rupa Gosvami, there are six impediments to the performance of bhakti:

A sadhaka should be careful.

A family person needs to collect to maintain his family, but he should not collect too much. He should not be excessive. If day and night he is only working for money, his bhajana will be spoiled – but he is allowed to engage in material business for maintaining his family in order to perform sadhana and bhajana.

However, those who are in the renounced order are not at all permitted to engage in materialistic worldly enterprises for their maintenance. We can see how the six Gosvamis and our disciplic succession of spiritual masters have spent their lives. We should follow their exwmple.

Prayasas means ‘overendeavor’. Don’t endeavor for anything other than bhakti. If you show your hand to an astrologer and he tells you how much wealth you are due, this is an obstacle for your bhakti. Do not do these things. Do not do anything that is opposed to bhakti, especially taking advice from astrologers who have no understanding of the aim and object of our Vaisnava tradition. These things will spoil your bhakti. Many astrologers give Nrsimha-kavacha and take money in exchange for this. Do not do these things. Beware.

[Ramacandra dasa:] What if we give Nrsimha-kavacha and don’t take money?

Laulyam refers to distractions to bhakti like sometimes adopting the path of karma, or jnana, or yoga. This makes the mind unstable.

Niyamagraha in the above verse means ‘following rules and regulations fanatically, without understanding, or not following at all’. Perhaps you have taken a vow: “I will chant 100,000 names. I will perform dandavat parikrama around Govardhana.” It may be that you have some desire for these things and that you are trying. However, if you are following your vow to chant 100,000 holy names and you neglect to offer your obeisances to Srila Gurudeva when he enters the room, then your bhakti will be spoiled. If you are doing arcana (worship, arati, etc.) on the altar of the Deities and your Gurudeva enters the temple, and you don’t stop your arcana to offer him obeisances and attend to him if required, this is niyamagraha. If you are speaking harikatha to an audience and your Gurudeva enters the place where you are speaking, and you don’t stop speaking in order to offer him obeisances and so on, that is niyamagraha.

Do not be friends with materialists, mayavadis, and those that are attached to the association of the opposite sex. . It may be that you have to associate, but it should be in a detached manner. If you want to be close to someone, this should be with Vaisnavas. You should also find out whether or not that Vaisvana is pure. Is he affectionate towards you? Is he in the same spiritual mood as you? By taking the association of materialists and mayavadis, one’s intelligence will be spoiled. Be very careful about this.

[*Endnote: (From Bhakti-rasamrta-sindhu-bindhu by Srila Visvanatha Cakravarti Thakura) Anarthas are of four kinds: (1) svarupa-bhrama (illusion about spiritual identity), (2) asat-trsna (thirst for that which is unreal; that is, material enjoyment), (3) aparadha (offences) and (4) hrdaya-daurbalya (weakness of heart).

Hrdaya-daurbalya is of four kinds: (1) tuccha-asakti (attachment for useless things), (2) kuti-nati (deceitful behavior. The word kuti-nati may be broken down into the constituent parts: ku, bad or evil, and na or nati, that which is forbidden. In that case it would mean doing wicked deeds or doing that which is forbidden), (3) matsarya (envy) and (4) sva-pratistha-lalasa (desire for one's own fame and prestige).