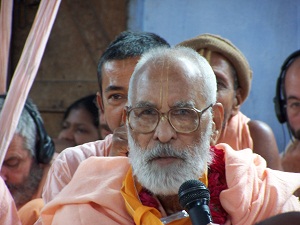 In December of 2007, we sent you a photo-tour report of Srila Narayana Gosvami Maharaja's visits to Delhi and Bangalore. In that report you received a few words from Srila Maharaja's Bangalore lecture regarding the ritvik philosophy. Below is a complete transcription of what he said on this subject at that time. Srila Maharaja spoke in Hindi, and Acyutananda dasa brahmacari kindly sent us the following translation:]

I want to say something regarding a certain matter.

Nowadays, some people have begun to follow the ritvik doctrine.* Having left the actual guru-parampara, they have accepted the ritvik parampara. But the ritvik doctrine has no relationship with spirituality (paramartha). Ritviks simply perform fire sacrifices (yajnas), take some payment (daksina), and then depart.

The guru-parampara descends from Sri Krsna to Brahma, Brahma to Narada, Narada to Vyasa, Vyasa to Madhvacarya, Madhvacarya to Laksmipati, Laksmipati to Madhavendra Puri, to Isvara Puri, to Sri Caitanya Mahaprabhu, to Svarupa Damodara Gosvami, to the Six Gosvamis, and ... to Srila Bhaktivinoda Thakura, and it is descending down to the present day.

It is from these four paramparas that we receive tattva-jnana, knowledge of the essential philosophical truths. From diksa one receives divya-jnana, realization of the soul's particular relationship with Krsna, and this is given by the bona fide self-realized guru. 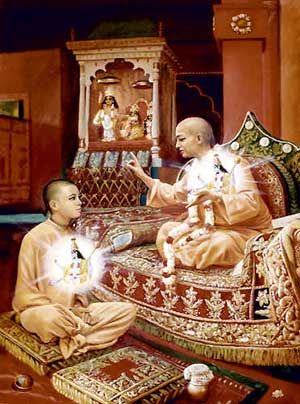 The ritviks have no relationship with this. If the ritvik doctrine does not accept the guru-parampara, it is against bhakti. Having said this, I am ending my discussion (vaktavya, literally meaning ‘that which should be said').

THE NECESSITY OF APPROACHING A SAD-GURU
FOR ETERNAL AND TRANSCENDENTAL BENEFIT
And further Sri Krsna says:

"Just try to learn the truth by approaching a spiritual master. Inquire from him submissively and render service unto him. The self-realized souls can impart knowledge unto you because they have seen the truth."

For understanding the Supreme Absolute Reality, which is the topmost benefit of the jiva, one must approach a guru who has realized the truth. By offering him obeisances, inquiring submissively from him, and rendering service to him, you should please him. Thus pleased, he will bestow upon you knowledge of jiva-tattva (the pure constitutional nature of the self), para-tattva (the nature of Supreme Absolute Reality), and bhakti-tattva (the nature of devotion to Sri Krsna). After knowing all these truths, your human life will be successful.

It is clear that the tattva-darsi (self-realized) guru imparts knowledge of only bhagavata-tattva, bhakti-tattva, and atma-tattva. He has nothing to do with the fulfillment of one's temporary mundane desires.

It is said in the Upanisads:

"To learn the transcendental subject matter, one must approach a spiritual master. In doing so, he should carry fuel to burn in sacrifice. The symptom of such a spiritual master is that he is expert in understanding the Vedic conclusions, and therefore he constantly engages in the service of the Supreme Personality of Godhead."

For attaining vijnana (knowledge with prema-bhakti) of the supreme Absolute Entity, carrying samidha (wood for the sacrifice), which is considered to be representative of sublime faith, one must approach with complete surrender of body, mind, and words, a guru who knows the tattva of Krsna and the essence of the Vedas.

"Only in the hearts of great saints, those who have transcendental devotion (para-bhakti) unto the Supreme Lord and also toward their Gurudeva, is the essence of all the Vedas revealed."

A similar statement is found in Srimad-Bhagavatam:

Bhakti, loving service to the lotus feet of Sri Krsna, is the only auspicious path for the jivas. To know this, the inquisitive sadhakas (practitioners) must take shelter of the lotus feet of a sad-guru. Only one who is very expert in the understanding of sabda-brahma (the conclusions of the Vedas), who has realized the Supreme Absolute Truth and who is never over-powered by mundane sense objects or miseries, is a sad-guru. In Sri Caitanya-caritamrta, this conclusion is also established:

"According to their karma, all living entities are wandering throughout the entire universe. Some of them are being elevated to the upper planetary systems, and some are going down into the lower planetary systems. Out of many millions of wandering living entities, one who is very fortunate gets an opportunity to associate with a bona fide spiritual master by the grace of Krsna. By the mercy of both Krsna and the spiritual master, such a person receives the seed of the creeper of devotional service."

"If the conditioned soul engages in the service of the Lord and simultaneously carries out the orders of his spiritual master and serves him, he can get out of the clutches of maya and become eligible for shelter at Krsna's lotus feet."

THE DIFFERENCE BETWEEN ‘GURU' AND ‘RITVIK'
From the above scriptural evidences it is very clear that the relationship between guru and disciple is eternal and transcendental. Gurudeva is described as the manifestation of God, and therefore he must always be worshipped like Him. Only by his mercy can a jiva who is bound in the grips of maya be freed, and after being situated in his pure constitutional position, become engaged in the service of the Lord. Without the mercy of Sri Gurudeva, the supreme welfare of the jiva is impossible. 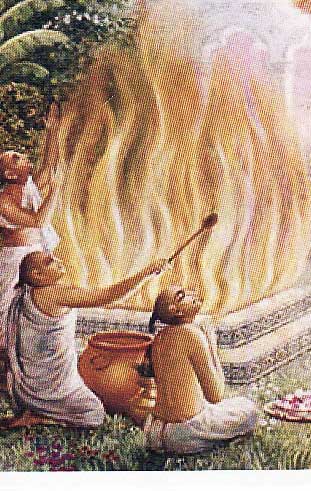 On the other hand, the relationship between the yajman (the person who undertakes a fire sacrifice in order to fulfill some material desire, and on whose behalf the priest, or ritvik, performs the fire sacrifice) and the ritvik is temporary and based on self-interest. It is for the fulfillment of mundane desires. Their relationship lasts for a short time only. Therefore, since time immemorial, the system of guru-parampara, which is also known as amnaya or sat-sampradaya, has been prevalent in the scriptures. The four lines of bona fide succession of spiritual masters have originated from the associates of the Lord, that is, Sri Laksmi, Sri Brahma, Sri Rudra and Sri Sanat-kumara. In the age of Kali, Sri Ramanujacarya, Sri Madhvacarya, Sri Visnusvami and Sri Nimbaditya respectively are the four acaryas famous as the followers of the above personalities. Guru-parampara (the bona fide succession of spiritual masters) is always prevalent in the amnaya line of these four acaryas. Even in the advaita-sampradaya (followers of Sankaracarya), the tradition of guru-parampara is well preserved.

'RITVIK-GURU', A CONTRADICTION OF TERMS
Param-pujyapada Srila Bhaktivedanta Swami Maharaja has neither accepted nor mentioned the tradition of ritviks as gurus anywhere in his bona fide books. Nor did he support the tradition of ritviks in his personal letters. Whatever Srila Swami Maharaja arranged, it was most definitely not 'ritvik-guru', which is a contradiction of terms. To call it this is the cause of embarrassment for him among those who know the Vedic sastras.
As you can see, it is very important to consider the scriptural meaning of the word 'ritvik'. The term applies only when a yajman undertakes a yajna for fulfilling his material desires. Because he, the yajman, is himself ignorant of the Vedic rules for performing the yajna, he appoints, for the successful completion and achievement of desired results, the ritviks, who are virtuous and who know the Vedas.

'RITVIK-GURU', AN IMPRACTICAL CONCOCTION
WHICH IS AGAINST THE SCRIPTURAL CONCLUSIONS
In consideration of this principle, can it be conjectured that a guru, being ignorant of the diksa-mantras and their conceptions, will appoint a ritvik more qualified than himself, who in turn will give diksa to others, thus acting as the representative of the guru? Some people say that Srila Bhaktivedanta Swami Maharaja appointed ritviks who were to give diksa to his disciples. If this statement is accepted as true, it means they are accusing Srila Swami Maharaja of being an unqualified guru, an ignorant yajman who, for the sake of fulfilling his material desires would have appointed ritviks more qualified than himself. No, it cannot be true; this is completely impossible. Therefore, on the path toward attaining the Supreme Absolute Reality, the Supreme Personality of Godhead, this concocted ritvik conception is impractical and against the scriptural conclusions.

[Question:] How does a disciple relate with his guru once he has entered in aprakata-lila (the guru's entrance into the eternal pastimes of Krsna in the spiritual world)? Like Srila Bhaktivedanta Swami Prabhupada's disciples, those who took initiation when he was still physically present. How can they relate with him since he is now in aprakata-lila?

[Srila Narayana Maharaja:] A disciple should think, "He is my Gurudeva. He is eternal. He is still here." When we pray for anything, he will inspire us. He is eternal, everywhere, and in our hearts also. He has not left his body. His body, his everything, is transcendental. So don't worry. Our relationship with him is the same as it was.

[Question:] Does the example of Sri Madhvacarya approaching Srila Vyasadeva show that an aspiring disciple can, so to speak, summon a departed acarya who has entered into aprakata-lila, and request initiation from him? Of course, Madhvacarya was in a special situation. He was an empowered expansion of the Lord. He was one of the four sampradaya acaryas.

[Srila Narayana Maharaja:] Madhvacarya was a direct disciple of Srila Vyasadeva. When Madhvacarya was living, about 4000 years had passed since Vyasa had disappeared from the vision of this world. However, Madhvacarya knew that Vyasadeva was still alive and that he is eternal. So he prayed to him in Badrikasrama, beseeching him, "I want to take your darsana and to be initiated by you." When he was praying, Vyasadeva personally came there, and Madhvacarya presented his wish to him, that he would give Madhvacarya initiation. After that, Vyasa disappeared.

So guru is like this. However, those who do not understand the correct siddhanta (conclusive philosophical truths) and are not very learned, and who have not developed their bhakti to the level of madhyama-uttama-adhikari or uttama-adhikari, cannot realize all these truths. And certainly a kanistha-adhikari is not able to realize all these things. Such persons, being bewildered, may try to take help from the ritvik philosophy or some other ideology which is not our siddhanta.