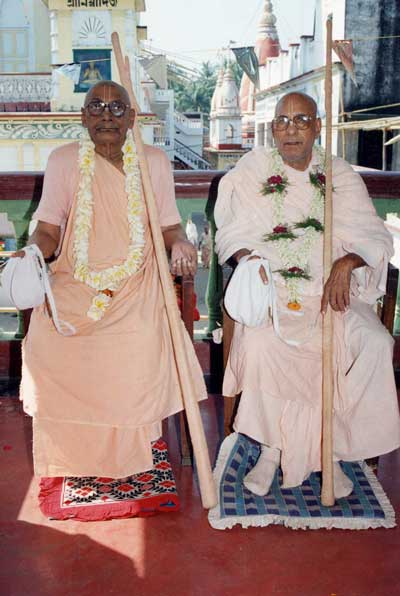 As he does every year at this time, Srila Narayana Gosvami Maharaja organized a Separation Festival (Viraha Mahotsava) for them, at which time he called on several of their disciples to speak about their glories and offer heart-felt sentiments. Almost everyone spoke in Hindi, as did Srila Narayana Maharaja himself.

For a great soul there is no difference between his appearance and disappearance days * because he is actually always present to guide and give his blessings. These days are especially powerful occasions to remember them and receive abundant blessings. Therefore, please accept the transcription of the lecture below, given this Kartika, on Srila Vamana Maharja’s disappearance day:]

According to the degree of love and affection towards someone, one will experience that much separation for a person. The gopis had so much affection for Sri Krsna, and that is why they felt so much separation when He went to Mathura. We have read about the various stages of their separation in the Srimad-Bhagavatam and other scriptures. 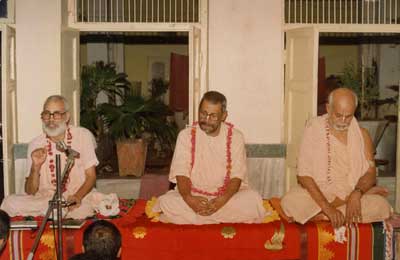 Similarly, the more one is attached to Srila Gurudeva’s lotus feet, the more separation one will feel in his absence. We see the topmost example of this in the life of Srila Ragunatha dasa Gosvami, who had so much affection in his heart towards his siksa-gurus, Srila Rupa Gosvami and Srila Sanatana Gosvami. What was the condition of Srila Raghunatha das Gosvami when their pastimes became un-manifest in this world? He saw Giriraja Govardhana like a python, all of Vraja seemed empty to him, and appeared like the mouth of a very ferocious tiger. Due to his love and affection, this is how he described his separation from Srila Rupa and Sanatana Gosvamis.

According to how much affection you have towards your Gurudeva’s lotus feet, that much separation you will feel. You must understand that the devotee who feels separation from his Guru is very elevated in bhakti, and he will soon attain the lotus feet of Sri Sri Radha and Krsna. Without Gurudeva’s mercy, this is not possible.

I have seen that if there was work which involved a lot of responsibility, my Gurudeva would not give that work to me or Srila Vamana Maharaja, but to Srila Trivikrama Maharaja, and he would not take it easily. He would argue and ask questions, and then he would accept that work and complete it.

Being with Guru Maharaja, Srila Vamana Maharaja and I used to work in the kitchen and engage in many other services. We used to clean the pots in those days, and also write sometimes. We worked at the printing press, publishing Guru Maharaja’s books, and we also traveled with Guru Maharaja when he went to various places for preaching. We were engaged in so much service.

I learned so much from both Srila Trivikrama Maharaja and Srila Vamana Maharaja; they are my siska gurus. What can I tell you about their glorious characters? I remain always indebted to them; I can never become free from their debt.

Just after taking notes and writing the articles, on the same day, the magazine would go to press, and the next morning we would offer it to Lord Narasimhadeva. In this way, Srila Gurudeva and all the devotees who assisted him used to publish the Patrika.

I have firm faith that today, on the disappearance day of Pujyapada Srila Vamana Maharaja and Pujyapada Srila Trivikrama Maharaja, the topics that the devotees have spoken about, the discussions we have heard of their glorious lives and characters, as well as the established philosophical truths that have been told – are not being spoken in the Gaudiya Vedanta Samiti. In fact, it is doubtful that they are observing this holy day. They celebrate the vyasa-puja day of Paryataka Maharaja, but not the vyasa-puja of Srila Vamana Gosvami Maharaja. I know this. There are no people who have such kind of affection for Pujyapada Srila Vamana Maharaja.

Therefore, at this place, the pastimes of Srila Vamana Maharaja have been spoken, but there in Gaudiya Vedanta Samiti, everything is spoiled.

You should always follow Guru and Vaisnavas. Always consider that siksa-guru and diksa-guru are non-different. I am very pleased that all of you are progressing in bhakti, and I am very happy with all the speakers.

[Sripad Madhava Maharaja:] So many devotees from Siliguri have come here.

[Srila Narayana Gosvami Maharaja:] After Navadvipa parikrama I will go there. If we go to Siliguri after Gaura-purnima, and Bangalore in a few days, right after Kartika, then many more devotees will be here next year. I will go to Siliguri for five or six days with all the senior Vaisnavas, and to Shilang also, and many small villages in South of Bengal. I will go to all these places.

[Srila Maharaja requested Srila Vamana Gosvami Maharaja’s senior disciple Uma didi to glorify her Gurudeva, after which he said:] She had the association of Srila Vamana Maharaja since childhood, and she took harinama from him at a young age. When she came to stay at our matha (temple) in Mathura, many of her god-brothers criticized her, saying, “She has left Guru Maharaja and is residing here with Narayana Maharaja.” They disrespected her, but on the other hand, right until the end of his manifest stay in this world, Srila Vamana Gosvami Maharaja had so much affection for her.

[Srila Narayana Maharaja called on Damodara Maharaja to glorify Srila Trivikrama Maharaja, and then he himself spoke:] Whenever Srila Trivikrama Maharaja’s parents would come to our matha, he would treat them in a rude manner and use harsh words. I was unhappy to hear this, so I told him, “You have to respect your mother and father.” He replied, “You don’t understand. If I behave very nicely towards them, then they will come here all the time and disturb my bhajana. They will harass me to come back to their village.”

He was a very good cook, and he was also very renounced. He would almost always wear simply one cloth, which would reach to just above his knees, and a sleeveless shirt – not more than that. He was always serving Vaisnavas and living very simply. In this way he spent his life.

[*Endnotes:
So our adoration, our worship is to Bhaktivinoda Thakura today , because he may bless us to make peaceful progress in Krsna consciousness. Acarya-upasana; simply by the blessings of the acaryas, we can make very rapid progress. Vedesu durlabham adurlabham atma-bhaktau [Bs. 6.33]. Yasya prasadad bhagavat-prasadat. We sing this every day. By the mercy of the spiritual master, acarya, we immediately get the blessings of the Lord. Immediately. (Srila Sac-cid-ananda Bhaktivinoda THakura’s Appearance Day Lecture – London, September 3, 1971]

[Bhaktisiddhanta Sarasvati Thakura passed away from this material world on December 31, 1936, so almost forty years has past. There are two phases: prakata and aprakata, appearance and disappearance. We have nothing to lament on account of disappearance, because Krsna and Krsna’s devotee do not disappear. Not only devotees – even the nondevotees – nobody disappears. Nobody disappears because every living entity is eternal, as Krsna is eternal. This is confirmed in the Vedic literature: “nityo nityanam cetanas cetananam.” (Katha Upaniñad 2.2.13) The description of the Supreme Lord is that He is nitya, eternal, and the living entities are also eternal; but He is the chief eternal.

So spiritually, in appearance and disappearance, there is no difference. Just like in material point of view, suppose you get a son born, you become very happy. When the same son passes away, you become very unhappy. This is material.

[People may say, "The devotee is also dying, and the non-devotee, sinful man, is also dying. What is the difference?" There is much difference. The example is given: just like a cat catching a rat in his mouth and at the same time carrying his cubs in the mouth. Superficially, we can see that the same mouth is being used, but one is feeling comfortable being carried by the mother, and another is feeling the death knell. (Bhagavad-gita Lecture 2.13, London, August 19, 1973)]

Similarly, at the time of death, the devotee is feeling that they are being transferred to Vaikuntha, whereas the ordinary sinful man is feeling that the Yamadutas, the constables of Yamaraja, are dragging him to the hellish condition of life.