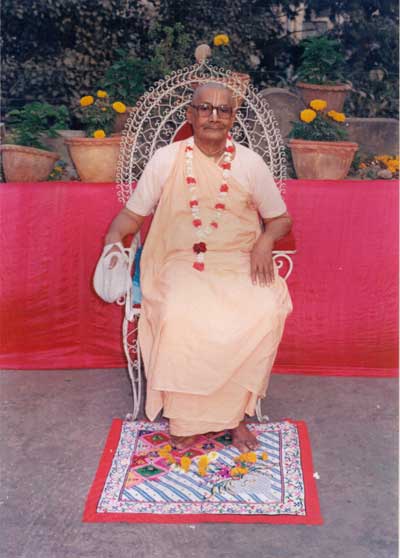 In ancient times there was an exceptionally generous king named Pautrayana Janasruti. To ensure that everyone in his kingdom was adequately fed, he established charitable boarding houses throughout his empire. One day, pleased by his generous nature, which is rare even among the heavenly beings, a group of celestial saints assumed the form of swans and, during the night, descended to the king's palace to give him their audience from the sky above. It was summer and the king was sleeping in the highest open terrace of his palace. As they flew above him, the swan flying behind all the others spoke to the swan at the front. "Do you not see the magnificent bodily effulgence of King Janasruti, glowing like bright daylight in the night sky? Do not pass through that radiance, as its blazing heat may scorch you."

Disregarding his praise, the swan flying ahead of him said, "To which fellow do you refer? You speak as if he is Sakatvan Raikva."

"Raikva is a great sage who is conversant with all that is worth knowing, for he has attained brahma-jnana (knowledge of the Absolute Truth). The pious activities performed by Raikva encompass every possible pious activity that can be performed. This is but a brief introduction of him."

King Janasruti listened in dismay as the swan decried him and glorified Raikva Muni. Disheartened by what he had heard, he restlessly reflected on the swan's words for the remainder of the night. When he awoke the next morning, he narrated the entire incident to his charioteer and then ordered him: "Go now, and seek out Sakatvan Raikva. I would like to see him in person."

The charioteer searched throughout many towns and villages, to no avail. He then returned to the king. "Search for the exalted Raikva Muni on the banks of rivers," ordered the king. "Search for him in deserted forest areas and in any other places unspoiled by the company of immoral men. These are the places where saintly personalities normally reside."

On the order of the king, the charioteer resumed his search. Finally, he came to a deserted place where he found a man sitting under a bullock cart, scratching the itches on his body. The charioteer sat down beside him and enquired from him, "O revered sage, are you Sakatvan Raikva?"

The charioteer returned to the king at once and informed him about the sage. Thereafter, King Janasruti went to Raikva Muni, bearing the gift of six hundred cows, one golden necklace and one chariot.

He offered the gifts to the muni and addressed him, "Please inform me about the deity you worship."
The king's gifts could not satisfy the saint.

"O peasant," said the muni, "you are in the grip of sorrow and envy. I would say, in fact, that you are a peasant and not a king. You can keep your necklace, chariot and all these cows for yourself."

The king became overwhelmed with anxiety and, after some time, returned to the saint. This time he
came with one thousand cows, an even more opulent golden necklace, a chariot driven by the fastest horses and his own beloved daughter. Approaching the saint and with folded hands, he begged the muni, "Please accept all these gifts. Accept my daughter as your own wife and bless me by making this village a place for your asrama. O muni, mercifully instruct me about your worshipful deity."

Raikva Muni spoke to the king again, "O grief-stricken peasant, your host of gifts is not my impetus to instruct you. You have offered me your daughter simply to impel me to instruct you. But without first rendering service to the spiritual master, what profound knowledge can you hope to elicit from him simply by offering him some remuneration (daksina)?"

After speaking in this way, Raikva Muni began instructing the king in spiritual science (brahma-vidya). He taught him to worship Vayu - the destroyer of the external world - together with Prana, or Paramatma (Supersoul) - the destroyer of the internal world - as the very form of spirit (brahma). In this way he imparted prana-vidya to the king. The place where Raikva Muni imparted these divine teachings to King Janasruti was later known as Raikvaparna, a village in the state of Mahavrsa.

The above upakhyana (moral history) from sruti teaches us the following:

Four stratums (varnas) have been created in society based on the various qualities and abilities of mankind. It is entirely scientific, natural and in accordance with the revealed scriptures to ascertain a person's varna according to his actual qualities, and not simply according to his birth. Raikva Muni had initially addressed King Janasruti as a peasant (sudra) because even though the king was a generous and affluent aristocrat (ksatriya), he had become overwhelmed with grief. Moreover, the sole reason for his lamentation had been his envy of Raikva Muni's superior fame. However, when the king understood the importance of serving the spiritual master, he was relieved from his sorrow and was subsequently granted brahma-vidya by the muni.

More often than not, we will fail to ascertain the qualifications of the spiritual master if we judge him on the basis of the apparent flaws in his nature or body or in his social conduct and personal behavior. If someone considers the spiritual master, who knows the absolute truth, to be a man of worldly intelligence and subsequently disobeys him, he commits an offence. As a result, bhakti can never arise in his heart.

Raikva Muni resided under a bullock-cart. His condition was extremely wretched and he had inflamed soars all over his body. He appeared to be just like an ordinary person who is attached to his body and bound to suffer the results of his activities. Yet, King Janasruti did not perceive his spiritual master as a mortal living being, and he was therefore qualified to learn the mystery of prana-vidya.

Srila Sanatana Gosvami Prabhu was constantly absorbed in the ecstasy of his own internal realizations, and yet he manifested the pastime of suffering from a type of leprosy. To consider him an ordinary living being, bound by the results of his past activities, is a grave offence. Therefore the scriptures have forewarned the sadhaka:

This verse declares that it is wholly inappropriate to perceive a pure devotee as mundane or lowly based on the physical or behavioral flaws visible in him. There is no possibility that a pure devotee will ever be in bad association or that he will ever offend the Lord's holy name.

Here, the term "physical flaws" refers to unattractiveness, aches and pains, deformity and the infirmity of old age. The term "behavioral flaws" refers to birth in a low caste, rudeness, laziness and so on. Sometimes, during the rainy season, the water of the Ganga becomes filled with bubbles, foam and mud. Nonetheless, Ganga does not even slightly give up her nature as liquid transcendence. In exactly the same way, self-realized Vaisnavas are not polluted by any of the flaws arising from the birth and transformations of a material body.

Surely therefore, if someone who is endeavoring to perform bhajana considers the apparent material flaws of the pure devotees (suddha-vaisnavas) to be contemptible, he will certainly become an offender.

When a Disciple Does Not Accept Discipline

Gentle punishments and reprimands by guru and Vaisnavas are highly beneficial for their disciples and servitors. The resolve to accept discipline finds its success in the title "disciple". Even though I became the disciple of Sri Gurudeva, who is most compassionate, whenever he mildly disciplines me out of his causeless mercy and with the determination to eliminate all the obstacles from the path of my devotional practice, I find it totally unacceptable. At that time, I am even audacious enough to claim that he is heartless, that he lacks affection and that he is biased, unintelligent and so forth.

I am willing to be humiliated, reprimanded and heavily beaten by maya hundreds of times, but I cannot accept or tolerate the affectionate, transcendental discipline of Sri Gurudeva. Consequently, I forever relinquish devotional service to Krsna and thus I commit spiritual suicide.

At that time, with the intention of lording it over my Gurudeva and trying to approach Sri Bhagavan directly, I become entangled in transgressing proper etiquette and, as I begin to consider myself more intelligent than my Gurudeva, I fancy myself as his instructor.

King Janasruti did not lose heart even after repeatedly hearing crude words from Raikva Muni. Therefore, Raikva Muni considered him a suitable disciple and imparted to him knowledge of the Absolute Truth. It was with this same intention that jagad-guru Srila Sarasvati Thakura Prabhupada used to chastise his most intimate disciples. He would tell all his disciples that the most important quality for anyone living in the temple is the ability to learn tolerance.

Offer Everything to Sri Guru, Including Yourself

It is not possible for someone to obtain knowledge of the Absolute Truth from Sri Gurudeva if he does not offer him all that he possesses and, indeed, his very self. It is not possible to obtain Sri Gurudeva's mercy simply by offering him material objects. Someone qualifies as a true disciple only if he becomes niskincana (without material possessions) by offering Srila Gurudeva everything he has, including his own self.

If I simply declare, "O Gurudeva, everything belongs to you alone!" but I "keep the keys to my safe with me", then I am revealing that I do not trust him, which is not at all indicative of the most elevated stage of genuine service to Sri Guru (guru-seva). When the disciple surrenders from within and keeps nothing as his own, then Srila Gurudeva considers that intimate and loving disciple (visrambha-snigdha sisya) as his own.

When the bhakta fully dedicates himself at the time of receiving diksa, Sri Krsna makes him as spiritual as Himself, permeating the bhakta's body with transcendence and bliss. With his spiritual body, the bhakta then worships Krsna's lotus feet.

This is why Raikva Muni had said to King Janasruti that one cannot become the servitor of Sri Guru just by offering him material objects. Only if the disciple offers everything to Sri Guru, including his very self, can he attain spiritual knowledge (brahma-vidya). That is to say, he will be able to perform transcendental guru-seva.