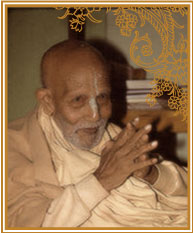 Tridandi Swami Srimad Bhakti Promode Puri Gosvami Maharaja appeared on October 8, 1898 during the auspicious hour of brahma-muhurta. Along with the study of Sanskrit, Promode Bhusan was engaged in worshipping family Deities of Sri Sri Radha Gopinath.

His reverent service mood was evident even as a young man. Once he forgot to cover the Lord with a blanket on a winter night. That night he shivered uncontrollably with chills and fever. The Lord appeared in a dream and showed him that he was without his blanket. The young Promode Bhusan woke up and only after he covered the Lord did the fever subside.

Promode Bhusan completed his education in Jessore then went to Calcutta where he attended Bangabasi College, graduating with honors in Chemistry. In 1917, he met his Guru, Prabhupada Srila Bhakti Siddhanta Saraswati Thakur. From the first meeting, an eternal bond was made. Sri Promode Bhusan accepted Prabhupada in his heart as his eternal master.
His strong attachment to spiritual life brought him regularly to his Guru's lectures at the Calcutta ashram of Sri Gaudiya Math. In 1923, on the holy occasion of Sri Krishna Janmastami, he surrendered at his Guru's lotus feet and simultaneously took Harinama and Brahmin initiations. He became known as Sri Pranabananda Brahmachary--a full-fledged member of Sri Gaudiya Matha.

Sri Pranabananda's service attitude was so exemplary that soon Prabhupada Srila Saraswati Thakur established him as the editor of Gaudiya Matha publications. Pranabananda Brahmachary synopsized Srila Saraswati Thakur's lectures, elaborated on them, and with Prabhupada's approval, they were published in various periodicals including the only daily spiritual newspaper, Dainik Nadia Prakash.

At the time of Prabhupada's aprakatalila, Sri Pranabananda Brahmachary held his guru's lotus-feet to his chest so that they might remain forever enthroned in his heart. After Srila Prabhupada's disappearance Sri Pranabananda Brahmachary Mahopadeshak Pratna Vidyalankar began extensive traveling and preaching.
In 1942 Srila Prabhupada Saraswati Thakur appeared in a dream and gave his divine order that Sri Pranabananda accept Tridandi sannyasa. Sannyasa initiation and the danda were given by his Godbrother Srila Bhakti Gourava Vaikhanasa Maharaja in Champahati Sri Sri Gaura-Gadadhara temple.

For more than seven years, Tridandi Swami Bhakti Promode Puri Gosvami Maharaja served as the head pujari and temple president of Sri Sri Yogapith, the birth place of Sri Chaitanya Mahaprabhu, discovered by Srila Bhakti Vinode Thakur. During that time, the Deities were internally urging him to take up scriptural research and deeper meditation.

He moved to a humble cottage on the banks of the Ganga in Kalna, living with his beloved Deities Sri Sri Radha Gopinath. During that time, the Kind of Burdwan (a district of West Bengal) was extremely impressed with his saintly character and on the appearance day of Sri Radhika, 1958, he offered his large temple to Srila Puri Maharaja. He engaged in service at that temple for several years.

Later, his Godbrother, Srila Bhakti Dayita Madhab Gosvami Maharaja, requested that Gurumaharaj come to his Matha to edit spiritual periodicals and books. Gurumaharaja entrusted the temple in Kalna to his younger brother and went to Calcutta to take up his new service. Additionally, His Holiness Om Visnupada Tridandi Swami Sri Bhakti Dayita Gosvami Maharaja requested that he take full charge of his monthly magazine, Sri Chaitanya Vani, as president of the editorial board. He also became editor-in-chief of the monthly magazine Sri Gaudiya published from Sri Chaitanya Math, Mayapur. At the age of 100, Srila Puri Maharaja continues to fulfill this role with great care and devotion.

Presently, Gurumaharaj is the senior most living disciple of Srila Bhaktisiddhanta Saraswati Thakur. Additionally, he was the lifelong, intimate associate of His Divine Grace Srila Bhakti Raksaka Sridara Dev Gosvami Maharaja, who he considered the benign guardian of the celestial wealth of Srila Rupa Gosvami.

Srila Puri Maharaja was well known as the best kirtana leader in the early days of Sri Gaudiya Math and often sang on radio programs. He is well known for his extensive knowledge and meticulous practice of deity worship and installation. His service to Srila Saraswati Thakur installing deities in new temples made him known as Pujapada.

In addition to his high position and qualifications, many are attracted to Tridandi Swami B. P. Puri Gosvami Maharaja's divine personality. He emanates sweetness and love. He is seen as our well-wishing guide to the spiritual domain. The opening of the Gopinath Gaudiya Matha, during the 1989 Gour Purnima Tithi, provided a doorway to that spiritual domain.

Our humble prayer is that we may always be situated at his holy lotus feet which are our only access to the predecessor Acaryas and their divine teachings. We pray that we may be engaged in the eternal service of Sri Guru and Gauranga and Sri Sri Radha Gopinath under the divine direction of Srila Bhakti Promode Puri Gosvami Maharaja.
(Reprinted from the Srila Bhakti Promode Puri Gosvami Maharaja's 1996 Vyasa Puja Book)