The Deep Meaning Of Vyasa-puja 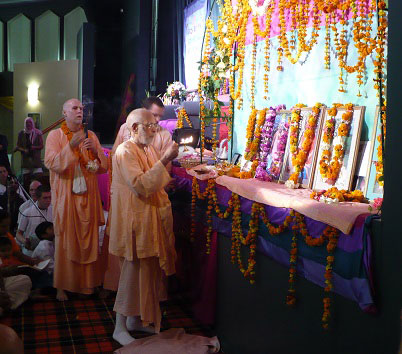 I have seen how my Gurudeva and his god-brothers used to observe their Vyasa-puja. They used to worship their guru and entire guru-parampara, because the knowledge of Krsna and bhakti, or pure devotion, to Krsna does not come only from guru. Where did guru receive this from? He received it from his gurudeva, His gurudeva received from his gurudeva, and so on. In the end, we see that Krsna is jagat-guru: "Krsnam vande jagat-gurum."

Krsna gave His own tattva (the established truths of His reality), His own bhakti:

["By My causeless mercy, be enlightened in truth about My personality, manifestations, qualities and pastimes. (Caitanya-caritamrta, Adi-lila 1.52)]

["O expert and thoughtful men, relish Srimad-Bhagavatam, the mature fruit of the desire tree of Vedic literatures. It emanated from the lips of Sri Sukadeva Gosvami. Therefore, this fruit has become even more tasteful, although its nectarean juice was already relishable for all, including liberated souls."]

This transcendental Srimad-Bhagavatam – bhagavat-prema – was in Goloka-Vrndavana. The parrot Suka (who appeared in this world as Sukadeva Gosvami) took that fruit of Bhagavatam in his mouth and tasted its sweetness; and simply by his tasting it, that fruit became most sweet. Sukadeva Gosvami then brought that fruit from Goloka-Vrndavana to this Earth and gave it to Pariskit Maharaja. And gradually, up to the present time, this knowledge and prema is coming by guru-parampara. We are very indebted to our guru-parampara.

Srila Bhaktivinoda Thakura collected findings on the process for performing Vyasa-puja, Srila Prabhupada Bhaktisiddhanta Sarasvati Thakura used it as well, and Guru Maharaja published it. From that time onward, we have been worshiping guru-panchaka, krsna-panchaka, acarya-panchaka, vyasa-panchaka, upasaya-panchaka, and panca-tattva-panchaka. There are seven panchakas. [*Please See Endnote 1]

The person sitting on the seat of acarya, the seat of Vyasadeva, must follow all these principles, giving proper respect to all the acaryas in disciplic succession. This is called Vyasa-puja.

["Before reciting this Srimad-Bhagavatam, which is the very means of conquest, one should offer respectful obeisances unto the Personality of Godhead Narayana, unto Nara-narayana Rsi, the supermost human being, unto mother Sarasvati, the goddess of learning, and unto Srila Vyasadeva, the author." (Srimad-Bhagavatam, 1.2.4)]

Narayanam – First offer pranama (obeisance) to Narayana. Naram caiva narottamam – Next, offer pranama to Nara-Narayana Rsi, from whom the knowledge of Srimad-Bhagavatam came down. Here [this succession is known as the Nimbaditya sampradaya] there is also a guru-parampara. First, Sankarsana gave it to Nara-Narayana Rsi [to Sri Narayana], and Sanaka, Sanatana, Sanandana, and Sanat Kumar are also present in that parampara. Thus, it came down in disciplic succession. [From Nara-Narayana Rsi it came to Hamsa, and then to the four Kumaras.] In this way, Srimad-Bhagavatam comes from Goloka-Vrndavana through guru-parampara [through the four Vaisnava sampradayas, or disciplic lines.]. [*See endnote 2] [The bracketed words in this paragraph were written by the editor, based on the information in Srila Bhaktivedanta Narayana Gosvami Maharaja's book, Cara Acarya and Gaudiya Darsana.]

Always remember what I have told in these classes. Try to achieve pure devotion and be situated in your transcendental form. In this way, very soon you will see that you are serving Yugala-Kisora (the youthful divine couple)