No Control Over Freedom 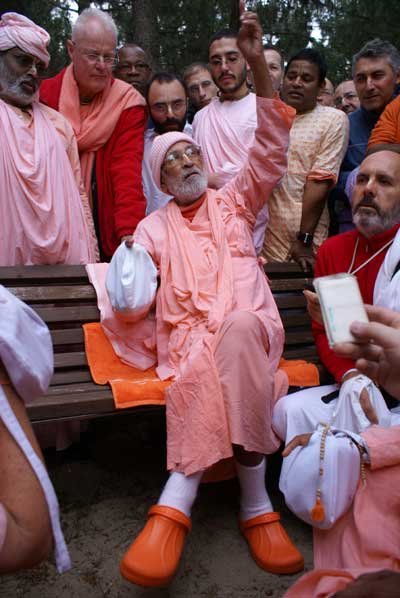 [Srila Narayana Gosvami Maharaja:] The topic of Sri Raya Ramananda’s conversation with Sri Caitanya Mahaprabhu is very high, very high. It is very difficult to even touch by one’s intelligence. The first part is not difficult to understand. It is the second part that is difficult – the part from which Raya Ramananda begins to discuss pure bhakti, then bhakti-rasa, then sakhya, (friendship) vatsalya, (parental love) madhurya (conjugal love) and sumadhura, (Srimati Radhika’s service mood), and then the process to obtain that most exalted love. It is so high; it is the most elevated chapter in Sri Caitanya-caritamrta. This manifestation of Sri Caitanya Mahaprabhu – rasaraja-mahabhava – this is not told even in Krsna-lila. In Krsna’s pastimes we read about Radha and Krsna, but not about this.

[Devotee:] Srila Gurudeva, you said that an aspiring devotee who is reading Bhagavad-gita and starts chanting the maha-mantra mostly chants nama-aparadha (offensive chanting), and sometimes nama-abhasa (chanting in the clearing stage). My question is this: When we go on nagara-sankirtana, so many people hear the maha-mantra. They don’t know any rules or regulations and they chant without faith and without offenses (asraddha nama-abhasa). You said when the aspiring devotee chanting is in the bodily conception of life, his chanting is nama-aparadha. But those new people, who are innocent, who don’t know anything, what kind of chanting and hearing are they doing?

[Suddhadvaiti Maharaja:] In “Brahmana and Vaisnava”, a book by Srila Bhaktisiddhanta Sarasvati Thakura, it is written that when the jiva falls down from the tatastha region, he first becomes Lord Brahma in one of the universes. He becomes one Lord Brahma.

[Srila Narayana Gosvami Maharaja:] If hundreds of millions of jivas are coming from the tatastha realm to this world at the same time, will they all become Brahma?

[Suddhadvaiti Maharaja:] They will become Brahma, but not in the same universe. They will be Brahmas in different universes. It is written in that book by Bhaktisiddhanta Sarasvati Thakura.

[Madhava Maharaja:] I read the entire book a few months ago, and I never saw that statement there.

[Suddhadvaiti Maharaja:] I have the paper in my…

[Srila Narayana Gosvami Maharaja:] I doubt that it is there.

[Suddhadvaiti Maharaja:] My question is this: When we go walking, we see billions of blades of grass. How did those blades of grass come from a high position to that lowly position as grass?

[Srila Narayana Gosvami Maharaja:] It is by their free will.

[Suddhadvaiti Maharaja:] What kind of karma makes one fall down from the human form all the way down there?

[Srila Narayana Gosvami Maharaja:] The analogy is given of a very small seed. If that seed is thrown on the edge of a sword’s blade, it will immediately fall on one side or the other. It will not remain on the blade’s edge.

Even without the fruit of karma, it will go here or there. Similarly, even without being subjected to enjoying or suffering the fruit of one’s past activities, because the jiva’s nature is to be tatastha (marginal), he must always choose this or that. He must go from the tatastha realm.

[Ashrama Maharaja:] But where is the free will? It seems like there is no free will. The jivas are going either here or there.

[Srila Narayana Gosvami Maharaja:] Krsna has given them independence, free will, whether they are in the realm of tatastha-sakti or once they become conditioned souls. That independence must always be with them. Even when they become liberated, that tatastha-bhava (the mood of the marginal living being, with the free will to choose) will be present within them.

[Ashrama Maharaja:] But when he hits that demarcation, or that sharp edge of the blade, going this way or that way…

[Srila Narayana Gosvami Maharaja:] In all situations the jiva has his natural, intrinsic marginal nature, and this is also true when he is in Goloka Vrndavana. However, there in Goloka Vrndavana, Yogamaya, always protects him; so he never falls to this world from there.

Krsna never interferes with his freedom. Wherever he wants to go, he can go.

[Suddhadvaiti Maharaja:] The human form is a platform on which one performs karma. How does one fall from human life all the way down to being a blade of grass?

[Srila Narayana Gosvami Maharaja:] They want that? Well, what can we do?

[Suddhadvaiti Maharaja:] Who would want to be a blade of grass?

[Madhava Maharaja and others:] Uddhava.

[Srila Narayana Gosvami Maharaja:] Why would he not want to be a blade of grass? In that way Krsna will walk by him and the gopis will walk by him. In this way he would be bathed by the dust of their lotus feet.

[Devotee:] One little question, Gurudeva. I heard that one can go to Vaikuntha by chanting namabhasa. Is this true?

[Srila Narayana Gosvami Maharaja:] At first Ajamila chanted nama-abhasa, and by that chanting a platform was created to ready for him for going to Vaikuntha. Then his gurus, the four Visnu-dutas, taught him about suddha-nama. Later on, by his chanting of suddha-nama, he actually went to Vaikuntha.

[Srauti Maharaja:] At the time of the jiva’s choosing which way to turn, he may look left and right. What does he see exactly?

[Srila Narayana Gosvami Maharaja:] Try to understand that both are the same.

[Srila Narayana Gosvami Maharaja:] Krsna is ‘smaller than the smallest,’ [*See Endnote 1] but still He has form. In the same way, although, by one’s transcendental nature one is infinitesimal [1/10,000 the tip of a hair particle] but he has a very good form. He can be like a mountain, or he can be in a blade of grass, smaller than an ant.

And certainly he wears clothing. Is Krsna naked?

[*ENDNOTE 1: He is smaller than the smallest. The living entity is one ten-thousandth part of the tip of a hair, but the Lord is so inconceivably small that He enters into the heart of this particle. Therefore He is called smaller than the smallest. As the Supreme, He can enter into the atom and into the heart of the smallest and control him as the Supersoul. Although so small, He is still all-pervading and is maintaining everything. By Him all these planetary systems are sustained. We often wonder how these big planets are floating in the air. It is stated here that the Supreme Lord, by His inconceivable energy, is sustaining all these big planets and systems of galaxies. The word acintya ("inconceivable") is very significant in this connection. God's energy is beyond our conception, beyond our thinking jurisdiction, and is therefore called inconceivable (acintya). Who can argue this point? He pervades this material world and yet is beyond it. We cannot comprehend even this material world, which is insignificant compared to the spiritual world—so how can we comprehend what is beyond? (Bhagavad-gita, 8.9, Purport)]