The Glory of Sri Radha

[In 2007, in honor of Sri Radhastami, Srila Bhaktivedanta Narayana Gosvami Maharaja gave two discourses on the glories of Srimati Radhika; one on the eve of Radhastami and one on the following morning. Srila Maharaja spoke in his mother tongue, Hindi, and his words were simultaneously translated by Akhilesh dasa Adhikari into the headphones of the English speaking devotees in the audience. This is his discourse of Radhastami eve. ]

Sri Krsna was present at Vamsivata, the place of the rasa dance, but He was not happy. He wanted to perform loving pastimes but He was all alone. Srimati Radharani then appeared from His left side, and Sankara (Siva), Sri Gopisvara, appeared from His right side as guru-tattva. Radha ran to Krsna with great pleasure. Ra is for anuragi, meaning ‘deep spiritual loving attachment,’ and dha is for dhavati, which means ‘to run very fast, with great eagerness.’ Krsna worshiped that very Radha, and therefore Her name became Radhika.

When Krsna first appeared in Gokula, Narada came for His darsana and thought, “Krsna never appears alone; His hladini-sakti must also have been born.”

In the meantime, Vrsabhanu Maharaja was staying in Raval, where he daily took bath in the river Yamuna. One day, fifteen days after the birth of Lord Krsna, just after taking his bath, Vrsabhanu Maharaja saw a thousand-petaled lotus flower in the Jamuna. In the middle of that lotus flower was a beautiful baby girl sucking Her thumb and moving Her hands and legs. Seeing Her, he immediately picked Her up, took Her in his arms, brought Her to his wife Kirtika, and placed Her on Kirtika’s lap. Not many people know Radhika as the daughter of Kirtika-devi; they mostly know Her as the dear daughter of Vrsabhanu Maharaja.

Just after the appearance of that baby girl, Narada went to Vrsabhanu Maharaja’s home and inquired from him, “Has there been any child born of you?”

Narada then blessed Sridama and asked, “Has there been any child born more recently?”

Vrsabhanu Maharaja replied, “Yes, a few days ago a daughter was born; I was blessed with a daughter.”

Narada asked Vrsabhanu Maharaja, “May I see your daughter? I want to do Her chart and bless Her. I will describe Her future qualities. Please gather candana, Yamuna water, and other paraphernalia so that I can perform a ceremony to bless Her.”

Vrsabhanu Maharaja then went inside the house and Narada entered a trance of meditation. While he was meditating, that baby girl manifested an exquisite youthful form. Lalita and Visakha were also present, and Lalita told him, “Why are you continuing to meditate; stand up and offer your obeisances.”

Narada then received a one-moment darsana of Radhika, but because his thirst to see Her was not quenched, he went to Narada-kunda and performed austerities for thousands of years, without eating, and continually chanting Radha mantra-japa. At that time Radharani appeared to Him, gave him Her service, and he became Naradiya gopi. We know these details from sastra.

Srimad-Bhagavatam states, “Ete camsa-kalah pumsah krsnas tu bhagavan svayam – Krsna is the original Supreme Personality of Godhead.” Although Sri Krsna is the supreme worshipful Lord of all, He Himself worships Sri Radha. The aim of the author, Srila Vyasadeva, in manifesting Srimad-Bhagavatam was to describe Sri Krsna’s pastimes with Srimati Radhika and to establish Her glories. Srila Sanatana Gosvami and Srila Visvanatha Cakravarti Thakura say that rasa-lila, the most exalted pastime in Srimad-Bhagavatam, was performed for the sake of Srimati Radhika. Krsna personally told Her, “It is for You that I reside in Vraja.”

[“Millions of cowherd damsels are unable to please the mind of Madhava although endeavoring to do so.”

“The flute song calls the name of Radhika – ‘Come here, come here, Radhe!’ Syama calls out in the night. (verse 12)

“When the sri-rasa-mandala comes to a halt in search of Beloved Radha He then goes. (verse 13)

“Please appear, O Radhe! Kindly save My life!” calling out while weeping Kan in the forest. (verse 14)

“In a secluded grove embracing Radhika regaining His life and soul, Hari is relieved. (verse 15)

“Saying, ‘Without You, where is the rasa dance? Only because of You do I live in Vraja.” (verse 16)

“At the lotus feet of such a Radhika this Bhaktivinoda says weeping, (verse 17)

“’Among Your personal associates please count me also; making me Your maidservant keep me as Your own.’” (verse 18)]

Even though millions of gopis were also present in the arena of rasa, they could not attract Krsna’s mind when Radhika disappeared from rasa-lila. Radharani first disappeared from the rasa-lila, in maan; Krsna did not disappear from there alone. He left the rasa dance to search for Her. Very worried and crying, “Radhe Radhe,” He finally found Her.

The other gopis, who had left the rasa dance to search for Krsna, now saw two sets of footprints. One set was Krsna’s footprints, and the other, smaller and more delicate set belonged to a lady.

Lalita and Visakha and the other gopis of Sri Radha’s party, who had been searching both Radha and Krsna, knew that this second set of footprints belonged to Srimati Radhika. Very pleased, they thought, “Oh, Krsna is not alone; He has taken our prana-priya (dearmost) sakhi with Him. At the same time, however, they were sad, thinking, “We can’t serve Her now, because we are not with Her.”

The other gopis, those who are not in Radha’s party, uttered this verse:

[“Certainly this particular gopi has perfectly worshiped the all-powerful Personality of Godhead, Govinda, since He was so pleased with Her that He abandoned the rest of us and brought Her to a secluded place.” (Srimad-Bhagavatam, 10.30.28)]

“Oh, this girl who is with Krsna is so fortunate. Krsna has taken Her and has thus broken our pride (saubhagya-mada).” They understood that this girl was superior to them: “She had surely served Narayana and pleased Him, and due to Narayana’s blessing upon Her, Krsna took Her alone.” Thus, Radhika is the topmost of all of Krsna’s beloveds, and rasa-lila was performed in order to establish Her superiority. It was performed for Her pleasure.

After all the gopis sang their song of separation, Krsna appeared to them and uttered this verse:

[“I am not able to repay My debt for your spotless service, even within a lifetime of Brahma. Your connection with Me is beyond reproach. You have worshiped Me, cutting off all domestic ties, which are difficult to break. Therefore, please let your own glorious deeds be your compensation. (Srimad-Bhagavatam, 10.32.22)]

“Oh gopis, for My sake you left your shyness, the instructions of your superiors, and your lives as householders, which were meant to keep you bound. By your saintly nature, may you free Me from My debt.”

One of the ways in which Radhika pleases Krsna is by entering into the loving stage called maan, Her sulky mood of affectionate jealous anger towards Him. Sometimes Her maan has no external cause, and sometimes it has a cause. The vipaksa (rival) gopis headed by Candravali criticize Radharani by saying, “She doesn’t feel ashamed or shy to do maan? I don’t want to see Her face.” On the other hand, Radhika criticizes Candravali, “Candravali knows nothing about pleasing a beloved. She doesn’t know how to do maan.” Candravali’s affection for Krsna is grta-sneha, very smooth. Radhika’s affection is madhu-sneha, like madhu, honey, which is smooth and also sweet. Candravali’s affection is compared with ghee, which needs sugar to become sweet, but madhu is sweet on its own. 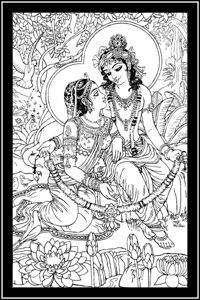 The stages of Radhika’s love are adiruddha, mohan and madan mahabhava. These stages of love are so elevated that Krsna Himself cannot experience them. Therefore, in order relish them, Krsna appears in Sri Navadvipa dhama, along with His associates, in the form of Sri Caitanya Mahaprabhu. For this same purpose, Mahaprabhu went to see Sri Raya Ramananda at Godavari and asked him many questions.

In Sri Krsna’s pastimes, Raya Ramananda is Visakha-devi, Radharani’s gopi friend, who understands all of Radharani’s moods. This very same Visakha, in the form of Raya Ramananda, trained Mahaprabhu in realizing these moods. After their meeting, Mahaprabhu told him, “I am so pleased; this is why I came. My desires are now fulfilled. Please come to Jagannatha Puri and help Me there.”

Tomorrow morning we will sing the glories of Radha and perform abhiseka (Her bathing ceremony). We will also offer puspanjali (the flowers of our hearts) by describing Her glories in detail. Then we will go out with nagara sankirtana to householder devotees’ homes to collect gifts for Srimati Radhika, as we do every year. Then we will return to the Matha, with kirtana, and bring all the presents to the altar. Then we will all sit together and participate in kirtana in the Matha.