The Glory of Sri Radha (Part 2)

Throughout Raval and Varsana, the residents celebrated Radhastami yesterday. This is because they do not deeply contemplate the tithis (Vedic time periods). They do not see whether or not a tithi (like a date) is pure. In the Vaisnava sampradaya, however, the consideration of the tithis is very important. We deliberated on this matter, and therefore we are celebrating Sri Radhastami on this day. [For this particular day, when there is a mixture of two tithis at sunrise, or the previous day’s tithi (saptami) is still present, it is called ‘impure.’ In that case we observe Radhastami on the next day]

Even Sri Krsna is unable to fully describe the qualities of Srimati Radhika.

[“The transcendental goddess Srimati Radharani is the direct counterpart of Lord Sri Krsna. She is the central figure for all the goddesses of fortune. She possesses all the attractiveness to attract the all-attractive Personality of Godhead. She is the primeval internal potency of the Lord.” (Caitanya-caritamrta, Adi-lila, 4.83)]

Srimati Radhika is the goddess of all goddesses. The word krsna-mayi in the above-mentioned verse means that all of Her bodily limbs are composed of mahabhava, the highest, ecstatic love for Krsna. She anoints Herself with the sneha, or affection, of Krsna, and also with the affection of Lalita, Visakha, and Her other sakhis.

Srila Raghunatha dasa Gosvami explains in his poetry how She takes Her bath. He writes (in Sri Caitanya-caritamrta, Madhya-lila 8.162-167):

Sri Krsna is the Supreme Personality of Godhead, the supreme worshipful Lord (deva). He is not a demigod; He is the master of all the demigods. At the same time, His worshipable goddess (para-devata) is Sri Radha in Radha-kunda, especially when She is in maan. He takes bath in Radha-kunda three times. In deep meditation He chants, “Radhe Radhe,” and She becomes pleased.

Once, as Sri Jayadeva Gosvami was composing the verses of his Sri Gita-govinda, a pastime appeared in his heart in which Srimati Radhika entered Her sulky mood (maan). He saw in his mediation that all of Krsna’s repeated attempts failed to remove Her maan. Then, the mood entered his heart in which he understood that in order to pacify Srimati Radhika Sri Krsna placed His head at Her lotus feet. This filled Sri Jayadeva with fear; he could not bring himself to write it. He thought, “Sri Krsna is everyone’s worshipful Supreme Lord and He possesses all potencies. Srimati Radhika is His potency and maidservant. How is it possible for Sri Krsna to put His head at Radhika’s lotus feet? That would transgress the principles of religion.”

His hand trembled and lost the grip of his pen. He could write no more, so he went to bathe in the Ganga. Meanwhile Sri Krsna, the topmost relisher of transcendental mellows, assumed the form of Sri Jayadeva and went to his house. In the form of Jayadeva, Krsna asked Padmavati to bring Him the manuscript. He then personally completed the verse “smara-garala-khandanam – the deadly poison of amorous love” that Jayadeva had begun to write. He added “mama sirasi mandanam / dehi pada-pallavam udaram – is counteracted by decorating My head with Your flower-like feet.”

[“The beautiful flower blossoms of Your feet counteract the deadly poison of amorous love. They extinguish the terrifying fire of the pain of that love, which rages within My heart. Therefore, please be kind and allow Your feet to decorate My head.”] 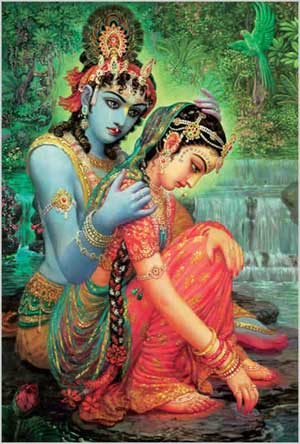 Sri Krsna then left the house, and a short time later Jayadeva returned. Surprised, his wife asked, “How were you able to come back so quickly? Just a short while ago you returned, wrote something in your book, and again went out to take bath.” Jayadeva Gosvami asked for his manuscript, and upon opening it he saw that his unfinished verse was now complete. Filled with wonder and weeping, he told his wife, “O Devi, you are blessed. You had darsana of Sri Syamasundara Krsna, who personally came here and completed the verse I was afraid to write. Krsna is brought under control by prema, not by devotion based on rules and regulations.”

We cannot imagine the glories of Radharani. She is sarva-laksmi, the sum-total of all Laksmis, or goddesses of fortune:

[“You are worshiped by Sri Laksmi, the goddess of unlimited millions of Vaikuntha planets. Sri Parvati, Indra’s wife, and Sarasvati all worship and attain benedictions from You. Meditation on even one of Your toenails grants an infinite variety of perfections – O Srimati Radhike, when, oh when will You bestow upon me Your merciful sidelong glance? (Sri Radha-Krpa-Kataksa-Stava-Raja, verse 11)

You are the mistress of all kinds of sacrifices (especially of the topmost yugala-milana-yajna); of all actions (since You are the root of all potencies – mula-sakti-tattva); of the mantras uttered at yajnas and of the sacrificial offerings presented to the demigods; of all the demigods; of the words of the three Vedas; of the enforcement of all scriptural principles; of Sri Rama-devi (the goddess of fortune); of Sri Ksamadevi (the goddess of forgiveness); and especially of the delightful kunjas in Vrndavana. When will You mercifully make me Your dasi and grant me the qualification to render service in Your amorous pastimes with the prince of Vraja? O Srimati Radhika, owner and maintainer of Vraja, I offer pranama unto You time and again.” (Sri Radha-Krpa-Kataksa-Stava-Raja, verse 12)]

These are Her qualities.

Brahma and Sankara cannot attain the darsana of Her lotus feet, and even Krsna has worshipped Her feet. She is sarva-laksmi, the embodiment of all goddesses of fortune, and sarva-kanti, the only one who fulfills all the transcendental desires of Sri Krsna. Others, like Candravali, Lalita and Visakha can somewhat fulfill His desires, but not all of them. Krsna thinks, “If Radhika is not participating in the rasa-lila, then what is the use of it?” He broke the pride of the other gopis and left to find Sri Radha. Thus, She is para-devata, the supreme worshipful Deity.

The glories of Radhika are innumerable. Now the Vaisnavas in this assembly will glorify Her. She will not be as much pleased with the abhisekha (bathing ceremony) as She is with the chanting of Her glories. 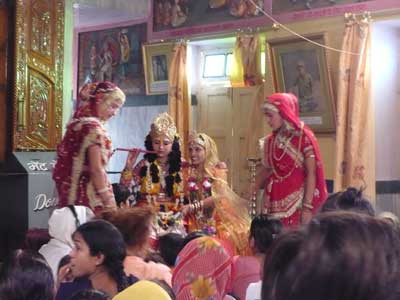 A play depicting Sri Sri Radha and Krsna's pastimes was performed in the evening, for the pleasure of Srila Narayana Gosvami Maharaja and the devotees.