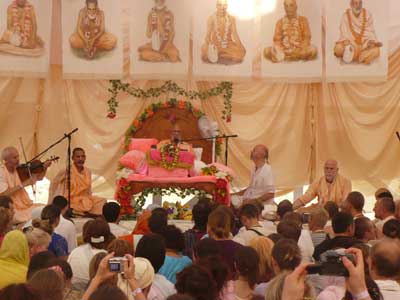 [Moscow was overwhelmed with an unusual and abnormal heat wave in August. It was over 40 degrees Celsius everyday and the usual weather at that time was 20 or 21 degrees. The weather at 5:00 pm (the usual time that Srila Maharaja would give class) was too hot for him. Therefore, the festival organizers decided that the only way the Moscow 2010 Harikatha Festival could continue with Srila Narayana Gosvami Maharaja giving lectures would be for him to do so in the morning, at 6am, when the weather was cool. Due to the weather, the time of the day, and his health, Srila Maharaja spoke for 15 minutes, and then went back to his room. He instructed the sannyasis to continue speaking from the Srimad-Bhagavatam for the next hour, as he would also do if he would be physically present. Here is a transcription of that beautiful discourse.]

Srila Vyasadeva was no ordinary man. [He is the literary incarnation of God, the manifestation of Lord Narayana who manifested all the ancient Vedic literatures.] He first compiled Vedanta-sutra, which I am going to publish. But this scripture was very, very difficult for people of this age to understand, and therefore he wrote the Mahabharata and so many Puranas. Moreover, it was in the Mahabharata that all eighteen chapters of Sri Bhagavad-gita were situated.

But he was still not satisfied; he was lamenting. In the meantime his guru, Narada Rsi, arrived at his asrama. Narada asked, "Are you satisfied?"

Vyasadeva replied, "No, Gurudeva, I am not satisfied. Narada said, "You have compiled the Vedanta-sutra, fifty-six Puranas, and the Mahabharata in which Bhagavad-gita is contained. Why are you not satisfied?"

Vyasadeva replied, "Gurudeva, I don't know. You can tell me; you are all-knowing."

Narada kindly said, "In all of your books you have only explained dharma (religion), artha (economic development), kama (sense gratification) and moksa (liberation). All these are rotten subjects; no one can be satisfied by them.

"Have you written about the glories of Krsna? Have you written that even though He is the Supreme Lord, Mother Yasoda bound Him with rope. He who is unlimited, up and down, right side, left side, and everywhere – that Supreme Lord was bound and was weeping. His weeping was not imitation. He was really weeping, and thinking, 'If My mother doesn't love Me, then where will I go?'

Narada continued, "Have you written that Krsna was controlled by the gopis, and that He performed rasa dance with them? During that rasa dance pastime with them He told them:

["I am not able to repay My debt for your spotless service, even within a lifetime of Brahma. Your connection with Me is beyond reproach. You have worshiped Me, cutting off all domestic ties, which are difficult to break. Therefore, please let your own glorious deeds be your compensation. (Srimad-Bhagavatam, 10.32.22)] 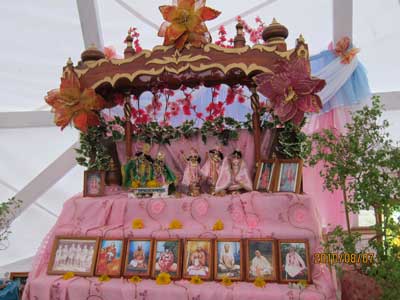 He told them, "O gopis, I cannot repay you. If I will ask you how I can repay you, you will say, "Give us Your service. We want to serve You. Whatever You want, we will give You."

Vyasadeva replied, "Gurudeva, I don't know all these topics."

Narada told him, "You can only know these topics by bhakti-yoga. Krsna is controlled by bhakti (pure loving devotion)."

We defined pure bhakti (uttama-bhakti) yesterday, and that bhakti is supremely situated in Radhika. In fact, bhakti is Radhika.

Narada continued, "You should see all these things by dint of your trance in bhakti-yoga. By bhakti-yoga you will realize all of Krsna's pastimes. I am going now."

Narada then left, after which Vyasadeva meditated and saw all the sweet pastimes of Krsna, from beginning to end.

["Thus he fixed his mind, perfectly engaging it by linking it in devotional service [bhakti-yoga] without any tinge of materialism, and thus he saw the Absolute Personality of Godhead along with His external energy, which was under full control." (Srimad-Bhagavatam, 1.7.4)

What is the meaning of purna-purusa (the Absolute Personality of Godhead) in this verse?

Srila Vyasadeva saw the birth of Krsna in Gokula, Vrndavana, and he saw that Krsna took birth partly in Mathura by Devaki. He saw that even though Krsna is the Supreme Lord, He was stealing butter in the houses of all the gopis.

He saw that unlimited jivas (living entities), those jivas who were neglecting Krsna, were coming down to this material world and feeling so much misery and difficulties – as we do. He saw that some jivas were remembering Krsna, and were going to Goloka Vrndavana. 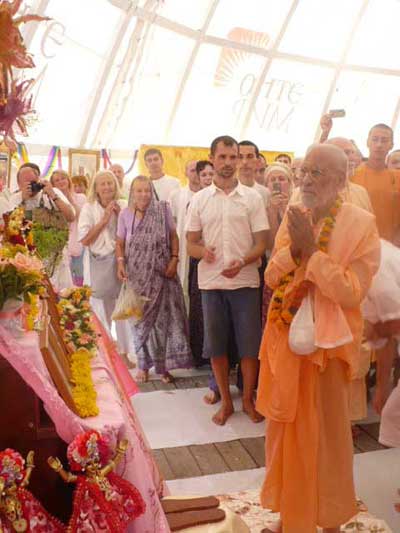 He saw Brahmara-gita, Venu-gita, and Gopi-gita. He saw everything from top to bottom, including Krsna's pastimes in Mathura and Dvaraka.

Seeing all this in his samadhi trance, he wrote all the sweet pastimes of Krsna from First Canto of Srimad-Bhagavatam to the Twelfth Canto, and then he was satisfied.

He then saw that there was no qualified disciple who could write and tell all these pastimes and philosophical truths. By chance his son was Srila Sukadeva Gosvami, and Sukadeva Gosvami spoke the Srimad-Bhagavatam to Pariksit Maharaja. It is from there that, even today, all these bhagavat-katha (narrations of Krsna's glories) are coming:

["Simply by giving aural reception to this Vedic literature, the feeling for loving devotional service to Lord Krsna, the Supreme Personality of Godhead, sprouts up at once to extinguish the fire of lamentation, illusion and fearfulness." (Srimad-Bhagavatam, 1.7.7)]

Now so many speakers will speak.