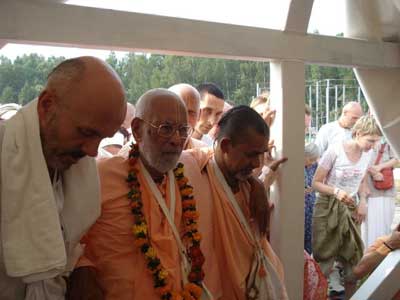 [On the first day of the 2010 Moscow Harikatha Festival, Srila Narayana Gosvami Maharaja began discussion on the Srimad-Bhagavatam. He began with the opening of the First Canto, and, with the assistence of his sannyasis, by the last day he was up to the Tenth Canto. On that cool August 11th morning, at 6am, just after his morning walk, Srila Maharaja entered the large dome temple and began his final class. Of all the Tenth Canto subjects he could have chosen, with a deep mood he decided to discuss the pastime of Krsna accepting prasadam from the wives of the brahmanas:]

One day, Sri Krsna and Baladeva Prabhu went out for cow-herding with their friends. Their mothers had sent foodstuffs to Bandiravana, but by mistake the boys went to the border of Mathura and Vrndavana. In that area there were only asoka trees there – no other plants – and nearby there were brahmanas performing a yajna (a sacrifice).

All the cowherd boys told Krsna and Baladeva Prabhu, "Today, we are very hungry. Please tell us how to satisfy our hunger." Krsna replied, "Nearby, there are brahmanas performing a yajna, and in this yajna they will be giving alms of foodstuffs. Go and tell them that Krsna and Balarama have come here by mistake, and we are very hungry. They will certainly give something to you."

The cowherd boys went to the yajna and requested, "O godly brahmanas, please give us foodstuffs. In this yajna, foodstuffs can be given." The brahmanas heard the boys' request, but at the same time they did not hear. They became silent, and said neither "Yes" nor "No." The cowherd boys requested so many times. However, absorbed in their yajna, the brahmanas ignored them.

At last, the boys returned to Krsna and Baladeva and told Them, "The brahmanas will not give us any foodstuffs as alms. We told them that in this yajna something can be given to needy persons, and that we are very hungry, but they didn't pay any attention to us."

Krsna told His friends, "Why are you so sad? If a beggar goes anywhere and asks for foodstuffs and those persons don't give, other people in other places will give with honor. Now you can go to the yajna-patnis, the wives of the brahmanas doing "Svaha, svaha." (grains or other items are offered into a sacrificial fire by this mantra, svaha.) These wives have much honor for Me and for Baladeva Prabhu. Go to them and tell them about Us. They will surely give alms.

The cowherd boys returned to the village of the yajna-patnis and told them, "Krsna and Baladeva Prabhu have come nearby here, and They are hungry." The yajna-patnis at once took large vessels full of foodstuffs they had already prepared, and brought them to Krsna.

When they reached the garden decorated by Asoka trees where Krsna was strolling in the company of his cowherd friends, they told Krsna, "We have left our atheistic husbands and come to You. Please accept us. We will be satisfied only if you accept us as the servants of Your servants."

Krsna is a gopa. When so many gopis came to Krsna at the time of rasa-lila, Krsna told them, "Return to your husbands." A big discussion took place, and finally Krsna had to do rasa and dance with them. * How many days did He dance with them? He danced for one full night of Brahma , and He was satisfied. With the brahmanis however, He considered, "They are brahmanis. How can I accept them?"

Krsna told the Yajna-patnis, "Please return to your husbands. They will repent for having not given alms, and they will praise you." Krsna then took all the vessels full of varieties of foods, and the yajna-patnis returned to their homes. 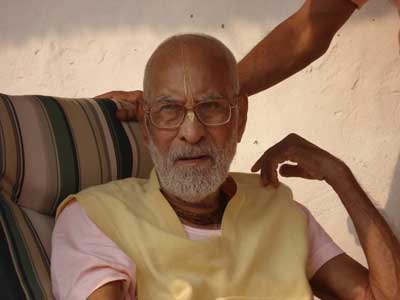 Their husbands had heard about what happened and repented for their offense to Krsna and Baladeva. They began to condemn themselves thus: "Oh, fie on our yajna, on our "Svaha, svaha." Of what use is it?! Our wives cannot read the Vedas and they have no sacred thread, yet their lives are successful. We utter, 'Svaha, svaha', but that 'svaha' cannot take us to Goloka Vrndavana."

Why did Krsna accept the gopis and not the yajna-patni brahmanis? It is for the very reason that they were brahmanis. A gopa, a member of the vaisya or cowherd dynasty, has so much regard for brahmanas.

Before they left His company He told them, "Everything you desire will be fulfilled." It may be that they would become gopis in their next birth, and then Krsna would accept them in His company forever. [This pastime can be found in Srimad-Bhagavatam, Chapter 23]

Krsna was thinking, "The hands of our forefather, the moon, are smeared with kumkum. Those hands, his rays, are decorating the face of his beloved Purva-disa without any difficulty, and she is shyly accepting that reddish ornamentation. Why should I not do the same?"

In other words, the reddish rays of the moon radiated through-out the forest, bathing the trees and the rivers and everything else in it in a red light.

In that ambrosial atmosphere, thoughts of the gopis came to Krsna's mind, and He remembered His promise to fulfill their innermost desires. He pondered, "By diffusing the reddish hue of his gentle rays and by glowing with the effulgence of newly applied vermilion, Candra (the moon) has reminded Me of My promise and has placed within My heart the inspiration to fulfill it. This is the perfect moment for Me to do so."

Then, on that full moon night of the autumn season, He played a beautiful melody on His flute and the gopis came running to Him. But when they arrived, He told them to return to Vraja. "A lady should serve her husband," He said, "regardless of his qualities. Her husband may be poor or plagued with diseases, but she should serve him under all circumstances."

At first the gopis did not say anything in reply, but within their minds and hearts they questioned, "Does He really mean it or is He joking with us?" They observed Him closely as He tried to cleverly hide His real intention. It seemed that He was honestly expressing Himself in a straightforward manner, but in fact, He was not.

Finally, the gopis said, "You are our guru and, as such, You are giving us so many instructions. We know that even in the presence of God, a person should serve his gurudeva first, so let us first serve You, our gurudeva, before we return to serve our husbands."

As all surrender unto Me, I reward them accordingly. Everyone follows My path in all respects, O son of Prtha.

Sri Krsna was instructing the gopis and also telling them, "I am God, so you should obey Me".

The gopis replied, "We agree that if You are God we should certainly obey You, but our first duty is to serve our gurudeva. When we have executed that order, we will obey Your instructions to serve our husbands.

"Our second consideration is this. We know that God is our father, God is our real husband, and God is everything; so if You are God, then You are both our husband and our guru. In every way, if You do not accept our service You will be guilty of acting against the principles of religion. You are giving us instructions on religious principles, but You should practice this Yourself."

At last, rasa began. Krsna danced with Srimati Radhika in the center of the circle of gopis, and at the same time He danced with each of the gopis comprising the circle. It is not that He expanded into as many manifestations of Himself as there were gopis, because in Vrndavana, all His pastimes are free from the mood of opulence (aisvarya). Rather, He danced so quickly, like a firebrand orbiting in a circle, that it simply looked as if He were constantly and simultaneously dancing with each and every gopi. Had He expanded into many manifestations of Himself, this pastime would have been aisvarya-lila. Instead, He was engaged in human-like pastimes (nara-lila). (Gopi-gita, Introduction)