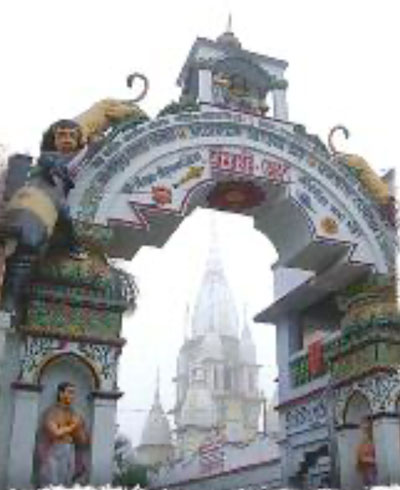 On 30 January 1948, Nathurama Godse shot Mahatma Gandhi at the Delhi prayer assembly. On that very same day, ajata satru pujyapada Sri Narahari Brahmacari Seva-vigraha Prabhu disappeared from this world in Sri Navadvipa-dhama, during the brahma-muhurta hour. At that time, Srila Gurudeva was preaching in the Medinipura area. When he returned to Chunchura on 1 February, he received a telegram from Sri Mahananda Brahmacari with this heartbreaking news, and became stunned like a stone. When his external consciousness returned a short time later, he began to cry, overwhelmed by the piercing separation.

Sri Seva-vigraha Prabhu was one of the foremost disciples and intimate servants of jagad-guru Srila Bhaktisiddhanta Sarasvati Gosvami Prabhupada. Our most worshipful Srila Gurupada-padma had a very close friendship with him; they lived together for a long time and served Sri Dhama Mayapura in countless ways. Srila Prabhupada turned over the entire responsibility for Sri Dhama Mayapura to this dear servant and could then preach suddha-bhakti everywhere with a peaceful mind. [After Srila Prabhupada’s disappearance,] Sri Seva-vigraha Prabhu and Srila Gurudeva left Caitanya Matha together and established Sri Devananda Gaudiya Matha in Sri Dhama Navadvipa. Like Srila Prabhupada, Srila Gurudeva entrusted the whole responsibility of Sri Devananda Gaudiya Matha to Sri Seva-vigraha Prabhu and could thus preach peacefully everywhere.

In the first issue of Sri Gaudiya-patrika, the main magazine of the Samiti, Srila Gurudeva wrote an essay entitled Viraha-mangalya, about Seva-vigraha Prabhu. “The torment I feel by not being able to see Sri Gurupada-padma and Thakura Narahari Seva-vigraha Prabhu, who was devoted solely to serving him, mingles with my pen, causing it to falter at every step and proceed so slowly across the page.

“Srila Prabhupada was very pleased to discover his intimate servitor, pujyapada Sri Narahari Brahmacari Seva-vigraha. He handed over the whole responsibility of his beloved akara-matha-raja, Sri Caitanya Matha, to him and happily went to far distant places to preach pure bhakti with full concentration. … O Narahari Da! Your uninterrupted service to Hari, Guru and Vaisnavas will manifest of its own accord in the memory of anyone who takes your auspicious name. You are the embodiment of Srila Prabhupada’s dear-most Sri Caitanya Matha; when we lived with you, we all thought that we were living in the Caitanya Matha. You have performed the ideal service in a way that is supremely blissful and free from anger. This is the sole aim and objective of Sri Gaudiya Vedanta Samiti.”

Srila Narahari Seva-vigraha Prabhu appeared in the famous Vasu dynasty of the village of Deyada in the Yasohara district of East Bengal. In his early life he and his family were initiated with the sakti-mantra, but he and the majority of his family members were later influenced by Vaisnava association and were initiated into the krsna-mantra, and all began to perform sadhana-bhajana. When his elder brother left this world, Sri Narahari renounced his family and this material world, and took shelter at the lotus feet of jagad-guru om visnupada Sri Srimad Bhaktisiddhanta Sarasvati Prabhupada. Srila Prabhupada was pleased with Sri Narahari’s versatile abilities and service mentality, and appointed him manager of Sri Caitanya Matha.

Sri Narahari was like a mother in nurturing the young boys who lived in the matha. Every day he would wake them up, feed them and take care of them. Because of this sweet, affectionate behaviour, the matha residents referred to him as ‘the mother of the Gaudiya Matha’. But everyone, young and old, addressed him as ‘Narahari Da’. He was always chanting sri harinama and was totally absorbed in the various services of the matha. No one knew when he slept and when he woke. Sometimes in the deep night, when everyone else was sleeping, he would sit in his secluded bhajana-kuti and chant sri harinama with vipralambha-bhava (feelings of separation from Sri Sri Radha-Krsna). We have heard that he sometimes used to tie his sikha to a wooden handle high on the wall to force himself to stay awake while he chanted harinama. No matha resident ever saw him become angry. Even if someone needed to be chided for some special reason, he would scold them sweetly while smiling with great affection.

The following incident took place when I [the author] was new in the matha. I was young then, and very energetic. In the morning, the local farmers would bring vegetables, milk and other products from their neighbourhoods to the vegetable market on the street just outside the matha. Sri Seva-vigraha Prabhu and Srila Narottamananda Brahmacari went outside on the side of the road and began to bargain for vegetables for the matha. The farmers were an unruly lot, and they quarrelled about everything. One time one of them struck Narottamananda Prabhu on the head, drawing blood. Hearing the tumult, I came out, and when I saw the blood on Prabhuji’s head, I lost all self-control. I took a piece of bamboo from the courtyard of the matha and hit that insolent farmer on his back so hard that the bamboo broke and the farmer fell to the ground. In a moment, hundreds of farmers assembled and began to create an uproar, threatening to attack the matha. However, pujyapada Sriman Seva-vigraha Prabhu calmly and peacefully settled this difficult situation with great expertise. First, he caught me and locked me up in a room in the matha. Then he confronted the crowd alone, and pacified them all.

Seva-vigraha Prabhu had a very affectionate manner. He went to the home of all sorts of people and spoke hari-katha. He took an interest in people’s happiness and distress, and they endured their difficulties because of his sweet words.

[The following is an extract from a 1949 letter of Srila Prabhupada Bhaktivedanta Svami Maharaja. The original letter was in Bengali, and was reprinted, along with this translation, in the summer 2001 edition of Rays of the Harmonist, a magazine published by followers of Srila Narayana Gosvami Maharaja.]

Yesterday I became extremely pleased to receive Srī Gaudiya Patrika, which you sent me. Although the Patrika's of medium size, its presentation is very beautiful and its paper and printing is also good. Very few printing mistakes are seen, and can be considered negligible or almost nil. By this it seems that the supervision of the magazine is very well done. Your comprehensive and extensive preaching efforts always attract my heart.

That you always remember me indicates the greatness of character for which you were celebrated even in your previous asrama before joining the maṭha. But I am so unfortunate that I am unable to render any service to you. Therefore, please forgive my offences and discrepancies out of your magnanimous nature. You amply encouraged me at the time of the first printing of my Back to Godhead magazine. Though engaged in so many activities, you blessed my poor home by placing your foot dust in it.

The articles in Sri Gaudiya Patrika are placed in proper order. You have done excellent work by starting with an article on Srila Baladeva Vidyabhusana. Publishing life-sketches of our previous acaryas, one by one, in the Patrika will be extremely beneficial for our sampradaya.

I saw a proposal that your Patrika will also present articles in other languages besides Bengali. By the order of Srila Prabhupāda, I started Back to Godhead magazine to put forward discussions in the English language.

When you will print articles in your Patrika in English, please bless me by accepting a little service from me. I have written many articles and essays in English, and I can send them at your convenience.