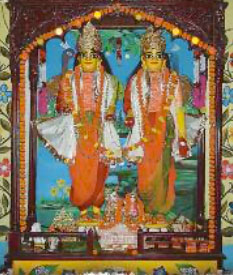 Śrī Koladvīpa’s south-western part, Campaka-haṭṭa, was named after the large garden of campaka flowers that used to be here.

Its present name is Cāṁpā-hāṭī and it is situated in the Vardhamāna district. In Satya-yuga an elderly brāhmaṇa resided here and worshipped Śrī Rādhā-Govinda with these campaka flowers. Pleased with his service, Śrī Śyāmasundara Kṛṣṇa appeared before him as the beautiful Śrī Gaura, whose complexion is resplendent like a campaka flower, and said, “In Kali-yuga I will manifest the form you now see and distribute the chanting of the holy name and love of Kṛṣṇa to the living entities. At that time you will also take birth and witness My most munificent pastimes.” In Mahāprabhu’s pastimes that brāhmaṇa was Dvija Vāṇīnātha, the younger brother of Śrī Gadādhara, who is the personified potency of Śrī Gaura. In Kṛṣṇa’s pastimes Vāṇīnātha was Kāmalekhā Sakhī. The deities of Śrī Gaura-Gadādhara that Vāṇīnātha worshipped are now being served here in Śrī Gaura-Gadādhara Gauḍīya Maṭha, which was established by jagad-guru Śrīla Prabhupāda. 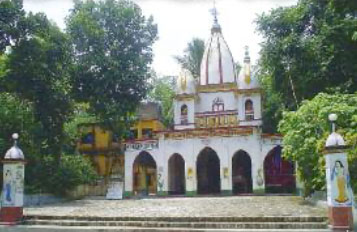 *My beloved, offer the fresh buds of your enchanting feet as an ornament upon my head, so the devastating effect of Cupid’s poison may be alleviated and the harsh fire of amorous desires may also be relieved.*

Śrī Kṛṣṇa left the house and a short time later, Jayadeva returned. Surprised, his wife asked, “How were you able to come back so quickly? Just a short while ago you returned, wrote something in your book, and again went out to take bath.” Jayadeva Gosvāmī asked for his manuscript and upon opening it saw that his unfinished verse was now complete. Filled with wonder, he told his wife, weeping, “O Devī, you are blessed. You had darśana of Śyāmasundara Kṛṣṇa, who personally came here and completed the verse I feared to write. Kṛṣṇa is brought under control by prema, not by devotion based on rules and regulations.”

After some time, Jayadeva Gosvāmī and his wife moved to Jagannātha Purī. Gīta-govinda is so beautifully sweet that even Jagannāthadeva Himself is eager to hear it. Once in a garden, a deva-dāsī [a dancing girl in the Jagannātha Temple] was singing the verses of Gīta-govinda, and Jagannāthajī came out of the temple and swiftly ran towards that garden. As He ran, thorny bushes tore His cloth and scratched His body. When he had heard all the verses He returned to the temple and took His place on the altar. When the pujārī opened the door he was astonished to see Śrī Jagannātha’s condition. The head pujārī and the king were informed and everyone was filled with concern. The next night Śrī Jagannātha appeared to the head pujārī in a dream and revealed to him the secret that He heard verses being sung from Gīta-govinda, and in His haste to go to the source of the sound, His cloth was torn. When Śrī Svarūpa Dāmodara recited Gīta-govinda verses to Śrīman Mahāprabhu, He became immersed in ecstasy.

Śrī Jayadeva received darśana of his beloved Lord in His form as Śrī Gaurāṅga Mahāprabhu.”