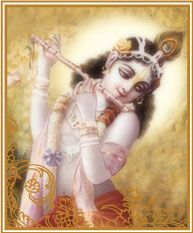 Excerpt from Chapter One of the Book, Krishna: The Butter Thief
By Sri Srimad Bhaktivedanta Narayan Gosvami Maharaja

The Vedic culture of India is steeped in esoteric  knowledge, and has developed to such a degree that the sages in this culture have discovered the soul. They have also discovered God within and without, and through research into the Supreme Personality of Godhead, they have even discovered and realised different relationships with God. We can never imagine or realise transcendental relationships with the Supreme Personality of Godhead through our imperfect material senses and knowledge.  However, the Supreme Lord Sri Krishna Himself transmits transcendental knowledge through an unbroken succession of spiritual masters and disciples. He personally imparted this transcendental knowledge to Brahma (the creator of the material universe). Brahma then gave it to Narada, Narada gave it to Vyasa, and Vyasa gave it to Sukadeva. This processof disciplic succession’ established a body of transcendental knowledge that has descended to us from the perfect source. We should trust this disciplic succession and try our best to follow it.“What is God’s transcendental nature? What can we know of his omnipotence and mercy? What relationship do we have with Him, and how can we realise this relationship and serve Him eternally?“ These topics have been elaborately described and explained in the great scripture Srimad-Bhagavatam, which contains the essence of all Vedic literature. There are twelve cantos in Srimad-Bhagavatam, and its most important instructions are contained in the Tenth Canto.

We must practise bhakti-yoga in order to understand and realise the Absolute Truth. We can not realise anything transcendental otherwise. In order to appreciate what bhakti is, we must first know that the soul and Supersoul exist eternally. Krishna is eternally the one Supersoul, and the innumerable individual souls are also eternal. Two pure souls (that is, the individual soul and theSupreme Soul, Krishna) can only come together through the medium of love and affection. This love and affection is called bhakti-yoga. There are many categories of transcendental love and affection, or prema. The liberated souls serve Krishna eternally in the pure and transcendental realm of Vaikuntha. Within Vaikuntha is Krishna’ s supreme abode, which is called Goloka-Vrndavana. There, he is served with the most perfect moods of transcendental love and affection. Conditioned souls are materially bound, and covered by maya or illusion. They are only qualified to serve bodies, which are made of matter, not spirit. Conditioned souls are always unhappy, because they are suffering in the chain of birth and death. How can they attain the eternal and transcendental stage? They have to practise bhakti-yoga from the beginning stages, and develop progressively and regularly from the stage of faith through steadiness, taste, transcendental attachment, and transcendental ecstasy. This is the way.

THE DESCENT OF THE LORD

It is only through bhakti-yoga that we can realise the Supreme Personality of Godhead. We cannot do so by any other means. The Supreme Lord is so merciful that He sometimes descends in this world to bestow His mercy on the conditioned souls who inhabit it. For instance, the scriptures tell us about the ten primary incarnations. These are: (1) the fish incarnation (Matsya); (2) the gigantic, transcendental tortoise (Kurma); (3) the boar incarnation (Varaha); (4) the terrifying form as half-man and half-lion (Nrsinghadeva); (5) the dwarf incarnation (Vamana); (6) Parasurama, the invincible warrior; (7) Lord Ramacandra, the great king; (8) Baladeva, who is the complete form of all spiritual masters;(9) Buddha; (10) Kalki, who rides a white horse and destroys the miscreants at the end of the Iron Age.

The root and the original cause of all these ten forms is the Supreme Personality of Godhead, Sri Krishna Himself.Krishna descends to this world, not only in these different incarnations, but also in His original form. In this original Krishna form, He attracts everyone. What to speak of human beings, He also attracts the animals, deer, birds, creepers and trees. Krishna attracts all creatures, because He attracts the soul, which is present in the demigods; in the hog and the fish; in eggs, trees and creepers; and even in water particles and dust. The soul is present everywhere. If you practise bhakti-yoga, you can see and realise this fact, and you will gradually develop bhakti, devotion to Krishna. People generally do not appreciate hearing philosophical conclusions alone. For this reason I want to explain these categories of prema by narrating Krishna’s pastimes. This bhakti-yoga will become more attractive if we explain theTenth Canto of Srimad-Bhagavatam - how Krishna descends in this world, how He protects the sadhus and kills the demons, and how He performs His supremely attractive pastimes.

THE BLESSINGS OF HEARING KRISHNA’S PASTIMES

Krishna’s name and Krishna’s pastimes are not mundane things of this mortal world; they are transcendental. Hearing Krishna’s pastimes is not an ordinary activity; it is also transcendental. There is a vast difference between the mortal world and the transcendental world. When we glorify Krishna’s qualities and pastimes, or chant His holy names, the transcendental sound vibration is extremely auspicious. Even if one is covered with ignorance, and his heart is full of unwanted material thoughts and desires, still, if he has a little honour — just a very little — these transcendental vibrations will come through his ears to his heart. These are not words in the common sense; Krishna Himself comes in these transcendental sound vibrations. How? His transcendental world comes into the heart of any person who has a slight fraction of faith (Sraddha).When one realises this, his whole heart becomes clean and pure, and his faith (Sraddha) becomes more condensed. Transcendental devotion (bhakti) comes into his heart, and he becomes a devotee. The devotee takes initiation from Gurudeva, and engages in devotional service. All the unwanted material conceptions and desires flee from his heart, and all his bad habits go away. Then he develops his Krishna consciousness, and fixed and stable practice (nistha),taste (ruci) and transcendental attachment (asakti) follow. After that, his devotion develops to the stage of transcendental ecstasy, and then fully developed transcendental love for Krishna, or prema. At some point, he will give up his material body, mind, false ego, etc., and be situated as pure spirit soul. In a transcendental body, the devotee associates with Krishna as an eternal resident of Vraja, and becomes happy forever.