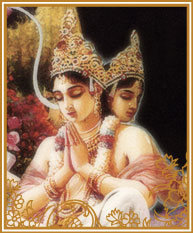 Then the mother of all Vedic hymns, Gayatri (which emanated as the sound of Shri Krishna’s flute), along with the means for receiving and transmitting it, entered the lotus faces of Brahmä through his eight earholes, and Brahma achieved realization of the kama-gayatri mantra. The lotus-born Brahma was thus initiated by the flute-song of Bhagavan Shri Krishna, the original guru, and by that reformation he attained twice-born status.

The sadhaka first becomes trained and purified through the process of becoming twice-born as described in this verse, and afterwards, through mantra-sadhana he attains darshana of the presiding deity of the mantra. For example, Dhruva Maharäja left his home at the age of five years to worship Shri Bhagavan, although he had no knowledge of the procedure for His worship. Bhagavän, who dwells in the hearts of all, sent Devarshi Närada to him, and when Shri Narada clearly saw Dhruva’s firm determination, he bestowed diksha-mantra upon him on the bank of the Yamunä at Mathurä, and told him, “Go to Madhuvana and perform bhajana of Shri Bhagavan there. He will give you His darshana very soon.” As a result of performing severe sadhana in accordance with Närada’s instructions, Dhruva received the Lord’s darshana within six months. As illustrated in this history, the acceptance of diksha is absolutely necessary in order to perform the sadhana and bhajana for realizing Shri Bhagavan.

Brahmaji also became fully accomplished after undergoing the process of purification by becoming twice-born, just as Dhruva did. This process is described by the two shlokas beginning with the words atha venu-ninadasya. It is clearly stated in the second shloka that Gayatri is the mother of the Vedas. Tan-mayi gatih means that the mantra, together with the traditions for receiving, practicing and transmitting it, entered within his lotus faces by way of his eight earholes. In this way Brahma received the reformatory process of initiation by means of gayatri-mantra from the original guru Shri Krishna, and attained the status of a twice-born brahmana.

The nature of the sound of Shri Krishna’s flute is specifically eternity, knowledge and bliss, and therefore all of the Vedas exist in their perfect form within that sound. Gayatri is a Vedic meter, and in brief it can be said to contain a meditation and a prayer. Among all the gayatris, kama-gayatri is the best because, unlike any other gayatri, the prayer and meditation within it are fully imbued with transcendental pleasure-pastimes. The gayatri that is chanted after the eighteen-syllable gopala-mantra is known as kama-gayatri. Within this gäyatri, after a fully complete meditation on Shri Gopijana-vallabha, the transcendental Cupid is invoked by a prayer to attain entrance into His pastimes. Nowhere can one find a more excellent example of rasika poetry concerning the transcendental world, through which the sadhaka can take shelter of the abode of prema. At the moment this very gäyatri entered the ears of Brahmäji, he became qualified as a brähmana and began to sing it. It should be properly understood that whichever fortunate jiva receives this mantra factually attains spiritual rebirth. There are two types of second birth. One is automatically attained by entrance into the transcendental world. The second, which is for those conditioned by gross matter in this illusory material existence, is the acceptance of the reformatory process called second birth according to the customs pertaining to one’s lineage and personal nature. The jiva who attains second birth in the first way is in every way sublime and superexcellent in comparison to the jiva who undergoes second birth by the second process. This is because the purpose of undergoing diksha, enlightenment concerning spiritual topics, is to attain spiritual birth, and the consequent attainment of the transcendental realm is the ultimate glory of the jiva. This is the ultimate benefit, which makes the life of a jiva successful.

Translation
By remembrance of that gayatri-mantra, which is the essence of all the Vedas, Brahmaji became fully enlightened with the ocean of realized truths, and with that essence of Vedic knowledge he offered the following hymn to Shri Krishna, who is known as Keshava.

Following the mood of verse 26, Brahmäji performed aradhana (worship) by means of the käma-gayatri krishna-mantra for a very long time. After that long period, Bhagavan Shri Krishna, who is supremely full of compassion, manifested all the truths and conclusions of the Vedas and other scriptures within the heart of Brahmaji. Then Brahma began to offer prayers that were born from the essence of the Vedas. Whatever else has been said in this shloka is clear.

By remembering the kama-gayatri, Brahmaji achieved some degree of realization that “I am the eternal maidservant of Krishna.” The conception of being a maidservant of Krishna is such a deep and confidential mystery that it was not fully realized by Brahmä, but his ability to distinguish between spirit (cit) and dull matter (acit) was so developed that the ocean of truths such as krishna-tattva, krishna-shakti-tattva, maya-tattva, bhakti-tattva and so on were fully manifest within his heart. All Vedic knowledge was thus revealed to Brahma, and with the essence of the Vedas he offered this prayer known as Shri Brahma-samhitä to Shri Krishna. In this prayer all the conclusions of Vaishnava philosophy are present, as if the ocean were condensed into a waterpot. For this reason, Shri Chaitanya Mahaprabhu taught this to His own devotees, and all intelligent readers should therefore make every endeavor to recite and taste the moods of this Brahma-samhita every day.