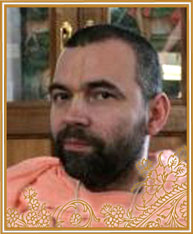 Bhaktivedanta Sadhu Maharaja is a disciple of Sri Srimad Bhaktivedanta Narayana Goswami Maharaja. He was born in Lithuania, Eastern Europe, and got in touch with Krsna consciousness and devotees in 1989. Having been a temple devotee in ISKCON in Vilnius, Lithuania in the early 90's, he was looking for a bona fide guru. Finally, he met Sri Srimad Bhaktivedanta Narayana Goswami Maharaja in Vrindavana in 1999 and got harinama from him. Srila Gurudeva then gave him the name Parjanya dasa. Then, he received diksha initiation in 2000, during Srila Gurudeva's first visit to Russia.

Srila BV Narayana Maharaja at once gave Parjanya dasa an order to preach in his country and print his books in Lithuanian language. During Kartika festival of 2002 in Vrindavana, Srila Gurudeva gave Parjanya dasa saffron cloth (status of a brahmacari). After staying in Rupa Sanatana Gaudiya Math in Vrindavan (winter 2002 - 2003) and Gour Govinda Gaudiya Math in Birmingham (2004), Parjanya dasa Brahmacari started organizing Srila Gurudeva's  sannyasis' tours of Russia and Lithuania and translating Srila Gurudev's and Vaisnavas' harikatha into Russian and Lithuanian languages on regular basis.

On Guru Purnima day of 2009 in Navadwipa Dhama Srila Gurudeva bestowed upon Parjanya dasa the holy order of sannyasa and the name Bhaktivedanta Sadhu Maharaja.