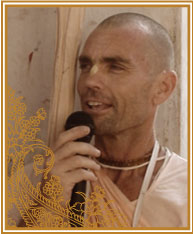 In 1973 I was walking down a long California beach in my beach attire and met some devotees of Sri Krishna who were distributing flyers. One devotee told me, “You are not your body, you are a spirit soul, you can realize this by chanting the Maha-mantra:

This impression stayed with me in a deep way.

The following year while in Hawaii, I met devotees of Sri Krishna once again. I started attending their Bhagavad-gita classes. Finding all my questions about life being answered one after the other, I decided to move onto the island’s Krishna farm community. From there I went to Oahu, Hawaii, where His Divine Grace A.C. Bhaktivedanta Swami Prabhupada was. Upon meeting him, my heart was stolen by his transcendental pure presence and the instructions he was giving in his classes.

In 1975, I recieved harinama-mahamantra (first) initiation and the name Krishna-bhajana dasa. My service was doing harinam sankirtan (congregational chanting) and Back To Godhead magazine distribution on the streets of California.

Srila Prabhupada came to Los Angeles again in 1976 and being in his presence for a whole week, I was very much inspired!  The following year, in February through March time frame, I traveled to Mayapur, West Bengal, India for the full moon festival celebration of the appearance of Sri Caitanya Mahaprabhu. There Srila Prabhupada mercifully granted me and others his daily association for two weeks. Then in end of August 1977, or Lord Balaram’s appearance day, I received diksa (2nd initiation).

I took up various devotinal services for the pleasure of Srila Prabhupada, such as leading sankirtan, assisting new members, coordianting memberships for Friends of Lord Krishna congregation, college preaching, and even temple management as temple president. But somehow, after Srila Prabhupada disappeared from our external vision in 1977, things slowly seemed different. I, as well as others, began to wonder how to stay focused on the goal, love of God, or Krsna prema?

I was thinking, if I don’t have continued association with saints, then how will I continue to do bhajana-kriya and become Krishna Bhajana das?

“The verdict of all revealed scriptures is that by even a moment’s association with a pure devotee, one can attain all success."

One drop goes a long way and Srila Prabhupada heard the cries of his disciples.

Fast forward 20 years, in 1997, in a rugged mountain village in remote area of California, I met the dear friend of Srila Prabhupada, Srila Bhaktivedanta Narayana Gosvami Maharaja. He became my siksa-guru and later my sannyasa-guru. He also stole my heart and put it in his pocket. He deeply refined and inspired the devotional practices of all the devotees. At that time, I started following him around the globe on his pure bhakti world tours. Twenty-four times we circled together. At every stop there was so much mercy.

In 2003 he gave me initiation into the sannyasa (renounced) ashram. He ordered me to continue traveling around the globe and preach and help devotees, especially in the Latin American countries as I can also speak Spanish.

In Badger, June 2008, he said, “When we compare vapu (physical presence), and vāṇī (instructional vibration), vāṇī is better. It is better to serve. The disciple must follow gurudeva’s instructions. However, if vāṇī is with vapu, then vapu is so exalted.”

I am eternally indebted to both my spiritual masters and pray for their continued mercy upon me.