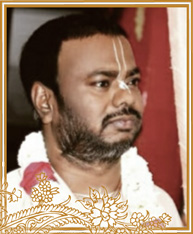 Haridwar, India
+91-89108-59167
Email: This email address is being protected from spambots. You need JavaScript enabled to view it.

Sripad Bhaktivedanta Vishnu Maharaja left home at an early age and joined Devananda Gaudiya Matha in Navadvipa. He received initiation from His Divine Grace Srila Bhaktivedanta Vaman Goswami Maharaja on Gaura Purnima in March 1992. He served in Navadvipa for several years before being sent to Mathura to serve under the guidance of Srila Gurudeva (His Divine Grace Srila Bhaktivedanta Narayana Goswami Maharaja). During this time, he deeply studied all the Gaudiya Vaishnava scriptures. He also attended the Sanskrit school in Vrindavan

In 2008, Srila Gurudeva sent him to Haridwar to serve at the newly opened Sri Radha Madhav Gaudiya Matha (Madhvi Kunj). He has been sincerely serving in Haridwar since then and by his sincere efforts hundreds have embraced the path of devotion to Sri Radha Krsna. In February 2019, he accepted Sannyasa, the renounced order of life.