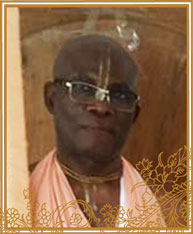 Sripad BV Shanta Maharaja met the Sripad Brahamanda Maharaja (Iskcon) and the devotees in 1979 in Lagos, Nigeria. He served with  Iskcon mission in West Africa until 1985, distributing books, opening temples, and preaching the mission of Sri Caitanya Maharapbhu. Next he continued to serve in Southern Africa until 1988. At that time he came to the USA and after a short time went to Belize (Caribbean) to open a temple there. He returned to the USA and started preaching with Sripad Bhakti Tirtha Maharaja and Sriman Mukunda Prabhu. He met Srila Gurudeva, Srila Bhaktivedanta Narayana Gosvami,  in the suburbs of Washington, DC, in 1997 and took initiation shortly afterwards. In 2009 Srila Gurudeva awarded him vanaprastha. In 2016 he was awarded the order of Sannyasa by the mercy of Srila Bhakti Vijnana Bharati Goswami Maharaja.

Currently he spends most of his time traveling in the U.S.A. and travels to preach in Africa when the opportunity arises.