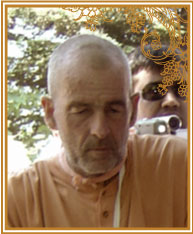 Sripad Avadhuta Maharaja was born in a traditonal American family in 1946. Not being very interested in the materialitic education he was receiving, he began transcendental meditation in 1968 which led him eventually to meet devotees of Sri Krishna and his spritual master A.C. Bhaktivedanta Swami Maharaja Prabhupada in 1969 in San Francisco. Shortly after he received harinama-mahamatra and the name Upananda das.

Then in 1970, he joined and served in the the first Australian temple in Sydney. Leaving Australia in 1981, he preached in West Africa for 9 years. Upon return to USA in 1990, he met and was inspired by Srila Gour Govinda Swami in San Diego. There in 1993 he began Govinda’s Bliss Bars production with partner Sripad Sadananda das.

In 1997 he met and received inspiration from Srila Bhaktivedanta Narayana Maharaja, becoming a siksha disciple. In 2004, Sripad Avadhuta Maharaja received the sannyasa order from him. Since then he travled here and there and everywhere just like an avadhuta (mendicant) with a bead bag in his hand. Now he is based, more or less, in Texas at the New Gokul Farm Community.