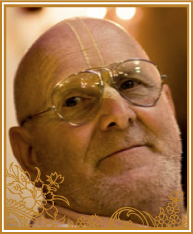 Bhagavat Maharaja holds degrees from the Florida Vedic College in Bhakti Yoga (the Yoga of Love and Devotion), Ayurveda (Vedic Naturopathic Healing), and Jyotish (Vedic Astrology).  He is well versed in, and has lectured around the world on, the esoteric teachings of the Srimad Bhagavatam, Bhagavad-Gita, and numerous other sacred Vedic texts.  In 2008, Bhagavat Maharaja accepted the formal order of Sannyasa from His Divine Grace Bhakti Vedanta Narayana Goswami Maharaja, head of the International Pure Bhakti Yoga Society, and was conferred with the title of Swami. Following the ageless traditions of the Vedas, he has accepted a vow of detachment from material life and fully dedicated himself to compassionately uplifting the bleak condition of human society. Sripad Bhagavat Maharaja is currently on a world preaching tour under the guidance of Srila Bhaktivedanta Narayana Gosvami Maharaja.  Bhagavat Maharaja is an acclaimed speaker and has been praised for his unique ability to weave the complex philosophical truths of the Vedas with simple modern examples, thus creating an easily accessible and comprehensible subject matter for listeners of all backgrounds and experiences.

As an ordained Vaishnava priest, Bhagavat Maharaja educates others on the theory and practice of Bhakti Yoga and provides spiritual counseling.  If you would like to invite Bhagavat Maharaja to speak to your group or organization, please contact him at:

Thank you very much.  Hare Krsna.