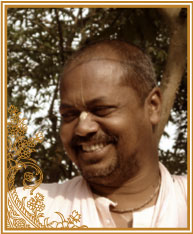 At the beginning of creation Goloka-vihārī Bhagavān Śrī Kṛṣṇa bestowed upon Lord Brahmā the supremely pure Vedic siddhānta of the Bhāgavat. Brahmajī gave that message of God – eternal, supremely pure siddhānta – to his sons and grandsons, the ṛṣis headed by Nārada. Gradually in the course of time, dissimilarity in conceptions and thoughts arose within humankind due to differences in nature and conduct, eating and drinking, and various ways of life. Thus, from the great river of the eternal, supremely pure current of thought, there emanated many small streams in the form of the various branches of dharma. Among those many streams, however, the Śrī Brahma-Madhva-Gauḍīya- Rūpanuga-Vaiṣṇava paramparā alone is able to make that supremely pure, eternal current flow throughout the world. This paramparā sprinkled the entire world with the nectar of the perfectly pure current of bhakti-rasa and also bestowed upon the world the nectar of the highest prema. In recent times, śrī rūpānuga Gauḍīya Vaiṣṇava ācārya, oṁ viṣṇupāda aṣṭottara-śata Śrī Śrīmad Bhaktivedānta Nārāyaṇa Gosvāmī Mahārāja is the foremost ācārya in this particular paramparā.

Along with the development of material science, the human race becomes more and more materialistic, and engulfed by voidism, non-dualism, secularism and hedonism. Thus mankind becomes cast into a deep, perpetually dark hole – the prison of material existence – where it is gripped by snakes, scorpions and lions, the malicious creatures of lust, anger, greed, infatuation, intoxication and envy. During such a dark time, the confidential maidservant of Śrī Vṛṣabhānu-nandinī Rādhājī, Śrīla Bhaktivedānta Nārāyaṇa Gosvāmī Mahārāja, descended in a Tivārī brāhmaṇa family in the village of Tivārīpura located in the Buxar district of Bihar.

Śrīla Mahārāja became fully adept in all aspects of knowledge and tradition, and from childhood, he remained immersed in the current of bhakti for Śrī Rāma and Śrī Kṛṣṇa. To tend to his responsibility for his worldly family, he entered government service, but he was unable to absorb his mind, spirit and words in his occupation. This is because the internal current of nitya-siddha bhakti, present in the depth of the ocean of his heart, was as if obstructed. This current of nitya-siddha bhakti hidden within the heart of Śrīla Mahārāja, in the form of unnata-ujjvala bhakti-rasa (that rasa that was tasted by the embodiment of vipralambha-rasa, rasarāja-mahābhāva-svarūpa Śrī Śacīnandana Gaurahari), was surfaced by the moonshine of good fortune – the boundless mercy of śrī gurupāda-padma. Although unaware of this, he was naturally attracted to the current of thought that was within the heart of his gurupāda-padma Śrīla Bhakti Prajñāna Keśava Gosvāmī Mahārāja, and he thus entered the āśrama of his guru. He uttered from his own lotus lips the words, “emana durmati, saṁsāra-bhitare, paḍiyā āchinu āmi tava nija-jana, kona mahājane, pāṭhāiyā dile tumi – O Lord, I am so foolish and evil minded that I have fallen into this material existence, but out of your extreme compassion you have sent one of Your own associates, an exalted devotee, to deliver me.” In this way he took shelter of the teachings of śrī guru and Gaura and dedicated his entire life to the service of śrī guru. He thus accepted the deeply significant and weighty responsibility of propagating the teachings of Śrī Rūpa-Raghunātha, not only in India, but throughout the entire world.

Many religionists and learned scholars have preached in the West, but some have taught the incorrect path, some have propagated their own self-concocted paths, some succumbed to material wantonness, and many have swayed from the subtle current of bhakti and become distracted by profit, worship and prestige or simply blinded by greed for wealth. Yet we saw in the ideal life of Śrīla Bhaktivedānta Nārāyaṇa Gosvāmī Mahārāja, that he followed the strict rules of Vaiṣṇava conduct, maintained a life of full vairāgya, remained aloof from attachment to material sense objects, displayed exclusive dedication complete indifference to all else, and was endowed with intense hankering for the great prema-anurāga of Śrī Śrī Rādhā-Kṛṣṇa. Thus, as an exalted devotee, he was adorned with every symptom of the elevated state of bhāva (bhāva-siddha-bhakta). By his own life’s example, he displayed the astonishing nature of rūpānugā-bhakti before all the inhabitants of the world.

In the dry, desert-like hearts of the jīvas, he sowed the seeds of bhakti-rasa. Nurturing the bhakti creeper, he revealed the importance and dignity of attaining the position of a kiṅkarī of Śrīmatī Rādhārāṇī. Such a stage is extremely difficult to attain for the inhabitants of this world, and it is rarely described even in the Vedas and Āgamas. Most of the Vaiṣṇavas in the line of Śrīla Bhaktisiddhānta Sarasvatī Prabhupāda are completely engaged in establishing Vaiṣṇava siddhānta by defeating the arguments of other schools of thought, yet Śrīla Mahārāja revealed the dormant secrets of bhajana of his guru-varga and thus revealed the novel speciality of the paramparā.

During the British rule in India, the world of religion was enveloped in a period of darkness. At that time, there were so many apa-sampradāyas, the heterodox schools of Vaiṣṇava thought such as sahajiyā, sakhī-bhekī, smārta, atibāḍī, cūḍādhārī, aula, bāula, karttābhāja, etc. It was then that Śrī Saccidānanda Bhaktivinoda Ṭhākura descended to this world and reinitiated the nectareous current of bhakti in the line of Śrī Caitanya Mahāprabhu. He illuminated gaura- kāma, gaura-dhāma, gaura-nāma – Gaura’s holy desire, Gaura’s holy abode and Gaura’s holy name. He gathered the essence of all the writings of the Gosvāmīs, which express the mood and sentiments of Śrīman Mahāprabhu, and based on this, he composed over one hundred books in very lucid and easy to understand language.

Just as Bhāgīratha Muni initiated the flow of the Gaṅgā, Śrīla Bhaktivinoda Ṭhākura initiated the flow of the Bhakti-Gaṅgā throughout the entire world. He predicted that hundreds of thousands of fair-complexioned devotees would join the current of Śrī Caitanya Mahāprabhu’s harināma-saṅkīrtana movement, and that they would all become affluent with the wealth of love for Śrī Śrī Rādhā- Kṛṣṇa. It is written, “sarasvatī kṛṣṇa-priyā, kṛṣṇa bhakti-tāra hiyā, vinodera seī se vaibhava – Sarasvatī, or transcendental knowledge personified, is the beloved of Krsna, because her heart is the abode of kṛṣṇa-bhakti. That Sarasvatī is the extended opulence of Bhaktivinoda”. In other words, Śrīla Bhaktivinoda Ṭhākura manifested Vimalā-prasāda Śrīla Bhaktisiddhānta Sarasvatī.

Jagad-guru Prabhupāda Śrīla Bhaktisiddhānta Sarasvatī took a vow that for the duration of his life, he would deliver this bhakti-rasa to the doorstep of all jīvas. He stated, “Birth after birth we aim to become the dust at the lotus feet of Śrīla Rūpa Gosvāmī (who is Śrī Rūpa Mañjarī). This is the sole and highest aspiration of our lives and our only desirable object.” And among the associates of Śrīla Prabhupāda, Śrīla Bhakti Prajñāna Keśava Gosvāmī Mahārāja, with great influence and intense austerity, dedicated his entire life to the service of śrī gurupāda-padma, keeping the lamp of Bhaktisiddhānta ignited. In this way he gave light to the entire world. He reinitiated Śrī Dhāma parikramā, large-scale preaching, and the publication of books, thus preventing the line of Bhaktivinoda from becoming blocked. By doing so, he was successful in bringing kṛṣṇa- bhakti-rasa to the hearts of the jīvas.

Thus, bathing in the current of Śrī Bhaktivinoda, in the waters of the bhakti-siddhānta of Śrīla Bhaktisiddhānta Sarasvatī, in the stream of Śrī Keśava (Bhakti Prajñāna), in the Gaṅgā coming from the feet of Śrī Vāmanadeva [Śrī Śrīmad Bhaktivedānta Vāmana Gosvāmī Mahārāja], Śrīla Bhaktivedānta Nārāyaṇa Gosvāmī Mahārāja brought that same water – bhakti-rasa – to the entire world and cooled the dry, lifeless and almost scorched hearts of the living entities. He extinguished the great forest fire of improper desires, misconceptions and ill logic, burning in the hearts of the jīvas throughout the world, and he sprinkled upon them the nectar of the teachings of Śrī Rūpa-Raghunātha. He upheld the rūpānuga-vicāra-dhārā and showered upon the hearts of the jīvas the deep, hidden secrets of the nectar of the Śrīmad-Bhāgavatam and Śrī Caitanya-caritāmṛta.

Some individuals, although performing exclusive bhakti to Śrī Caitanya Mahāprabhu, had confined themselves to the path of worship in awe and reverence – the mood of Dvārakā, or the path of rules and regulations. But being on a higher platform, he always inspired others to become endowed with greed for vraja-bhakti, to have enthusiasm for anurāga and to obtain real sambandha by following in the footsteps of the Vrajavāsīs. Even among those who aspire for the amorous mood (madhura-bhāva), some had become confined to kāmānugā-bhakti. But he was on a higher platform than that, also, and manifested tat-tat-bhāvecchāmayī- bhakti, in which the desire for separate personal happiness is completely abolished. And he generated within others the aspiration to become the kiṅkarī of Śrīmatī Rādhārāṇī, by following their (the kiṅkarīs’) footsteps.

Our entire rūpānuga guru-varga carry these moods and sentiments. Since he had embraced these moods within his heart, he exhibited the ideal for performing bhajana under the guidance of śrī guru, and he gifted that ideal to the whole world. To such a guru, I offer my praṇāma.

Gurudeva! Today, the earth has become devoid of all beauty (śrī). The brilliant smiles on everyones’ faces have been stolen away, and all are becoming dishevelled due to being cast into the mood of deep separation. You were able to edit and proofread your commentaries on the Tenth Canto of Śrīmad-Bhāgavatam up until the description of vraja-līlā along with the māthura-viraha-līlā. At that point, you became drowned in vipralambha-bhāva and told us, “I am unable to continue any further, because of poor health. I am extremely satisfied with this work on Śrīmad- Bhāgavatam and I want to see it published before I leave this world.” 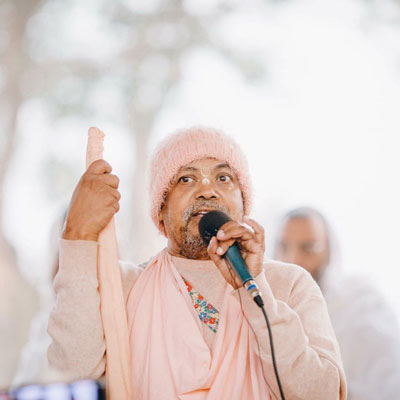 When the first part of the Śrīmad-Bhāgavatam’s Tenth Canto commentaries was published and presented to you during the month of Kārtika in Govardhana, you showered your blessings upon us with the order that this work is to be completed in full, along with the publication of other books. In Govardhana, you gave all the devotees your divine darśana for the last time and bade us farewell. Speaking over the microphone you directed us to continue to attend Śrī Vraja-maṇḍala parikramā and Śrī Navadvīpa parikramā. You told, “With great enthusiasm, the message of Śrī Rūpa-Raghunātha and Śrī Caitanya Mahāprabhu should be preached throughout the world. Working together, my mission should flourish. You need only remain on the path I showed and I will take you with me and deliver you.” Even in your last days, your enthusiasm, effort and inner strength never broke. As a truly gallant personality, you made your departure in great glory, chanting the names of Śrī Kṛṣṇa.

O personified deity of the Śrīmad-Bhāgavatam! O most brilliant example of bhakta-bhāgavata! Today you have entered into the direct service of Bhagavān and, as Their dear associate, you eternally and blissfully serve Śrī Śrī Rādhā-Govinda. May you kindly accept this tear-filled offering of this lowly, fallen and most unfortunate person at your lotus feet.