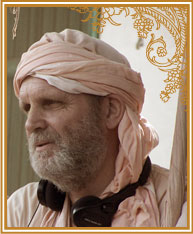 Sripad Bhaktivedanta Tridandi Swami was born in 1949 to English parents in Canada. He first came in touch with the Vedic teachings in 1975. In 1979 he became a full time practitioner of Bhakti yoga, joining a farming community of devotees in Murwillumbah, Australia.

In 1991 he moved with his wife and son to take up residence in Vrindavana, India. That same year he met and began his relationship with his spiritual master Srila Bhaktivedanta Narayana Maharaja. While remaining in India he helped to publish various commentaries of his Gurudeva such as Bhagavad Gita and Jaiva Dharma.

In 2005 he was awarded the renounced order of sannyasa and has continued to circle the globe a number of times teaching and discoursing on the glories of chanting the Hare Krishna Maha mantra.

Maharaja is presently residing in Godruma, where he’s staying since June 2017, absorbing his time and energy in various services for his Gurudeva.