After graduating from Music and Art High School in 1964, Syamarani dasi became a student at New York City College, majoring in art and history. In 1966, at the age of 19, she met her spiritual master. .

Her spiritual master is His Divine Grace A.C. Bhaktivedanta Swami Prabhupada, the founder-acarya of ISKCON, and world-famous preacher of Krsna Consciousness and Vedic culture, and the saintly spiritual master of millions of spiritual seekers. Soon after meeting him, she was initiated and given the name Jadurani dasi. (Later on, in 1992, he inspired his spiritual successor, Srila Narayana Maharaja, to give her the additional spiritual name of Syamarani dasi, and she became one of his first few disciples.)

Srila Prabhupada taught her the philosophy of Krsna consciousness, also known as Sanatana-dharma and bhakti-yoga – the timeless ancient wisdom of spiritual India. Even when she was still new to Prabhupada and Krsna Consciousness he sent her to various yoga groups, schools and universities, including Harvard University. There she represented her spiritual master’s words in the mission to spread the science of God. 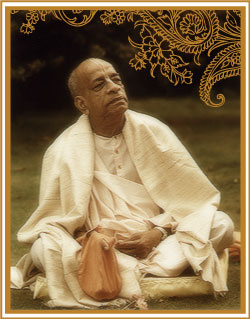 His Divine Grace A.C. Bhaktivedanta Swami PrabhupadaSince 1966 she has painted over 200 paintings for Srila Prabhupada’s temples and books. First he instructed her to make paintings for all of his temples – particularly of Sri Radha-Krsna, Panca-Tattva, himself and the disciplic succession, Visnu in the Causal Ocean, Radha-Krsna and the 8 gopis. After that, under his careful guidance she painted for his translations and commentaries of timeless Vedic literatures such as the Bhagavad-gita and Srimad Bhagavatam.

As early as 1966, Srila Prabhupada invited her to paint in his quarters, and she was therefore able to get many personal instructions from him on how to paint the spiritual world. She says that the glory of those paintings is that they were not a product of the artist’s imagination. Rather, it is that every detail came from scripture and her two self-realized gurus, Srila Prabhupada and Srila Narayana Maharaja. She considers herself to only be a paintbrush, so to speak, for the paintings are manifested from her two gurus through the medium of her hands.

It is widely accepted that Srila Prabhupada’s most significant contribution to the world is his books, which are the authorized translations of the Vedic literatures. He would often describe his work of translating and explaining the ancient Vedic texts as the very life and soul of his mission. He once said, "The paintings are the ‘life department’, and the publication of books is the soul department." He sometimes requested Syamarani to choose the scenes or philosophical conclusions that would be most essential to paint, and also to write the captions for those paintings.

His books are highly respected by the academic community for their authority, depth and clarity. His books are studied by Sanskrit scholars and religionists from all religions, and are also used as standard textbooks in numerous college courses. His books, such as Bhagavad-gita, Srimad-Bhagavatam and Caitanya-caritamrta – filled with the beautiful and colorful paintings of Syamarani and her associates – have been translated into over 50 languages and distributed by the tens of millions all over the world. And now, after so many years, his books are still transforming the lives of aspiring spiritualists.

Syamarani was also requested by Srila Prabhupada to put her paintings in his Back to Godhead Magazine publications, which were distributed by the hundreds of millions around the world in various languages. He wrote in a letter to one of his disciples in 1969: "I am very much encouraged to learn that Jadurani is painting very nice pictures, and all of them can be utilized one after another to come out on the front page of Back to Godhead."

In 1967 Srila Prabhupada made her the first art director in his ISKCON institution and said, "I have taught her how to paint – by chanting 'Hare Krsna Hare Krsna Krsna Krsna Hare Hare, Hare Rama Hare Rama Rama Rama Hare Hare.’" He also said, "In the beginning she could not paint, but by following the process of sravanam kirtanam visnu (hearing and chanting the glories of Lord Sri Krsna) the talent has come out." He once announced to his disciples, "These paintings are windows to the spiritual world. They will be like the rain after the drought of mundane art, and everyone will be attracted."

Under Srila Prabhpada’s careful guidance, Syamarani became one of the first teachers of the Krsna Consciousness movement in the West. At present she is honored as a speaker of Vedic philosophy throughout the world, in countries like the U.S., Canada, England, Germany, Hong Kong, China, France, Italy, Malaysia, Australia, Brazil and Costa-Rica. She is regularly invited to speak in temples, yoga and other spiritual institutions, and on radio and television stations. The most recent radio and television engagements were in Bosnia and Italy this year. In Italy she was on a television show which had over 20,000 viewers. There she spoke about Lord Krsna’s message in the Bhagavad-gita, and also showed the giclees of her paintings. At the end of the television show in Italy, the director of the broadcasting station came over and said, "I just want to dive into these paintings and be there, where they are."

In November 1977, when Srila Prabhupada departed from the vision of the world. In 1992 Syamarani met his spiritual successor, most intimate friend and siksa-disciple, Srila Bhaktivedanta Narayana Maharaja. Just before his divine departure, Srila Prabhupada had requested Srila Narayana Maharaja to continue his mission. For the period spanning over two decades since Prabhupada’s departure, Srila Narayana Maharaja has been unwaveringly carrying out this final request. He has been providing insightful guidance and loving shelter to all who come to him, and through the medium of his English books, and his own classes and personal interviews, he is now giving his purifying association and divine realizations to sincere searchers of truth all over the globe. 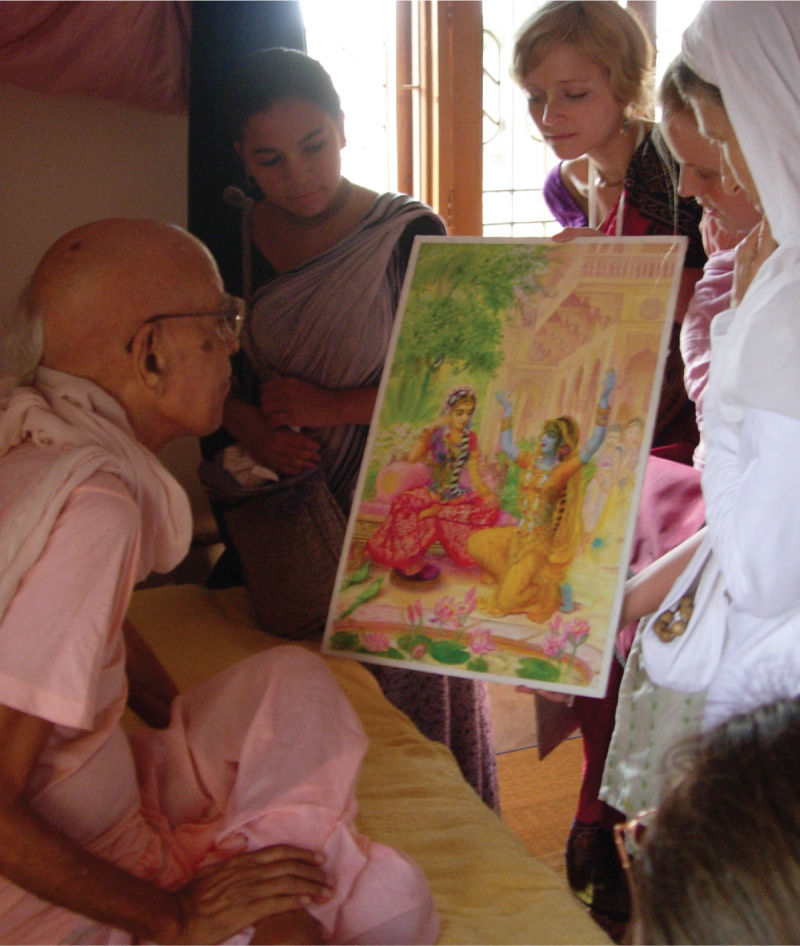 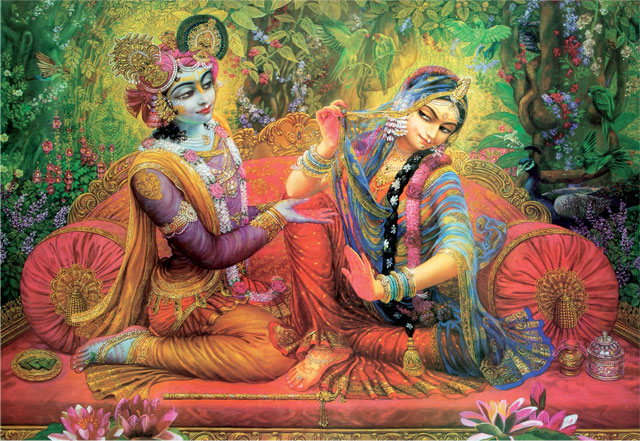 Regarding the style of painting Syamarani employs, she combines the styles of both India and the West. Regarding the Western styles, she was particularly inspired by Renascence painters such as Rafael, and also by the later famous Waterhouse School of art. She was also inspired by Indian styles, especially those depicted by the Brijbasi Company, by the artist Banarji, and even by some of the more stylized and primitive Kangra paintings. From the Indian paintings she receives inspiration regarding the authenticity of the dress, ornaments, architecture, scenery and beauty of the faces and other bodily features. From the Western artists she is inspired by their realism, dramatic lighting, facial emotions and so on. In 1980 she took a course at The Institute of Art in Colorado. While there she learned about the seven elements and eleven principles of design, and how the previous masters used them to impart their message. She also gets inspiration from that study. 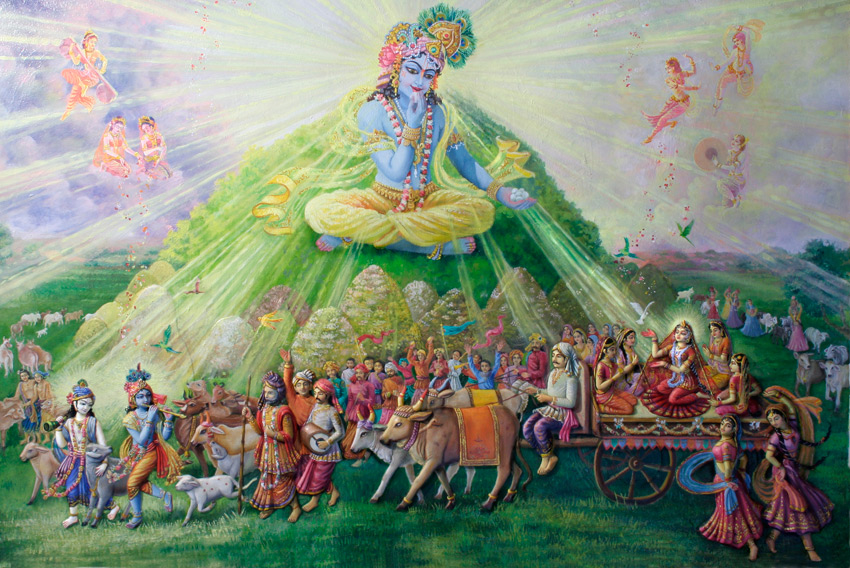 Regarding Syamarani's art medium, from 1966 until 2000 she was using regular Windsor and Newton and other brands of oil paints, and due to health reasons she later switched to water-based oils. She paints on canvas and canvas board. She used regular oils in her paintings that were used for Srila Narayana Maharaja’s translations and commentaries of Vedic literatures such as Bhagavad-Gita, Venu Gita and Siksastakam; and water based oils for his translations and commentary of Sri Jayadeva Gosvami's Gita-govinda.

Most of these books have been further translated into various languages and distributed widely throughout the world. Syamarani travels around the world twice yearly to serve Srila Narayana Maharaja in his preaching work, and sometimes she travels separately to various countries to give classes when required. Sometimes she also paints and draws while traveling, when a book is waiting to be published, and she is usually in the midst of editing Srila Narayana Maharaja’s lectures for publication in off-hours. When she is not traveling, she resides in Vrndavana, India, where she paints and is one of the publishers of Srila Narayana Maharaja’s books.

Publishing Update
In the meantime, she is respectfully submitting to you the almost final version. It has all the information the final book will have, but it has some typos here and there. Please excuse her for whatever mistakes are there. In this way you can start reading it now if you like by clicking the link below.

The Art of Spiritual Life 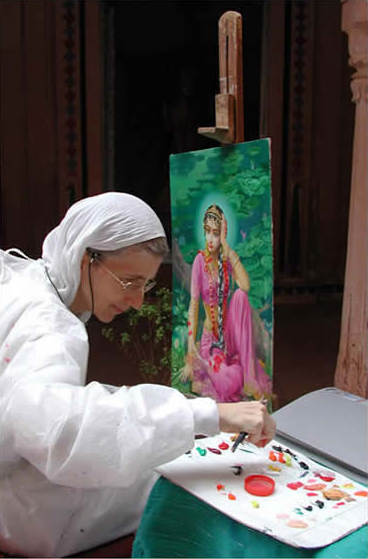