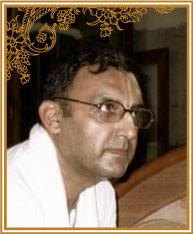 OCF pocket, Block B-3, Near Musical Fountian Park
Janakpuri, New Delhi , India
+91 11 2553-3568
Email: This email address is being protected from spambots. You need JavaScript enabled to view it.

Sri Ramchandra das is one of the senior disciples of  Srila Bhaktivedanta Narayana Gosvami Maharaja. He has been serving from the core of his heart, listening attentively and learning high class of rasik vaisnava philosophy from Srila Gurudeva since 1987.

He has passed degree of Master of Science in Physics in 1974. His household name is Raj Kamal Julka . Though he was born in Delhi in 1954,  his parents shifted to Mathura when he was 3 years old only. In Mathura his residence was quite near to birth place of Lord Krishna, hence mostly every evening he used to spend at Krishna Janmabhumi.  Since his childhood he was interested in spiritual philosophy. As a seeker of absolute truth he has read many philosophies and attended much different schools of thought. Finally his search stopped at Caitanya Mahaprabhu's Gaudiya Vaisnava philosophy and he fully surrendered at the lotus feet of most renowned, realized, elevated perfect, rasik shiromani Srila Bhaktivedanta Narayana Gosvami Maharaja. Because of his very close and intimate relationship with Srila Gurudeva he swiftly understood the deep meaning of Gaudiya Vedanta philosophy. Therefore Srila Gurudeva firstly engaged him translating his classes in English for western devotees and then latter on since 1998 he sent him abroad to USA, UK and Canada for preaching and giving lectures on Vaisnava philosophy and Indian religion. Because of his scientific background he could analytically and in simpler way present the philosophy to the masses. In 1999 Srila Gurudeva established one new society in Delhi, International Goudiya Vedanta Trust,  and appointed prabhu Ramchandra das as its secretary. Then By the mercy of Srila Gurudeva and tireless efforts Ramchandra das this society was allotted a land in Janakpuri New Delhi where in a grand temple, Sri Ramanvihari Goudiya Matha,  has come manifest as one of the most beautiful and prominent maths of Srila Gurudeva . For the convenience of foreign devotees a comfortable guest house and a continental kitchen is also functioning in this matha. Sri Sri Radha Ramanvihariji are most  beautiful deities manifested by Srila Gurudeva and are the main centre of attraction of this Matha.

Because of heavy load of seva given by Srila Gurudeva to Ramchandra das, he took retirement from his Government job of an Insurance company in 2001 and started serving the institution of Srila Gurudeva fully. Now he is preaching in whole world and also serving this institution. Very recently, Srila Gurudeva inspired his different societies like Bhakti project, etc and senior disciples to form one compact and integrated international society to translate Srila Gurudeva's desire and mission into action. Such a new society name Bhakti Yoga Society has been approved by Srila Gurudeva and prabhu Ramchandra das has been elected one of its executive members.