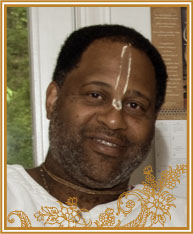 Mukunda Das began attending the Brooklyn ISKCON temple in 1972 and maintained an interest in the study of Bhakti Yoga that led him to join the ISKCON ashram in Los Angels in 1975 during a break from college. After returning to college and spending time as a professional musician, Mukunda Das returned to service in the ashram full time in 1979 and was sent to start temples in Africa where he preached until 1987. After returning to the U.S., he helped to start an outreach preaching center called the Institute for Applied Spiritual Technology which had great success. The single most important event for Mukunda das was meeting Srila Bhaktivedanta Narayana Gosvami Maharaja  in 1996 after having heard and read his books.  In 1997, Mukunda Das took initiation from Srila Gurudev and began to help in the development of Washington D.C. preaching. After retiring from working as a police officer, Mukunda Das moved to Alachua, Florida where he is helping with various projects and preaching.  Having received an order from Srila Gurudev, Mukunda das is also traveling and preaching.