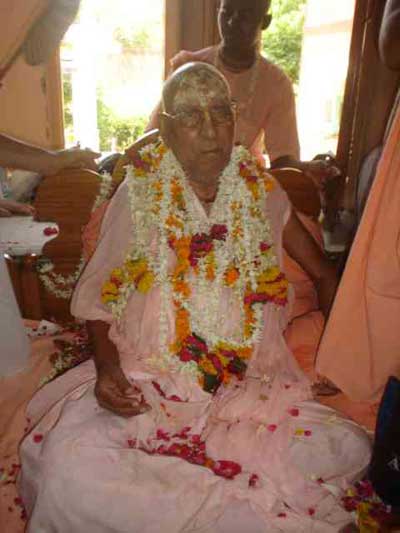 July 5th was Sri Vyasa-puja, or Vyasa-purnima, the appearance day anniversary of Srila Vyasadeva, the literary incarnation of Lord Sri Krsna. On that auspicious day, Srila Bhaktivedanta Narayana Gosvami Maharaja gave a class in Kesavaji Gaudiya Matha in Mathura, where he spoke about the meaning of Vyasa-puja. He explained that in a circle, the line that goes across to the other side, through the central point, is called the ‘vyasa’ which means diameter. A person who can bring the spiritual world (the central point, Radha-Krsna in Goloka Vrndavana) to all the material worlds, like a diameter in a circle, is called “Vyasa” and can be worshiped as a representative of Srila Vyasadeva.

On July 6th, Srila Maharaja very mercifully showered his divine grace to thousands of visitors who came to take his darsana in Sri Kesavaji Gaudiya Matha. Tens of thousands of people were in line, waiting for his appearance in the morning. At 7:00am he entered the temple room and personally performed the arati of his divine master, Sri Srimad Bhakti Prajnana Kesava Maharaja, to Srila Bhaktisiddhanta Sarasvati Thakura, and to the entire guru-parampara. He placed garlands on all the photos of the guru parampara, and then proceeded to garland the maha-bhagavata acaryas of the four prominent Vaisnava sampradayas: Sri Ramanuja, Sri Visnusvami, Sri Nimbaditya, and Sri Madhvacharya.

From 7:00 am until almost midday, Srila Maharaja was sitting in his Vyasasana, giving his individual darsana to the tens of thousands of persons who came for just a moment, to offer their pranams, and offer him a garland, daksina, and some gift. Practically no one left without receiving a new tulasi necklace, especially the children and new visitors. On July 8th, this beautiful scene was repeated at Ananda Dhama, situated in Vrndavana.

On the next day there was a similar celebration at Sri Giridhari Gaudiya Matha in Govardhana. This celebration was somewhat more intimate, with less people attending. Throughout the day, many people would come to visit him, and his doors were continuously open in order to give darsana to new people. No one left without having received a personal darsana and talk with him.

On the next day he continued to Delhi, to his temple in Janakpuri called Sri Raman Vihari Gaudiya math, where the Vyasa puja celebration of Guru purnima was again celebrated with thousands in attendance. 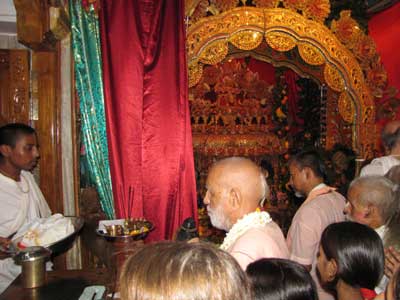 Jhulan-yatra, the swing festival of Sri Sri Radha Govinda, began on August 1st. Srila Bhaktivedanta Narayana Gosvami Maharaja stayed in Gopinatha Bhavan in Vrndavana from August 1st until the 5th. Each evening, the Deities would be placed on the swing and Srila Maharaja and the hundreds of devotees present would swing Them. 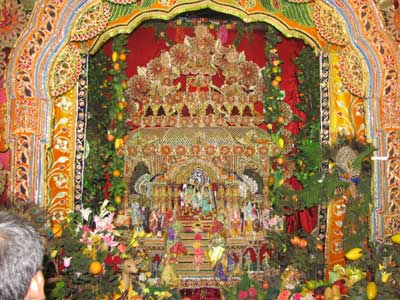 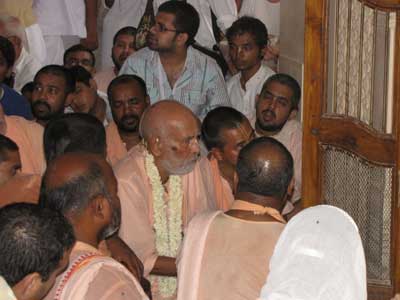 In the evening of August 2nd, 3rd and 4th, the annual Rupa Gosvami conference was held in Sri Rupa Sanatana Gaudiya Matha. Srila Maharaja and his disciples and also scholars from Vrndavana spoke each evening on the glories of Srila Rupa Gosvami. On Srila Maharaja’s request, there was also a morning session, at which time many Western disciples and Vaisnava scholars from various Mathas offered their hear-felt puspanjalis (offered flowers of glorifications from their hearts). 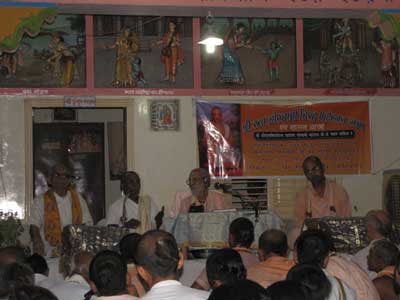 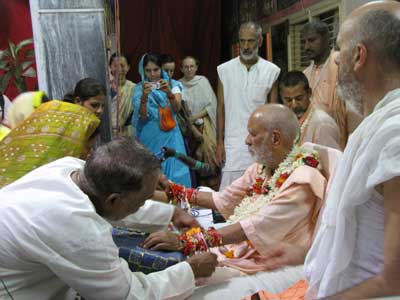 Putting rakhis on Srila Maharaja’s arm (above), is expression that means, “Gurudeva will always protect me.” In India, according to the Vedic Culture, all sisters express this to their elder brothers on that day. Originally and eternally, Baladeva is the protector of all. 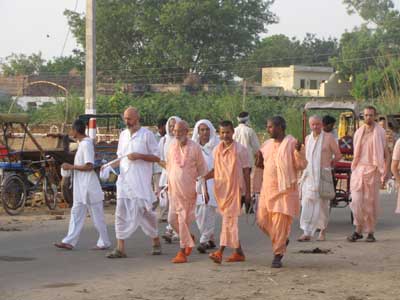 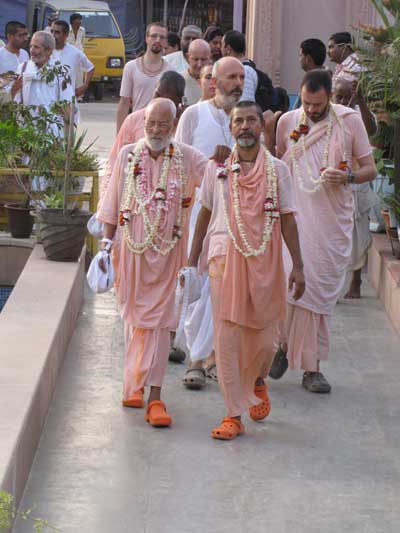 On August 13th, Srila Maharaja went to Mathura, to his Sri Sri Kesavaji Gaudiya Matha, to celebrate Sri Krsna Janmastami. On the evening of the 13th, he organized a very large nagara sankirtana parade, which was elaborately decorating the streets of Mathura for over four hours.

After offering arati to Sri Sri Radha-Krsna and Sri Caitanya Mahaprabhu, he indicated for the parade to begin, and it began – with a camel, an elephant, and a local brass band in front, followed by two children dressed up as Krsna and Balarama riding on two horses, and after that a kirtana party of mostly Indian devotees. Following this party were Sri Sri Gaura-Nitai on a chariot, a ladies' kirtana party, a float carrying children dressed up as Radha and Krsna, and a float carrying a child dressed as Dvarakadhisa Krsna. The third kirtana party, consisting mainly of western devotees, followed them, and they were followed by Srila Maharaja in his elaborately garlanded car. Finally, gloriously riding on a decorated bullock cart, sat Sri Sri Radha-Vinoda Bihariji and Sri Caitanya Mahaprabhu. 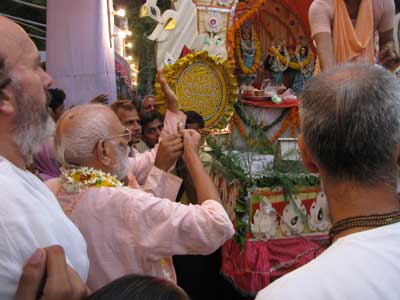 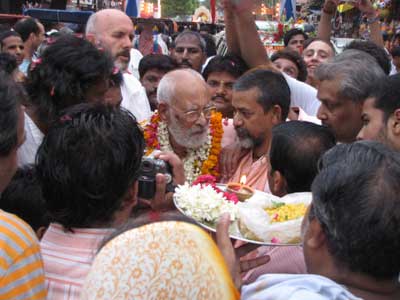 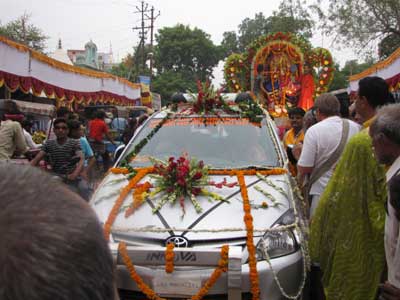 This summer in India has been one of the hottest summers as there was no rain. During the parade it began to rain, cooling down all the residents.

Srila Maharaja was very happy about this rain. He said that we went on procession throughout all the auspicious lanes of Mathura and therefore Krsna is so kind that He sent the rain.

The next morning, during his Janmastami glorification, he told his audience, “Krsna is so kind that He gave us all rain. We pray to Krsna that He will inspire Indra so that there will be more rain. Everyone is crying in India that there is no rain, especially the farmers, so I pray that there is more rain.” 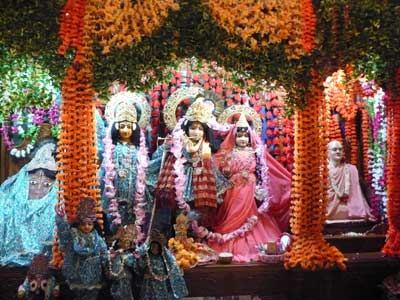 On the morning of Janmastami, bhajanas began about 6am at Sri Kesavaji Gaudiya Matha. Srila Maharaja led the devotees in singing various hymns of glorification to Sri Krsna, and then he spoke about Sri Krsna’s birth.

On the evening of Janmastami, from about 8pm until midnight, many wonderful singers performed in the temple. 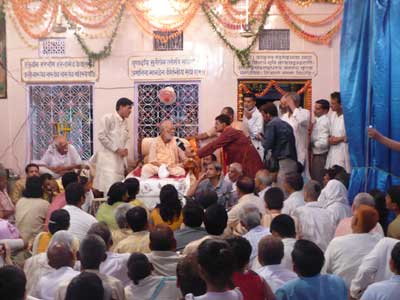 August 15th was the divine appearance day of Srila Bhaktivedanta Svami Prabhupada. At about 6:30 am, Srila Maharaja performed arati to him, and then spoke about his life and glories. 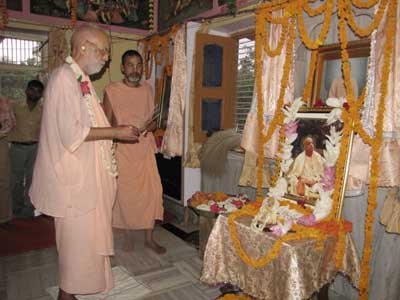 ”When he became al little older, his father bought a mrdanga for him. He would not play with toys; he would only play on the mrdanga. Thus, from childhood he was inspired to perform bhajana. He was a very great, learned scholar.

“He was the manager of a company called Bengal Medicals-Pharmaceuticals; he was put in charge of all the management there. After some time, he thought, “I should make my own medical-pharmaceutical factory,” and he did so.

“But he had not come to this world to be a medicine-maker or any other worldly professional man. When I requested him to take sannyasa here in Mathura, he told me, ‘When I was initiated in 1922, I began to read Srimad-Bhagavatam:

[“The Personality of Godhead said: If I especially favor someone, I gradually deprive him of his wealth. Then the relatives and friends of such a poverty-stricken man abandon him. In this way he suffers one distress after another.” (Srimad-Bhagavatam 10.88.8)]

“Sri Krsna says there, ‘To whom I give mercy, I take all his worldly possessions and make him a street-beggar.’ He told me, ‘I was chanting Krsna’s name, reading Srimad-Bhagavatam, and writing essays for the Harmonist.’ He shared with me that Srila Prabhupada had told him, ‘Your English is perfect. You can preach in Western countries.’ Srila Prabhupada showered his mercy upon him.

“I told him, ‘Please take sannyasa here. Now you are a ‘street-beggar.’’ He said to me, ‘After Bengal Pharmaceuticals, I started my own business, but it failed. Then I went to Allahabad, and there I began a big medicine shop. The first prime minister of India, Jawaharlal Nehru, and his daughter, Indira Gandhi, used to come to my shop for purchasing medicines. However, after some time, that business also failed.’

“Then he began to make his own medicines and distribute them himself, but that business also failed. Then, he came to Mathura and by chance I met him Bengali Ghat. I asked him, ‘What are you doing here? Please come to our Matha.” I brought him here and gave him a room next to mine, and I kept him near me.

“I told him, ‘Now no need of fear. Now you are a ‘street-beggar.’ You have nothing. So please take sannyasa. Srila Prabhupada wants this.’ In the meantime, my Gurudeva came and I requested him, “He is your bosom friend from your early days in Prabhupada’s mission. Please request him to take sannyasa.’

“There was an old person of ninety-four, named Sanatana dasa adhikari. He said, “If he takes sannyasa, I will also do so.’ They both became ready, and right here where you are all sitting a fire sacrifice and sannyasa ceremony were performed. I made his danda (sannyasa rod) and dor kaupin. I taught him how to use these things, and my Gurudeva gave him sannyasa.

“After taking sannyasa he went to Agra for preaching, and then to Jhansi. He wanted to establish a preaching center there in Jhansi. He called my Gurudeva, after which about twenty brahmacharis and sannyasis went there. He wanted to establish this Mahaprabhu (who is here now at Kesavaji Gaudiya Matha, on the altar), and by chance this was not done. So, he gave that Deity to Gurudeva and he brought Mahaprabhu here. So this Mahaprabhu is the ‘sign’ of Srila Bhaktivedanta Svami Maharaja.

”After that, he went to the western countries. He had not a penny with him. He requested Scindia Navigation to bring him across the ocean, and they promised to do so. It took about a month to reach America by steamship, and on the way he became very, very sick. He did not take any medicine, but simply depended on Krsna. He wrote a poem to Krsna, and after that he became better.

“He went to New York and, in a park, he was thinking how to preach. He used to sit in that park, under a tree, with his eyes closed, singing, ‘Sri Krsna Caitanya Prabhu Nityananda Sri Advaita Gadhadhara Srivasadi Gaura Bhakta Vrnda,” and “Hare Krsna Hare Krsna Krsna Hare Hare, Hare Rama Hare Rama Rama Rama Hare Hare.’

“His voice was so attractive. Hippies would come to that park in large numbers. They used to dance to his singing and after that some of them would offer him alcohol or anything else. After some time, hearing his classes and singing, so many hippies became his disciples.

“One of his hippie disciples is Syamarani, and another was Vrndavana-vilasini. They were very young and beautiful at that time, and they began to spread the mission of Pujyapada Srila Bhaktivedanta Svami Maharaja. In a couple of years, so many preaching centers were established. He translated so many authentic books, such as Sri Caitanya-caritamrta and Srimad-Bhagavatam, and they were distributed throughout the entire world.

“His disciples like Tamal-Krsna, Brahmananda, Giriraja, Vrajendra-nandana, and so many others came to him. He established preaching centers in the middle of oceans, on the top of hills, and everywhere – in America, England, Africa, Australia, and so many countries, and his books were distributed throughout the world. Thus, he brought a spiritual revolution.

“Today is his Birthday. I pray to him to shower his mercy upon me and all of his disciples, so that we may boldly preach the mission of Sri Guru and Gauranga and Srila Rupa Gosvami all over the world.

“I went to the western countries, to see where and how he preached, and to see what his influence was. Everywhere I went, I saw his influence. I saw thousands upon thousands of his disciples and followers. I saw how they were doing book distribution and other services.

“I pray for his mercy that I may preach and write books like him. By my Gurudeva and his mercy, I have also published more than a hundred books. They have been translated into many languages and, like his books, they are being distributed all over the world.

“Today I am offering my puspanjali unto his lotus feet.”