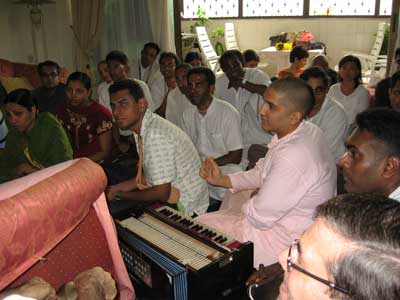 While in Singapore, Srila Maharaja stayed at the home of his disciples Sripad Dau Dayal dasa and Sushila devi, where he gave several darsans and one public lecture. During the chanting of bhajanas at one of these darsans, the devotees sang the beautiful song by Sri Govinda dasa called Bhajahu Re Mana. Srila Maharaja then explained that song:

“We wanted something other than Krsna, and therefore Krsna’s deluding energy called Maya took us and threw us into this world. Thus, from the beginning of this creation we have been searching for happiness, but we have not become happy. We are always surrounded by so many problems. We continuously experience the endless pain of birth and death, diseases, and problems given by other people. We are repeatedly dying and taking birth.

“But, Krsna is very merciful. At present He has not given you a birth like the donkeys, hogs, pigs and monkeys. He has kindly given you a human form. This body is nothing but a bag of urine, blood, and other unwanted things. Still, in this human form we are able to accept a qualified guru, and through him we can know Krsna and the relation between Krsna and all souls. By performing bhajana (devotional activities) we` can be liberated from this miserable world and attain the direct service of Krsna.

“I am requesting you; don’t delay in approaching a qualified guru. Then, by following his instructions, you should always remember Krsna, serve Krsna, and perform bhajana of Krsna, whose lotus feet are the reservoir of fearlessness (abhaya-caranaravinda). If anyone takes shelter of His lotus feet, that person will very soon have pure bhakti, pure devotion to Krsna. He will return back to Godhead, serve Krsna, and be happy.

“After hot days there are cold days, and then hot days again; after one season comes another season; they all come in rotation – and you spend all that time uselessly. You spend your nights sleeping and your days working hard like donkeys. For what? You cannot take a single farthing from this world. You will go empty-handed; you cannot take even one hair with you.

“So, ‘bhajahu re mana, sri nanda-nandana, abhaya-caranaravinda re.’ You must engage your entire attention in Krsna-bhajana. Somehow maintain your life by earning some money, but not in such a way that you give all your days and nights and entire energy to working. Otherwise, you will lament and regret this at the end of your life.

“You should know that your animals like dogs and cows – you want dogs more than cows – your wealth, reputation, sons, and all relatives are all mortal. Today they are here, and tomorrow you will see that they are gone.

“ ‘Kamala-dala-jala, jivana talamala’ – This life is compared with a drop of water on the leaves of a lotus flower. The lotus lives in water, and therefore there are some drops of water on it. However, no drops of water remain when the wind comes. Similarly, you should know that this life is not eternal. At any time, whether you are sitting here, or there, or even right now, you may die. Pariksit Maharaja was sure that he would live for seven days, but we do not know how long we will live. We do not have that assurance.

“I therefore request you to follow the instructions in this song we are now discussing.

“Govinda dasa is telling us not to be busy with worldly things. Always hear harikatha; hear about the sweet pastimes and transcendental qualities of Sri Krsna. Hear about how He became Yasoda-nandana, and how He killed Putana and other demons and gave them salvation. Always do this.

“By engaging in this way, your heart will very soon become pure, and worldly desires will disappear from there. The transcendental truths about Krsna will enter your heart, and thus you will achieve Krsna’s direct service. Do not delay.”

After three days, on January 1, 2008, Srila Narayana Gosvami Maharaja left Singapore and flew with his associates to Auckland, New Zealand. He was greeted at the Auckland airport by about 50 devotees, who had been eagerly awaiting him with kirtana. Previous to this visit, he had not been to New Zealand since 2002. 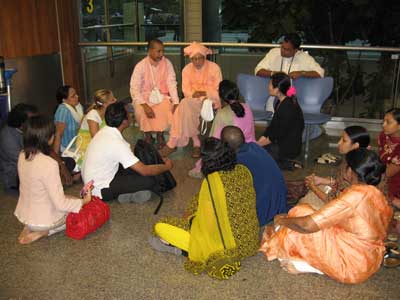 In the airport in Singapore before his flight to Auckland, New Zealand 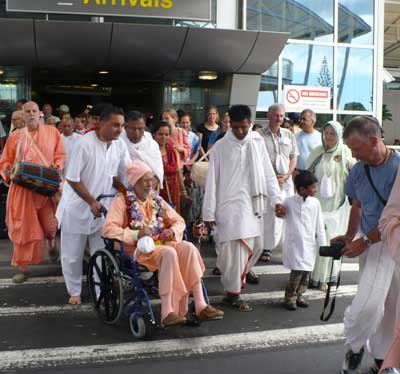 From the airport, Srila Maharaja and his party were driven to the home of Sripad Damodara dasa and Srimati Jayasri devi and their family, where he was residing until January 11. 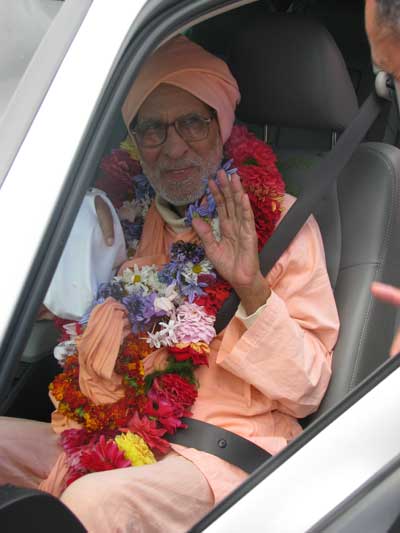