Srila Bhaktivedanta Narayana Gosvami Maharaja left Singapore on December 31, 2007 and arrived in Auckland, New Zealand, where he would be holding a week-long Harikatha Festival, beginning January 3rd. In Auckland, he resided very happily at the home of his beloved disciples, Sriman Damodara dasa and Srimati Jayasri devi dasi and their family.

There, every morning from about 6:00 am to 6:30am, along with about twenty disciples and guests, Srila Maharaja would take japa walks along the waterfront. 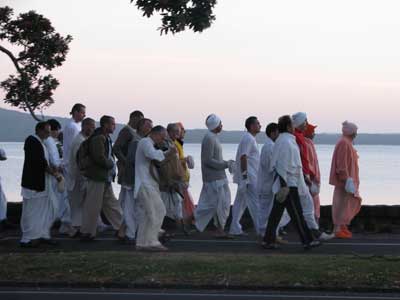 During the morning walk of January 3rd, a devotee asked, “Who is the worshipful Deity of Sri Prahlada Maharaja?”

Srila Narayana Gosvami Maharaja replied, “His worshipful Deity is everywhere, and everything is in Him. Sri Prahlada Maharaja is a maha-bhagavata, so he is able to see his Lord in that way.

“When Hiranyakasipu began to harass Prahlada and make problems for him, Prahlada’s worshipful Lord came in the form of Lord Nrsimhadeva. Actually, He was Narayana – Visnu-tattva – not the original form of the Supreme Lord, Sri Krsna.

“In some verses of the Srimad-Bhagavatam it is seen that Prahlada may have heard about Krsna from his Gurudeva, Sri Narada Rsi. Prahlada Maharaja lived in Satya-yuga [the Age of Goodness, millions of years ago]. Generally at that time, devotees had no conception of Sri Krsna in Vraja.

“Then, Sri Caitanya Mahaprabhu came to this world. He is Krsna Himself, but with the beauty and intrinsic mood of Srimati Radhika. When He came, He corrected all philosophical misunderstandings and established that service to Sri Sri Radha-Krsna under the guidance of Srimati Radhika (Radha-dasyam) is the supreme form of worship.

“In the last verse of Sri Siksastakam, Sri Caitanya Mahaprabhu prayed in the mood of Srimati Radhika:

[Let Krsna tightly embrace this maidservant who has fallen at His lotus feet, or let Him trample Me or break My heart by never being visible to Me. He is a debauchee, after all, and can do whatever He likes, but still He alone, and no one else, is the worshipable Lord of My heart.]

[May the Supreme Lord who is known as the son of Srimati Saci-devi be transcendentally situated in the innermost chambers of your heart. Resplendent with the radiance of molten gold, He has appeared in the Age of Kali by His causeless mercy to bestow what no incarnation has ever offered before: the most sublime and radiant mellow of devotional service, the mellow of conjugal love.” (Caitanya-caritamrta, Adi-lila, 1.4)]

“Then, following in disciplic succession, persons like me are teaching this same message. Thus, now you all know that Radha-dasyam – not Krsna-dasyam – is the supreme goal. Sri Krsna cannot give such service that Srimati Radhika can give.” 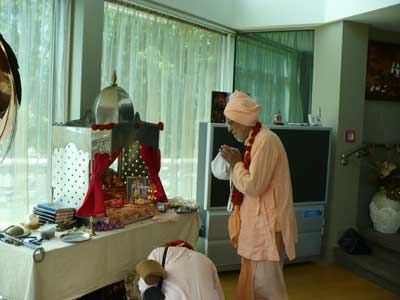 When Srila Maharaja and the devotees would return each morning to his disciples’ home overlooking Mission Bay, he would first offer his obeisances to the Deities.

He would then sit down in the living room and give darsan for about 10 or 15 minutes, and the twenty or thirty other devotees who had been waiting back at the house would also eagerly attend. At that time he would answer questions, correct philosophical misunderstandings, bless devotee babies, and so on. 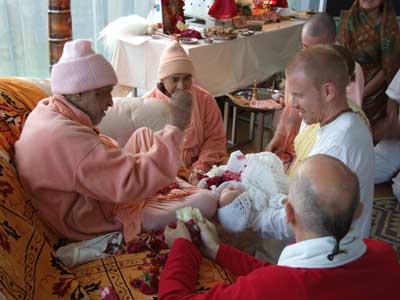 Srila Maharaja gave blessings to the 6 week-old baby girl of Sriman Venu-gopala dasa and Srimati Sudevi dasi. They had originally named her Varsana, and when they introduced her to Srila Maharaja, he told them that Varsana is a place, the birthplace of Srimati Radharani, and not a name. He then immediately renamed her Lalita dasi. 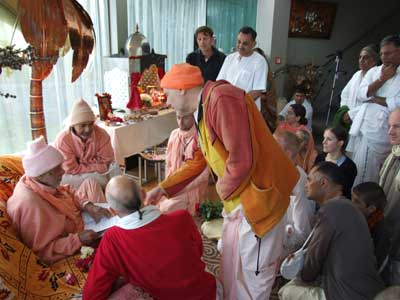 Srila Maharaja appreciated the magazine compiled by Sriman Balarama dasa and other devotees for distribution in relation to his Harikatha Festival. 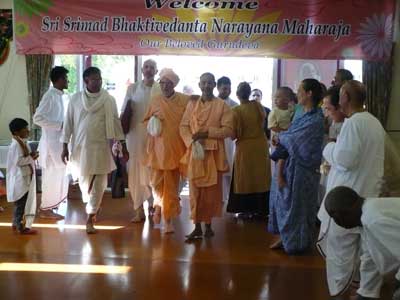 Arrival at the Hindu Heritage Center where the evening classes were held from January 3-8.

Many leaders of the Indian community were cordially invited to attend the hari-katha festival. One of the prominent leaders was Gopalan Krsna, the head-priest of a South Indian Temple known as the Stan Hope Temple, and many of his congregation members also attended. Praveen Bhai Patel, a trustee of the Hindu Heritage Center and leader in the community was also cordially invited, and he kindly gave a speech thanking Srila Maharaja for coming to New Zealand. After hearing Srila Maharaja’s hari-katha lectures, he received harinama initiation from him, along with about 50 other devotees.

Srila Narayana Maharaja gave his discourses in Hindi, and his lectures were translated by Sripad Bhaktivedanta Damodara Maharaja.

In his first discourse, Srila Maharaja began by giving his blessings to the organizers of the festival, to those who had decorated the hall, to those who made all arrangements, and to those who prepared prasadam. He then explained why Krsna came to this world and what He came to give. 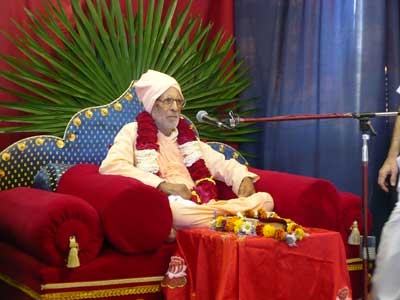 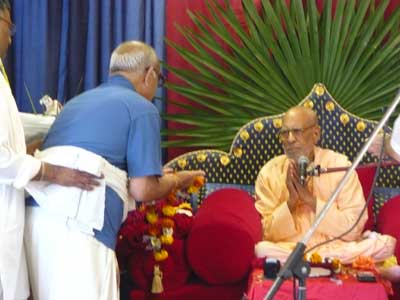 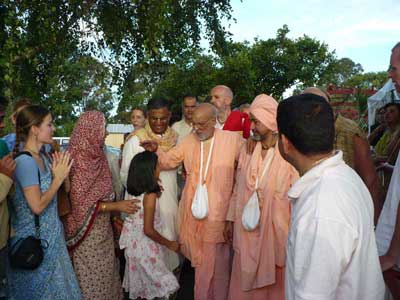 Blessings after the program