What's What, and Who's Who? 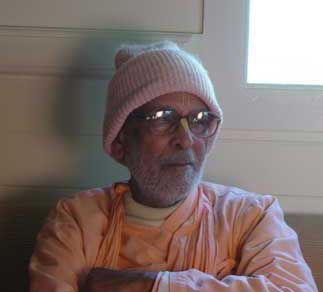 Please accept our humble obeisances. All glories to Sri Sri Guru and Gauranga. During Srila Bhaktivedanta Narayana Gosvami Maharaja’s visit to New Zealand, he gave regular evening classes on the nature of pure bhakti at the Hindu Heritage Center, where he discussed the various gradations of devotion and devotees, other than the associates of Sri Krsna in Vraja. He discussed the life and character of Dhruva Maharaja, Prahlada Maharaja, Ambarish Maharaja, Hanuman, the Pandavas and finally the devotion of Sri Uddhava.

In the mornings, just after returning from his daily early morning walk, he gave darsanas at the home of Sriman Damodara dasa, where he patiently answered the various questions of the many devotees and guests. The following is a darsan held on January 6th. On that day, the questions and answers were spoken in Hindi, and kindly translated by Sripad Damodara Maharaja:]

[Anuradha dasi:] Some people say that the books written by our acaryas and Gosvamis in disciplic sucession are not sastras (Vedic scriptures), but literatures. Can you say something about this? They say that Bhakti-rasamrta-sindhu (by Srila Rupa Gosvami) is not called ‘sastra’; it is called ‘literature’. They say that the ancient scriptures should be given preference, and if what is written by our acaryas does not coincide with what was written in the ancient sastras, we have to accept the ancient sastras.

[Srila Narayana Maharaja:] There is nothing wrong in this principle. If a body of writing is against scriptures such as Srimad-Bhagavatam, we cannot say it is sastra – rather, it is literature. However, whatever our Gosvamis have written is scripture, not literature, because our Gosvamis have established their writings on the basis of the ancient Vedic scriptures.

Veda is the original book of all knowledge. However, Veda is likened to a salt ocean, in the sense that practically no one can drink that water. Srila Vyasadeva has taken the Veda, distilled it, and made the Srimad-Bhagavatam.

From milk we get butter, and from butter we get ghee (clarified butter). Ghee is not a separate thing from milk. In the same way, the Srimad-Bhagavatam is like the ghee taken from butter, or fresh water distilled from the salt ocean. We take the pure, filtered water; everybody can drink it and use it. In the same way, all the books of Srila Rupa Gosvami and the other Gosvamis are the essence of the Bhagavatam. [As the Bhagavatam is like ghee from the butter of the Vedas, the Gosvamis’ writing is like ghee from the butter of the Bhagavatam.] For example, the verse anyabhilasita sunyam [*See Endnote 1] in Srila Rupa Gosvami’s Bhakti-rasamrta-sindhu is not in the Srimad-Bhagavatam, but it supports the Bhagavatam, and therefore it is also called sastra.

[Anuradha dasi:] Some brahmanas say that only a born brahmana can be a brahmana, and a person who is born as a sudra cannot become a brahmana.

[Srila Narayana Maharaja:] They are speaking wrongly. What was Sri Narada Rsi? He was the son of a maidservant. Srila Vyasadeva had a very low birth – anuloma-viloma. [viloma means the child’s father is of a lower caste than the mother. Here it is anuloma, where the mother’s caste is lower than that of the father] His mother was a fisherwoman. Vasistha Rsi and Agastya Rsi took birth from a pot (two discharges of semen that had been kept in the pot) and Gautama Rsi took birth from a rabbit.

[“According to the three modes of material nature and the work associated with them, the four divisions of human society are created by Me. And although I am the creator of this system, you should know that I am yet the nondoer, being unchangeable.”]

The divisions of human society, namely brahmana (priest or teacher), ksatriya (warrior or statesman), vaisya (agriculturalist, merchant, or businessman), and sudra (laborer), are all allotted according to ones qualities and work. Ravana was born as a brahmana [His father was the powerful brahmana, Visrava (the son of Pulastya Rsi), and his mother was a daitya.] (his father was a sage), but he is accepted as a raksasa (demon). Prahlada took birth in a raksasa family, but he is worshipped even by brahmanas. What caste was Lord Rama? He was a ksatriya, so why do brahmanas eat the remnants of his meals? Krsna took birth in a vaisya caste, and Hanuman took birth in an animal caste.

Thus, we should judge one’s classification according to one’s quality and activity, not by one’s birth.

[“If one shows the symptoms of being a brahmana, ksatriya, vaisya or sudra, as described above, even if he has appeared in a different class, he should be accepted according to those symptoms of classification.”]

If we see someone with the qualities of a different varna (type of work) than that of his birth, we should accept them in that varna. We should see one according to his or her qualities.

There was once a child named Jabala, and that child approached Gautama Rsi for initiation.*[See Endnote 2] Jabali was the name of a prostitute, and her son was named Jabala. Jabala went to Gautama Rsi to learn the Vedas.

Gautama Rsi asked him, “Oh son, what is your caste; your family line?”

The Rsi said, “Go and ask your mother.”

The boy asked his mother, and she replied, “When I was a young girl, I had a very bad character. I was a prostitute, and therefore I cannot tell you who your father was.”

Jabala returned to his Guru and said, “In her young age, my respectful mother was a prostitute, so she cannot say who my father is.  I don't know who my father is, therefore how can I tell you?”

Gautama Rsi said, “Oh, you are speaking the truth, and therefore you are really a brahmana.”

He then changed Jabala’s named to Satyakama Jabala – one who always speaks the truth – and since then, Jabala was accepted as a brahmana.

"The cultivation of activities that are meant exclusively for the pleasure of Sri Krsna, or in other words the uninterrupted flow of service to Sri Krsna, performed through all endeavours of the body, mind and speech, and through the expression of various spiritual sentiments (bhavas), which is not covered by jnana (knowledge aimed at impersonal liberation) and karma (reward-seeking activity), and which is devoid of all desires other than the aspiration to bring happiness to Sri Krsna, is called uttama-bhakti, pure devotional service." (Sri Bhakti-rasamrta-sindhu 1.1.11)]

At least, in India, one who cannot say his father's name, immediately he becomes degraded. Just like the Jabala Satyakama. Jabala Satyakama, he, he was... He went to Gautama Muni, "Please initiate me." And according to Vedic conclusions, initiation is meant for the brahmana. Brahmana, ksatriya and vaisya. Not for the sudras. Sudras are not initiated. And in the Kali-yuga, because everyone is a sudra, therefore he's first of all given training to become a brahmana. Then the sacred thread is offered. This is the process. Because actually, initiation cannot be given to anyone except a brahmana. So kalau sudra-sambhavah: "In the Kali-yuga, everyone is sudra." That is to be accepted without any disagreement. Kalau sudra-sambhavah. Because they have no samskara. Asamskrtah kriya-hina mlecchah. One who is not undergone the reformatory processes, garbhadhana-samskara, upanayana-samskara... There are ten kinds of samskaras, reformatory. One who has not gone, or one who is not permitted to undergo the samskara, he's sudra. Samskarad bhaved dvijah. Everyone is born sudra. By reformatory method, he becomes twice-born-by the spiritual master and Vedic knowledge. Vedic knowledge is the mother, and spiritual master is the father.

In this way, the Jabala Upanisad... He was asked by Gautama Muni, "Who is your father?" So he said that "I do not know." "Then go to your mother. Ask her." The mother could not say, that "I do not know who is your father. I have connection with so many men." So he came back to Gautama Muni, "Sir, my mother also does not know." She said that she had many connections, 'I do not who is particularly your father.' "But Gautama Muni immediately accepted him, "Yes, you are brahmana, because you are truthful. Nobody dares to say like that, that 'I do not know my father's name. My mother said that she had many connections with men.”

Because he was truthful, satyam samo damas titiksa, so by the quality, he was accepted immediately, and he was initiated, that "You have the qualities of a brahmana." A brahmana will speak truth, even to his enemy. If the enemy comes, if a rogue comes, "How much money you have got in your box?" a brahmana will say, "Sir, I have got one hundred dollars." (laughs) Just like the other day, in the Customs examination in Bombay, so our Brahmananda Maharaja was asked, "What is the value?" "No, I have purchased it." "What is the value?" "Two hundred dollars." He did not say that "I am using it for a long time." No. "It is new. I have purchased it." That's all right. Yes. But Kali-yuga is so implicated that sometimes we have to speak the untruth. But it is the business of the brahmana to speak the truth. No untruth. (taken from the Vedabase folio of Srila Prabhupada Bhaktivedanta Swami Maharaja, lecture in Vrndavana, 1974)]