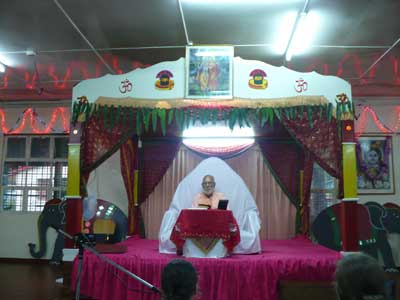 After the Harikatha festival in Auckland, New Zealand, Srila Narayana Gosvami Maharaja went with his party to Lautoka, Fiji for one week. He gave three classes in Fiji, at the Visnu Temple, to an audience of about three-hundred devotees and guests. He spoke about the glories of Lord Ramacandra and explained the deep meaning of pure bhakti and pure love through Lord Rama’s pastimes. He gave his classes in Hindi, and called on Sripad Damodara Maharaja every fifteen minutes to translate his divine words into English. 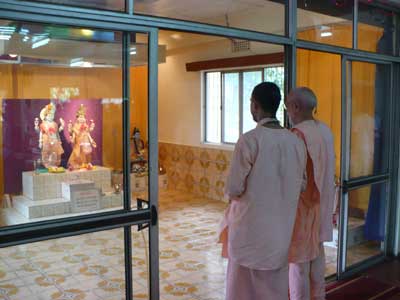 Offering pranams to the Deities of Lord Visnu and Laksmi-devi at the Visnu Temple. 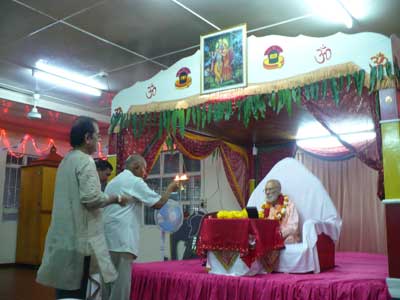 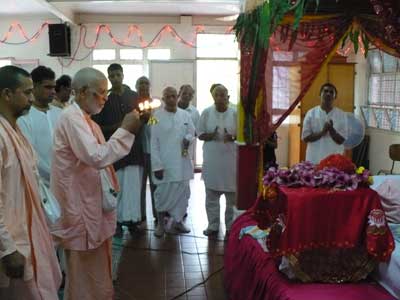 Performing arati to Srimad-Bhagavatam after class

Every morning, Srila Maharaja would walk along the waterfront, chanting japa and answering the questions of the devotees who were with him. After the morning walks, he would visit different devotees’ homes, where the family members would have a foot-bathing ceremony as is customary in Indian Vedic tradition. After that, he would speak for a few minutes about Krsna consciousness for the benefit of the families and all the guests present, and then he would honor some fruit prasadam and distribute it to the assembled devotees and guests.

On January 14th he visited the home of Nitin Punja, where he said, “True sadhus do not go to other people’s homes for their own needs. They do not need anything; they can easily receive a chapati from anywhere. They have left everything material, and some of them have been brahmacaris from birth. They come to others’ homes only to remind them: ‘Listen – you are not residents of this world. You are refugees. Old age will come, you have to give up this body; and you will have to leave everything behind when you die. Therefore, you must endeavor to become free from the entanglement of this material world. Perform your work, but don’t be attached.’

“Thus, in order to make everyone aware of these facts, sadhus travel here and there.

“Sri Narada Muni, Sanatana, Sanandana, Sanaka, Sanat Kumar, Sri Sukadeva Gosvami, Sri Caitanya Mahaprabhu and Sri Nityananda Prabhu went to the homes of the fallen souls. What did they do there? They gave the same instructions that I am giving you now.

“They would say, ‘O brother! I have come to your house; please give me a donation. What is that donation? Just chant Sri Krsna’s holy names: Hare Krsna Hare Krsna, Krsna, Krsna, Hare Hare, Hare Rama Hare Rama, Rama, Rama, Hare Hare. This is all you need to do, and in this way your life will be auspicious. Simply avoid eating meat and fish, don’t take alcohol and other intoxicants, and do bhajana of Krsna. This is the first duty of our life, and the final duty of our life. Perform your duties and do your work, but don’t forget Sri Krsna.’

“This is why we have come – to remind you.

“In modern times, Srila Bhaktisiddanta Sarasvati Thakura Prabhupada started this preaching movement. He made sannyasis, brahmacaris, and grhastas, and told them to go house to house to tell the residents: ‘Remember and meditate on the Supreme Lord. You are not this body; you are soul. Therefore, engage in bhajana of the Lord.’

May all the members of your family be happy, and may your lives be auspicious (kalyana) Even if you don’t have much time – when you first wake up and before going to sleep – chant the Lord’s names.

At the home of Sriman Jagadisa dasa Adhikari and his good wife Srimati Sunita dasi, Srila Maharaja addressed all the devotees by addressing Jagadisa dasa’s teenage son: “This human birth is very rare. This body is not the soul. You are sitting in front of me and speaking with me. Suppose that your life-air (prana) leaves your body; will you be able to speak or not? Why not? Your mouth is here, you are sitting here; simply your life-air has gone out; your soul is not here. What is the problem?

Jagadisa prabhu’s son did not know how to reply this unusual question, so Srila Maharaja asked again. When there was still no reply, Srila Maharaja said, “What class are you in? You are in college, aren’t you?” Jagadisa prabhu’s son and the other family members laughed with the understanding that in the material world, this spiritual knowledge is not known even to college professors, who are supposed to give wisdom to their students.

Srila Maharaja asked again, “If someone cuts off your feet, you can still speak; but if your soul leaves your body, will you be able to speak with me? When Girish said, “No”, Srila Maharaja asked, “Why not? The same body is there when it was speaking, but without the soul it is only lying down. Why can’t it speak?

“Who are you? Who is the ‘I’? Although this body is not ‘I’, but we think we are this body. We are not this body. In this body, there is a soul and Supersoul. We are soul; that is ‘I’. And the Supersoul is controlling all; He is the creator of the entire universe.

“Krsna is very merciful. Previously you were in this world as a dog, a pig and so many other animals. At those times you were moving here and there, seeking happiness, but there was no happiness anywhere. There was only great suffering and problems.

“Krsna has now mercifully given you this human form of life. He did this so that – somehow or other, by some reason or other – you will meet a sadhu, someone who has realized Krsna and himself, and who is detached from worldly desires. If you meet a sadhu, he will convince you that you are not this body, and that only in this human form you can realize that you are a soul.

“Nowhere in this world is there any happiness. One day you will have to become old. A little boy will also become old. Doctors and scientists cannot check old age for even a moment. One day you will have to give up your body, and you cannot take anything in this world with you – not your house, not a penny, not a hair, not your father, mother or anyone. You will go alone, and where you will go, even you do not know.

“Therefore, the first aim and object of our life in this world should be to understand “Who am I? Why am I suffering? Why am I dying and again taking birth? How can this be finished?” Krsna has mercifully given us this human form, and we should utilize this life to please Him.

“To please Krsna is not so difficult. Simply chant: ‘Hare Krsna Hare Krsna Krsna Krsna Hare Hare, Hare Rama Hare Rama Rama Rama Hare Hare.’ Krsna has invested all His power, mercy and attributes in His name; His name is very, very powerful. Don’t think that chanting His name is like calling a dog’s name. There is no difference between Krsna’s name and Krsna Himself.” 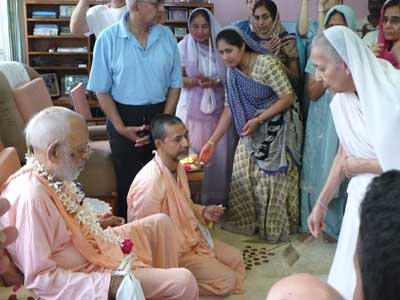 On another morning, Srila Narayana Maharaja completed his walk by visiting the home of Srimati Gaurimata dasi and her husband Sriman Bhuvan-mohana prabhu. After kindly receiving arati and Guru-puja, he began to tell a very interesting pastime of Sri Sri Radha and Krsna, for the pleasure and spiritual nourishment of all present. This pastime is from the book, Prema-samput, by Srila Visvanatha Cakravarti Thakura, which Srila Maharaja had translated and published in Hindi, and then his disciples translated and published in English:

Speaking in Hindi, Srila Narayana Maharaja explained that once, when Srimati Radhika’s in-laws were away from home, Krsna, disguised as a heavenly damsel, came to Her house in Yavat. He did this for the purpose of relishing Radhika’s words and moods concerning Her love for Him.

After some time, when Radhika had spoken to Her at length, the damsel told Radhika, “I have heard about Your glories so I came here to the Earth planet from the heavenly planets to meet with You. When I arrived here I saw that Krsna’s rasa-lila was going on in Vamsi-vata in Vrndavana. When You, for some reason or other, left the rasa dance for the forest, Krsna left all the other gopis to follow You. But, after being together with You for some time, He also left You. I became very angry with Krsna when I saw Your pitiful condition. Therefore, I have come to You.”

Saying this, the disguised Krsna began to describe Krsna’s many faults. She said, “It is true that Krsna has all good qualities, but one bad quality destroys the good ones. You have left everything – Your father, mother, brother, friends, husband, society, shyness, and the orders of Your elders – to love Krsna. And He is so cruel towards You that He left You and disappeared. Therefore, according to My opinion, You should not love Him, and if You do, then You will suffer even more in the future.”

Hearing these words of Krsna disguised as a celestial damsel, Srimati Radhika began to explain the nature of prema, and this explanation of Sri Radha comprises the book Sri Prema-samputa. 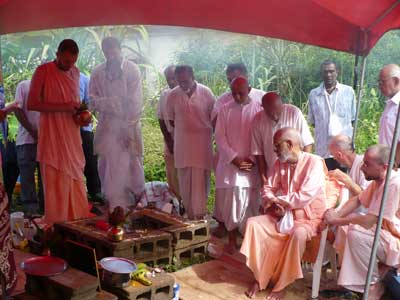 On January 15th, Srila Narayana Maharaja performed the future temple’s ground-breaking ceremony on the land where the devotees’ small temple / ashram is currently situated. This ceremony was similar to the one presided over by Srila Maharaja a week earlier in Auckland. The fire sacrifice and chanting of ancient Vedic mantras for auspiciousness was led by Sripad Madhava Maharaja and Sripad Damodara Maharaja, under Srila Narayana Maharaja’s direction.

Srila Maharaja gave instructions to the devotees in charge, Sripad Jagannatha dasa and Sripad Kantilal dasa, regarding how the temple should look. He said:

“It should not be a small temple. Build it like our Govardhana temple. It should be a beautiful temple that can seat at least three-hundred people. There should be a garden with fruits and flowers, and there should be a place for people who do service in our temple. 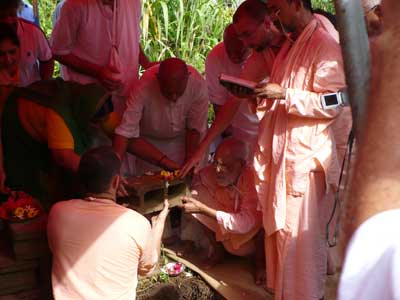 Srila Maharaja offered the first brick to inaugurate the foundation of the temple. 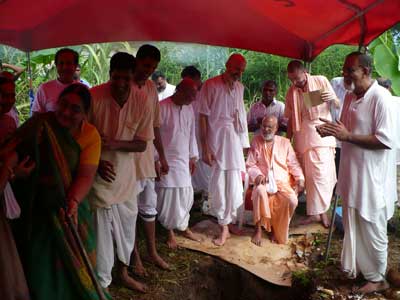 Devotees returned the earth to the dug-out hole in the land, where the Deities’ altar will be situated when the temple is built, and which was now filled with auspicious substances to ignite the success of the future temple. 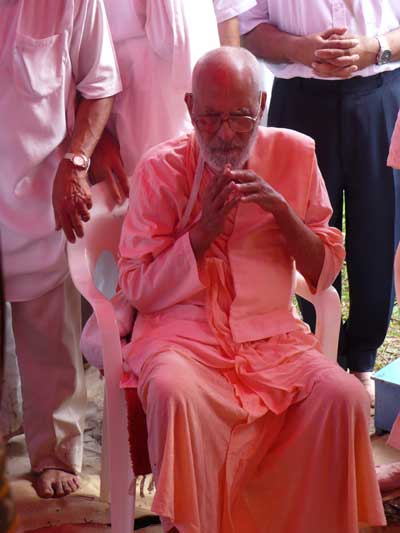 Concluding the ceremony by offering Jaya-dhvani prayers, in glorification and supplication to the disciplic succession of gurus and to the associates of Sri Caitanya Mahaprabhu and Lord Sri Krsna .