Over 200 devotees and guests assembled at the two and a half acres of land on Browns Road in Auckland, for the ground-breaking ceremony of the new Sri Krsna Caitanya Gaudiya Matha. The land is owned by Srila Bhaktivedanta Narayana Gosvami Maharaja’s disciple, Sriman Damodara dasa Adhikari, who created the plans for the temple and showed them to Srila Maharaja upon his arrival. Carefully looking at the photo of the proposed grand temple, Srila Maharaja gave his approval and further guidance regarding construction. 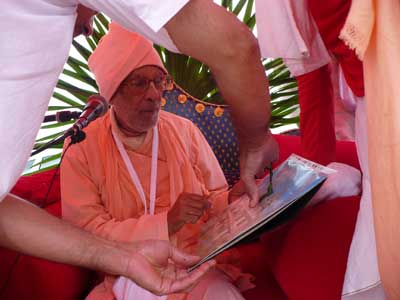 Srila Narayana Maharaja looked over all the details of the construction plans, which include the Deities’ altar room, the temple-room hall just adjacent to the altar room, the events hall, the library, the restaurant, and so on. 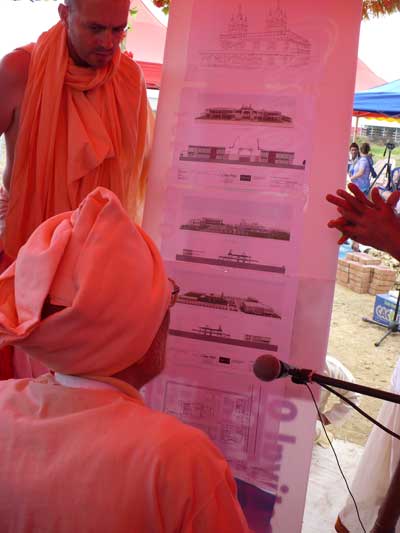 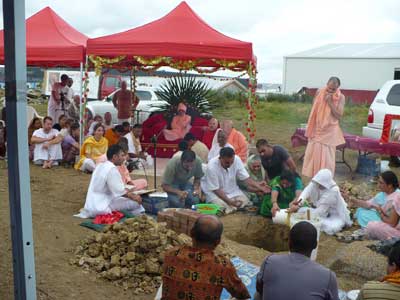 For the pleasure of their most worshipful Sri Guru, Gauranga, and Sri Sri Radha-Govinda, Sripad Damodara Maharaja and Ajaya Krsna dasa led the devotees in performing worship of Lord Nrsimhadeva puja and also the Nine-yogendras. They performed Vaisnava homa (fire sacrifice) according to the principles established by our guru-parampara. They performed apadevata vidai, the driving away bad souls and inauspicious elements in the earth by the chanting of mantras, and for this same purpose they chanted mantras as they threw in yellow mustard seeds. They performed kshetrapala puja, the chanting of mantras to the guards of the ten directions, and bhumi puja for building a temple on the lap of Mother Earth. They performed vastu-puja to propitiate the god of construction, and also kshetrapala-bali to propitiate the guard of the land. 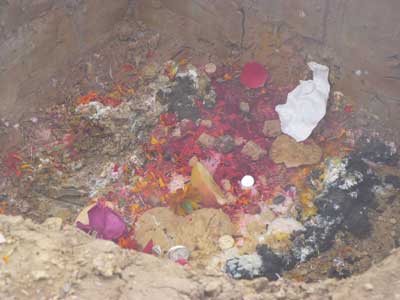 When the square hole was first dug, the devotees placed cow dung and cow urine to purify that land. Auspicious powders were then offered, along with cloth, water, milk, yogurt, ghee, honey, sugar, Ganges water, rose water, a thread for Vastudeva (the demigod presiding over that land), perfume, sandalwood paste, sindhura, rice, a garland, flowers, cooked prasadam, fruits, and mouth fresheners (pan, cloves, and cardamon). Each item was offered along with its respective offering mantra. Arati was performed, and then the devotees offered obeisances. 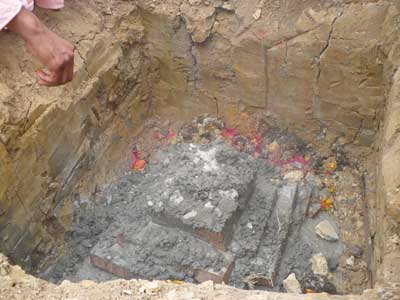 Around the sacred items and personalities, a construction of bricks were placed in such a manner that all of them were covered. Each brick had been washed, tied with red thread, and a swastika made of kunkum had been painted on each of them. Cement was then placed in between and on top of the bricks. 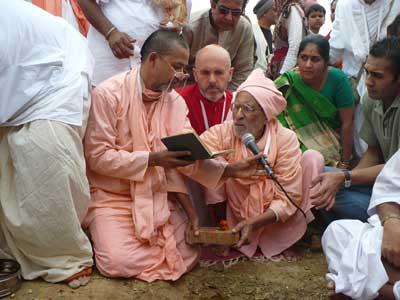 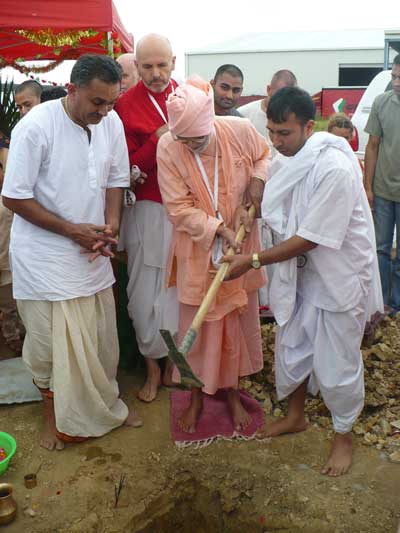 Srila Maharaja gave a short speech to conclude the ceremony, and the following is a transcription of his words of blessing:

“Today I am very happy. We have established temples in India – in Vrndavana, Govardhana, Mathura, Navadvipa, Mayapura, Calcutta, Jagannath Puri, and Delhi – and we are planning to establish preaching centers in Australia, Houston, and Badger. I am very happy that my wish has been fulfilled here by Damodara prabhu and his entire family.

“It will be very beautiful. There will be some cows here, so that there will be offerings of milk and milk products to Thakurji and the Vaisnavas who will be here. There will be beautiful gardens. I think there should be a health center also, to help the public. There should be a good library as well, and some social services by which we can serve the public. If it is needed outside of this temple area, some land can be obtained for a guesthouse so that visitors will come to hear hari-katha and attend arati.

“My blessings. I pray to Sri Krsna and Giriraja Govardhana to be merciful to Damodara prabhu and his family, so that a very beautiful temple will be built within a short time. I also request all the VIPs present here to help Damodara prabhu, so that he can complete the construction of this temple very soon.

“Also, my heartfelt blessings to pujariji, Ajaya Krsna dasa. He is very qualified. He has arranged all of these temple ground-breaking ceremonies in a good manner. He has done vastu-puja (worship of the presiding deity of the land where the construction will begin) and Pritivi-sthana (worhip of Mother Earth) in a good way. My heartfelt blessings are for him, so that he will be a very good devotee. I want that he will be a brahmacari in the future, and matha (temple) commander of this temple.”

Two days later, on the morning of January 6th, Srila Narayana Maharaja visited the current Sri Krsna Caitanya Asrama. He was very happy as he took a tour of the land, the cows, the cowshed, and the temple/asrama. He sat down in the temple room for a short question and answer darsana, and during that time he gave further guidance for the success of the new temple as follows:

“If the temple is there, all senior devotees will come. I think that if all the senior and junior devotees give respect to each other and have sweet behavior, everyone will come and attend our programs. On the other hand, by thinking, "I am the monarch and controller," no one will come. Our Govardhana and Mathura mathas are full. When I am there, over 600 people come. Our Mathura matha is very small (for this number); there is no space.”

Three days after this, on January 9th, Srila Maharaja returned to Sriman Damodara dasa’s home from his morning walk and gave a darsana, as usual. There he continued talking about the new temple-to-be-built. He said:
“This time, fifty devotees have taken harinama and diksa initiation. Now, gradually, the devotee congregation is becoming bigger here. I want that senior devotees like Krsna-Kanta prabhu and Balarama prabhu will preach. They know so much.

But also, Panditaji (Ajaya Krsna dasa) is very qualified. Now, he has left Mayavada philosophy and is hearing our classes. He is so much more attracted to us, and has become a pure Vaisnava. He was a teacher in a Sanskrit college, so he knows how to speak very well. He has so much speaking power. Now he is reading my books.

“I think it proper that on holidays like Janmastami and Ekadasi, and on Sundays, all of you should attend the programs at the farm, and give classes there. He should give respect to the senior Vaisnavas.

“In Mathura, India, I used to go to homes and give programs there. I used to invite those in each home to our grand-scale Janmastami procession with camels, elephants, kirtana parties, big bands, and with more than 500 devotees doing kirtana. In this way, I have preached in Mathura, Navadvipa and so many other places.

“Try to preach like this, all together. There should be no difference of opinion. You can take turns preaching. You can do house programs also. I think that so many new persons will be coming to the asrama, so they should hear all the topics that I have been speaking about.

“You should all help Damodara prabhu with the temple. I want the temple to be completed so that I can come and establish Thakurji (install the Deity). Perhaps the entire construction will take two years.

“(To Candramukhi and Ragalekha dasis) You and your sister can come and preach here from time to time. New Zealand is close to Australia.”

Sriman Venu Gopal dasa asked, “During the next two years, before the temple is built, should we get together at the Krsna-Caitanya Asrama, or should we have house programs?”

Srila Maharaja replied, “There should be house programs, and also on the farm (regular weekly programs at the Krsna-Caitanya Ashram). When there is no program at the asrama, then, at that time, house programs may be held.”

Sripad Madhava Maharaja added, “By house programs, preaching will increase. People will call their friends, and so many devotees will be inspired and take initiation. House programs can be held on Saturdays, and the regular weekly program can be held on Sundays.”