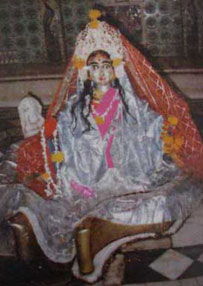 [Setting the scene: After visiting Sri Paramananda Puri's asrama, the devotees walked to Lokanatha Mahadeva's temple, chanting the half hour walk through the villages and open land of beautiful Jagannatha Puri dhama. Arriving at the site they passed through a very large gate and down wide stairs to a courtyard, on the right of which there was a large pond, and on the left of which there were some shops selling sweets and other foodstuffs.

Westerners are not allowed in many of the Indian temples, and this was also the case with Lokanatha Mahadeva. Among the 600 pilgrims accompanying Srila Narayana Maharaja on the parikrama, over 200 were Westerners. Srila Maharaja and the Indian devotees went into the temple while the Western devotees stood in the courtyard, performed acamana at the pond, chanted, and wished they could go inside.

After a few minutes Srila Maharaja came out of the temple alone, without the hundreds of Indian devotees, and sat down on a stone stab platform in front of the shops. All the Western devotees immediately gathered around him, eager to hear.

One of the Lokanatha Mahadeva pujaris approached and talked to Srila Maharaja for a few minutes, saying that he would allow the Western devotees entrance if they would give him money. Srila Maharaja rejected his proposal and began his hari-katha:]

Sankara is a very, very exalted mahabhagavata. He always serves Krsna and all His manifestations, like Rama, Nrsimha, Kalki and Varaha. In this world he has five kinds of manifestations: earth, water, fire, air, and ether. You cannot see other than these five. You can see water, you can see earth, you can see sky and you can see fire. Our body, the world and the universe are made out of these five elements. You cannot see the soul. If you render pure devotional service, then you can also see the soul. You can see Krsna first, and by His light you can see your own soul. So here in this world these are the five prominent elements, and it is Sankara who has taken their form.

We went inside the mandira, but we simply saw a room full of water. You are lucky to be out here, where there is a very big pond of water; so no need of going inside. You can see water here, and this is also a symbol of Sankara. In Bengal and other places there is an Ambulinga (linga means symbol), a linga made of water, to which you can offer your pranama. The pond here at Lokanatha Mandira is called Ganga Parvati Pond.

Those who want to make Krsna, God, their own property, ban others saying, "You cannot come into our temple." Krsna becomes very angry with them, and Sankara is also not pleased with them. Those who think, "Krsna is our property and we can therefore use Him for our maintenance", do not have bhakti. They will ban the whole world from entering, saying, "If you pay something, then you can go in; otherwise not."

Sankara is a manifestation of Krsna, and he is always hungry for love and affection. He is qualified to manifest from all the five elements and to serve his masters, Lord Krsna and Lord Rama. He is very kind. He was first in Kailasa, and then he shifted his place to Kasi Varanasi where he helped the atheist king of Varanasi. He also helped Paundraka Vasudeva, who became four-handed and challenged Lord Krsna. Krsna cut off Paundraka Vasudeva's head and also the head of Kasi-Naresa, the king of Kasi, who considered himself one of the best servants of Sankara. Sankara could not save him when Krsna's Sudarsana cakra burnt down Kasi Varanasi. [see Krsna book ch.66.]

Sankara simply fled. Where his deerskin fell, he did not know. He also left his trident and everything else, including his wife, and very quickly ran from there. He arrived in Ekamrakanana in Bhubaneswar, and took shelter of Lord Jagannatha. Lord Jagannatha told him, "Because you have come to my shelter, I will give you the post of Lokanatha. So don't fear. If anyone comes to Jagannatha Puri and takes my darsana without taking yours, his coming here will not be complete. He must come here to your place after having my darsana. Then he will be very happy."

Sankara is the abode of love, and in that regard Srila Visvanatha Cakravarti Thakura has written:

"O Lord Sankara, even Sri Narada Muni, Sanaka, and Sanandana are always worshiping you. You can give love and affection like that of the gopis. In your purest form of Gopisvara Mahadeva, you are very powerful. You are Hari-hara-eka-atma. Hari-hara-eka-atma means that Krsna has become your atma and you have become His atma."

Here atma means dearmost, or very beloved. Sankara can serve as Hanuman, as Bhima, as Madhvacarya, at the time of Mahaprabhu as Advaita Acarya Sadasiva, and in so many other forms.

[After Srila Maharaja uttered each half line, the devotees repeated:]

["O gatekeeper of Vrndavana! O Soma, all glories to you! O you whose forehead is decorated with the moon, and who is worshipable for the sages headed by Sanaka, Sanandana, Sanatana and Narada! O Gopisvara! Desiring that you bestow upon me prema for the lotus feet of Sri Sri Radha-Madhava who perform joyous pastimes in Vraja-dhama. I offer pranamas unto you time and again." (Sankalpa Kalpadruma 103, Srila Visvanatha Cakravarti Thakura)]

"O Gopisvara Mahadeva! We have come to you. Here your name is changed and you have become Lokanatha. But we don't know you as Lokanatha; we only know you as Gopisvara Mahadeva. You cannot cheat us. You can cheat Ravana, Kamsa, Jarasandha, and others, but you can never cheat us. This is because we have taken shelter of Yogamaya, Paurnamasi. If you cheat us we will complain to Paurnamasi and she will punish you. Do you remember when all the gopis slapped you and your cheeks became so swollen? Kindly remember this." Sankara will then come in the form of Gopisvara Mahadeva. He will be very helpful, and happy to give mercy.

I have given you a special thing, which I did not give to the Indian devotees. I like you most because you are feeling separation from Sankara. Sankara will therefore surely be merciful. He must sprinkle his mercy upon you.