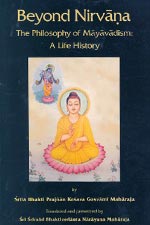 This book especially investigates the philosophy of Sri Sankaracarya, whose philosophical misinterpretations of the Vedas were so influential that not only did he succeed in driving Buddhism out of India, but what most of us now think of as Hinduism is fundamentally nothing but his brand of impersonal Mayavadism. To quote the author, "...it can be safely concluded that in truth, any philosophy which has the propensity to dilute, divide, and confuse the rational, logical or factual understanding of the Supreme Lord's personal form, has at some juncture been influenced by the deceptive forces of Mayavadism." Furthermore, Beyond Nirvana demonstrates that Sankaracarya's teachings are in the final analysis ironically nothing but a recycled form of Buddhism and in no way true to the original Vedic wisdom known as sanatana-dharma.