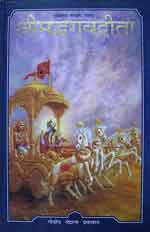 This profound translation of Srimad Bhagavad-Gita by Srila Bhaktivedanta Narayana Gosvami Maharaja is sure to inspire sincere students of bhakti in their practices. It is considered complimentary to the authoritative and popular Bhagavad-Gita As It Is by Srila A.C. Bhaktivedanta Svami Maharaja. This present edition contains the bhavanuvada of the Sarartha-varsini-tika (a shower of the essential meanings) of the illustrious Srila Visvanatha Cakravarti Thakura, which was originally penned in Sanskrit.  His commentary has been further illuminated by Srila Bhaktivedanta Narayana Gosvami Maharaja's Sarartha-varsini Prakasika-vrtti, which guides the reader into profound aspects of the siddhanta. Consequently, the innermost intentions of the Gita are revealed to the modern audience. Some of the brilliant Rasika-ranjana commentaries by Srila Bhaktivinoda Thakura, have been included within this Prakasika-vrtti.