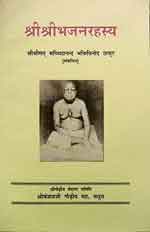 Sri Bhajana-rahasya is compiled by Srila Bhaktivinoda Thakura. He has collected into the form of a book several confidential hints from his own method of bhajana to guide sincere sadhakas who are performing bhajana under his direction. ... He [Srila Bhaktivinoda Thakura] was constantly reciting and relishing verses such as the ones in this book, thus becoming overwhelmed with bhagavat-prema. For sadhakas whose faith is on the neophyte platform, the system of arcana is provided. Many people are unable to understand the distinction between arcana and bhajana and therefore use the word bhajana to refer to arcana. One can practise bhajana by performing the nine kinds of devotion, navadha-bhakti. Because arcana is included within navadha-bhakti, it is also considered a part of bhajana. There is a difference between complete bhajana and partial bhajana. Arcana means to worship the deity with awe and reverence; that is, with knowledge of the Bhagavan's opulence and by observing etiquette. It is also arcana to serve the Supreme Lord with various paraphernalia according to rules and regulations and with the mundane conception of identifying oneself with the material body. ... A brief arcana-paddhati has been added as an appendix to this book.