Worthy of Being Called Sankirtana

Worthy of Being Called Saṅkīrtana

In the Bhakti-sandarbha (273) we find this passage: “Even if there is some other form of devotion ordained as duty in Kali-yuga, it should be performed with the item of bhakti known as kīrtana. No kind of bhakti, like residence in Mathurā, association with holy saints, service to śrī mūrti and audition of the Śrīmad-Bhāgavatam, is complete without śrī kṛṣṇa-kīrtana, but their fruit is accessible to one who performs it above everything.

In Hari-bhakti-vilāsa (11.137) a śloka from an old śāstra has been cited, which translates as, “Hari’s names are always present in the mouth of a person who has worshipped Śrī Vāsudeva (Kṛṣṇa) for hundreds of births.”* The best and foremost of all spiritual practices for attaining God Kṛṣṇa’s grace is sankīrtana. If the other sādhanas (practices) are favourable or helpful to it, then, only, are they worthy of the name; otherwise they should be known to be no more than obstructions to the proper sādhana. Whether one is a child, old or youthful, male or female, learned or illiterate, rich or poor, beautiful or ugly, pious or sinful – whatever condition of life one may be in – there is no other course of spiritual practice than śrī kṛṣṇa saṅkīrtana.

* This śloka is cited by Śrīla Bhaktivinoda Ṭhākura in his Śrī Bhajana-rahasya, First Yama, Text 6. Śrīla Bhaktivedānta Nārāyaṇa Gosvāmī Mahārāja gave an elaborate commentary on this verse within that book. That commentary is the basis of the following chart: 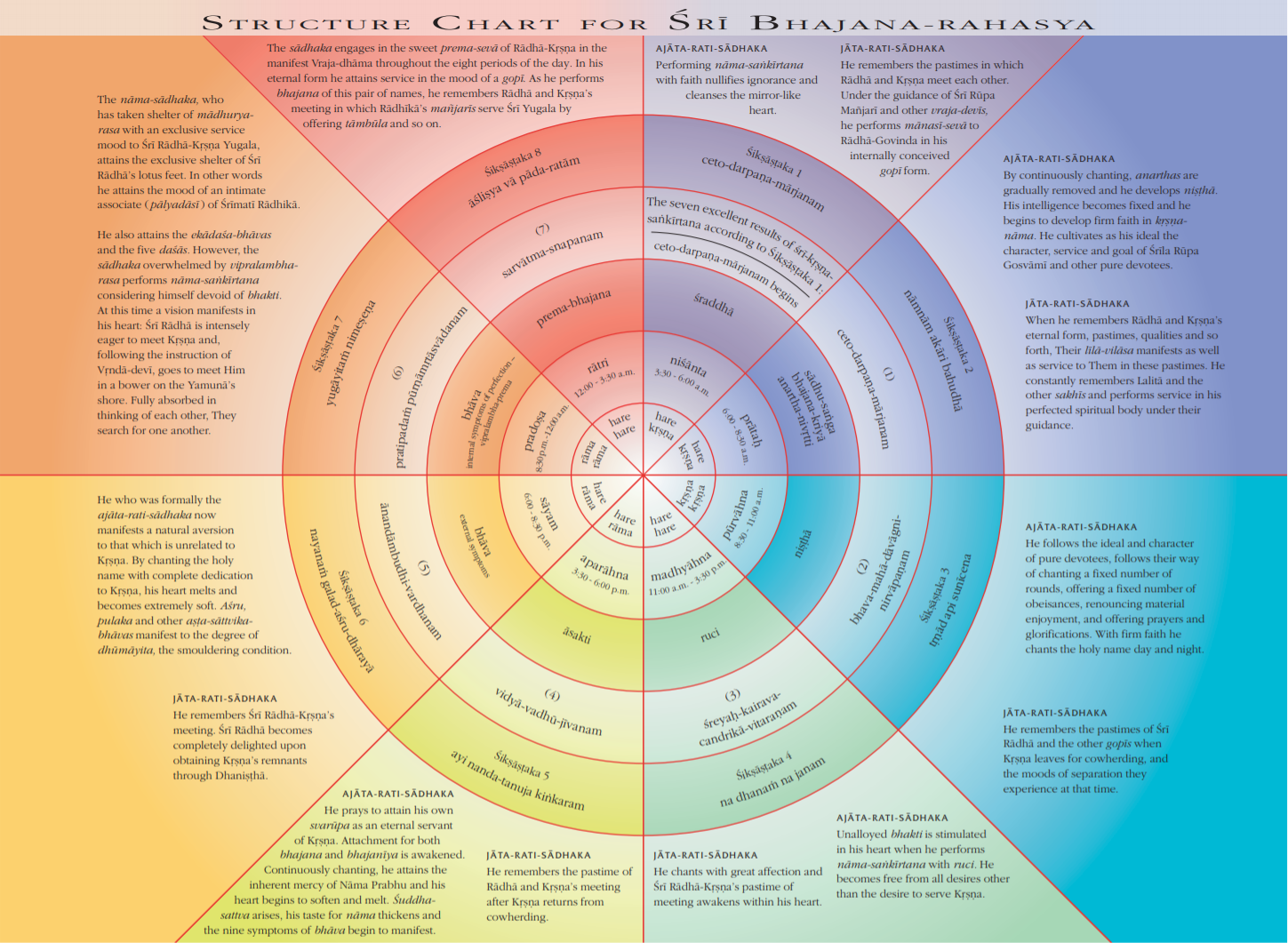 Kīrtana is called saṅkīrtana when it is performed by many persons together. But will it be worthy of being called saṅkīrtana if some worthless people shout together without any ardour for serving God? It will be true hari-saṅkīrtana when we join the saṅkīrtana of true devotees who serve God according to the principles laid down in the Vedas and allied śāstras. On the other hand, it is not hari-saṅkīrtana when we take part in the kīrtana conducted for the prevention of the epidemic of cholera or pox, or for prosperity in one’s trade, or for gain, respect and fame... such kīrtana is māyā-kīrtana.

So long as we avoid joining the kīrtana conducted by true devotees, or those who hold perfect kṛṣṇa-kīrtana, māyā will be deluding us in various ways. If we instead join the kīrtana of those who are not anxious for their own true well-being, who hoodwink themselves, then we shall not attain well-being ourselves. There will be no saṅkīrtana if we follow those who have imitatively decorated their bodies with beads and marks of a Vaiṣṇava without receiving instructions from the true Vaiṣṇavas and who proceed to shout out some names that appear like God’s Names.

Adapted from The Gauḍīya, Volume 8, Number 7
by the Rays of The Harmonist Team