Who Is a True Disciple?

Who Is a True Disciple?
by Srila Bhaktisiddhanta Sarasvati Thakura Prabhupada

Question 1:
Who can understand the secrets of bhajana?

Answer: Only an exceptionally intimate servitor (viśrambha-sevaka) of the lotus feet of śrīla gurudeva, who is the best among the ardent followers in the line of Śrī Svarūpa Dāmodara and Śrīla Rūpa Gosvāmī, can fathom the mysteries of bhajana. An intimate servitor is a devotee with guru-niṣṭhā, or one who has unflinching faith in and love for the lotus feet of śrīla gurudeva. The Śruti, or authorized Vedic literature, states:

“The true import of the scriptures is revealed in the hearts of those great souls who have the same unflinching bhakti for their guru and the Supreme Lord.”

Question 2:
How will we attain spiritual strength?

Answer: If we serve śrī gurudeva with ardent devotion and love, profuse spiritual strength will enter our heart. Only by service to the spiritual master and the holy name can one attain bhakti-bala, the strength of devotion.

Question 3:
When we act out of a sense of duty, is it bhakti?

Question 4:
What does anyābhilāṣa mean?

Answer: “As long as I remain in this world, I will simply gratify my senses.” Such a desire, separate from the desire to please Kṛṣṇa, is anyābhilāṣa.

Question 5:
How can one’s false identity as the doer be dispelled?

Answer: Be lower than a blade of grass – in other words, identify yourself as a servant of the Supreme Lord. Then the conception of being the doer will not exist at all. At that time, one can chant Kṛṣṇa’s holy name blissfully.

Question 6:
When does the living entity attain his ultimate welfare?

Question 7:
Whose prayers does Kṛṣṇa hear?

Answer: “O Kṛṣṇa, I do not desire anything from You for my own happiness. I respectfully comply with whatever You desire. If that means I have to suffer, then that suffering will be my pleasure. You are the embodiment of auspiciousness, and therefore there is nothing inauspicious in Your arrangements.” If a servitor has this kind of sincere faith, Kṛṣṇa will accept his prayers; otherwise, He will not.

Question 8:
Who is a real disciple?

Answer: One is only a real disciple if he can surrender fully to the lotus feet of śrī gurudeva, upon whom the Supreme Lord Śrī Kṛṣṇa has conferred the full responsibility for his well-being.

“It is incumbent upon me to submissively accept whatever arrangements śrī gurudeva makes for my well-being.” This is truly the attitude of a real disciple. Without it, inauspiciousness is inevitable. Real disciples are those who constantly serve the Supreme Lord under the guidance of the spiritual master, without becoming enjoyers – that is, without trying to use their senses to enjoy the sense objects.

Everything in this world is an instrument for serving śrī guru; everything is meant for Kṛṣṇa’s service. If one wishes to enjoy these instruments of service to śrī guru, one will never attain any auspiciousness. If we cannot perceive guru in everything, then inauspiciousness is inevitable for us.* A true disciple realizes this in the core of his heart and makes uninterrupted service to the spiritual master and to Śrī Kṛṣṇa the sole objective of his life.

*   A true disciple does not see the ordinary objects of this world the way the common man sees them. He has guru-darśana in everything he does and sees. Someone who does not have guru-darśana sees mundane reality and looks upon things with a mood of enjoyment. Moreover guru-darśanameans to see everything as superior to oneself and meant for Kṛṣṇa’s service. 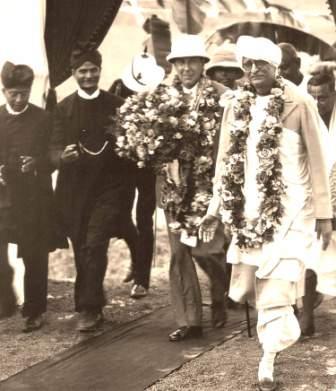 A real disciple constantly has guru-darśana, both internally and externally. Although he regards himself as small and insignificant (laghu) his vision is great and profound, for he does not view anything in relation to his own enjoyment.

A true disciple regards the spiritual master as the kin of his soul, as very dear to Śrī Kṛṣṇa, as the object of his love and affection, as his eternal master, as eternally worshipful, and as his life and soul. A real disciple knows that śrī gurudeva is simultaneously the epitome of bhakti and an embodiment of the Supreme Lord. Śrī gurudeva is dearer to Śrī Kṛṣṇa than His own life, and is His non-different manifestation (prakāśa-vigraha).

There is no possibility of attaining service to Śrī Kṛṣṇa without becoming the servant of the lotus feet of śrī gurudeva. Only those who perform service to śrī guru are real Vaiṣṇavas, or real disciples. Besides them, everyone else is ahaṅkāra-vimūḍhātmā, “bewildered by false ego” [see Bhagavad-gītā, 3.27]. In plain words, they want to become enjoyers.