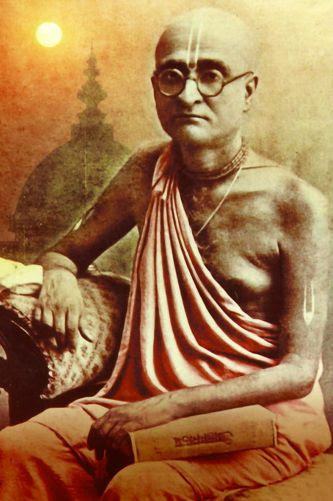 It is true that God has no material body, but he has His sat (eternal) cit (all-sentient) ānanda (all-blissful) transcendental body. His body is only visible to eyes that are free from matter. To the material eye, God is formless, but to the transcendental eye He has His body of cit, or all-sentience.

Those mūrtis (forms of God) that are prepared and worshipped by those who have not seen this cit body of God – those who do not have true eternal eyes cleansed with the collyrium of love of God – are of course idols, and all the worshipers of those idols are indeed idolaters.

If a pure entity, an unmixed soul, sees that eternal form of God and receives it in his own pure receptacle, and then takes that transcendental form from his heart and places it into the world, it brings to light the intrinsically and essentially true form of God. That form never deserves to be called an idol.

Even when God descends into this phenomenal world, He remains untouched by the influence of māyā by dint of His inscrutable power. In the same way, His true form, which is revealed within the heart of the unmixed entity – His devotee – remains above the influence of māyā even though it descends here. For this reason, śrī mūrti is referred to in Vaiṣṇava philosophy as His arcāvatara (worshipable descent).

Adapted from The Gauḍīya, Year 20, Issue 11
By the Rays of The Harmonist team