An Offering of Transcendental Memories – Part One

[His reverence for my guru-pādapadma]

The founder of that āśrama, pūjyapāda Śrīmad Bhakti Jīvana Janārdana Mahārāja, had made grand arrangements for the vyāsa-pūjā of his most worshipable gurudeva, nitya-līlā-praviṣṭa oṁ viṣṇupāda Śrī Śrīmad Bhaktisiddhānta Sarasvatī Gosvāmī Prabhupāda. Many Vaiṣṇavas gathered for the festival.

At the beginning of the function, the disciples of pūjyapāda Janārdana Mahārāja came, on the order of their gurudeva, to offer flowers at the lotus feet of my gurudeva, aṣṭottara-śata-śrī Śrīmad Bhakti Prajñāna Keśava Gosvāmī Mahārāja, who was seated on a beautifully decorated seat.

Śrīla Gurudeva directed them to offer flowers at the lotus feet of their gurudeva, tridaṇḍi-svāmī Śrīmad Bhakti Jīvana Janārdana Mahārāja, saying, “In regard to worship, it is the injunction of the scriptures to first perform arcana-pūjā of the lotus feet of one’s own śrī guru-pādapadma, followed by worship of the feet of one’s param-guru (grand spiritual master), the guru-paramparā and then Śrī Bhagavān. Bhagavān has personally stated:

[One must always worship one’s guru first, and only then worship Me. If one follows this process properly, one will naturally attain all perfection. But if one neglects this process, everything will be fruitless.]

Therefore, it is inappropriate to transgress this traditional rule.”

After that, paramārādhya Gurudeva also instructed his most dear Śrīmad Bhakti Jīvana Janārdana Mahārāja to [first] receive arcana, pūjana, and puṣpāñjali[from his disciples]. Pūjyapāda Śrīmad Janārdana Mahārāja regarded my guru-pādapadma as his śikṣā-guru; therefore, without any hesitation, he followed his instruction. His disciples proceeded to joyfully and splendidly worship their gurudeva with sixteen articles (ṣoḍaśāopacāra) and offer puṣpañjali (flowers). Thereafter, in great jubilation, they all offered flowers at the feet of my gurudeva and received his merciful blessings.

Throughout his life, whenever pūjyapāda Janārdana Mahārāja remembered this incident, he would always mention, with tears in his eyes, my guru-pādapadma’s magnanimity, parental affection for his followers, his expertise in bhakti-siddhānta, and his guru-niṣṭhā. 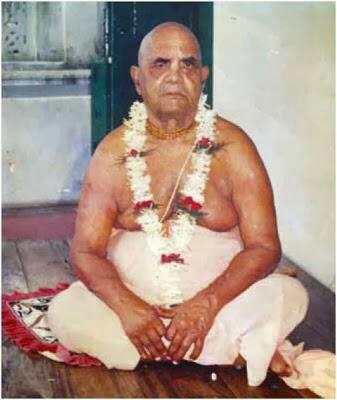 [A rasika and bhāvuka bhakta]

I first had the darśana of pūjyapāda Mahārāja in 1947 when I came to Śrī Devānanda Gauḍīya Maṭha, the main maṭha of Śrī Gauḍīya Vedānta Samiti.  Then, he was a naiṣṭhika-brahmacārī. It was around that time that he established his illustrious maṭha in Khaḍagpura. He came to perform Śrīdhāma Navadvīpa parikramā under the guidance of my guru-pādapadma, bringing with him some faithful pilgrims from Śrī Śyāmanānda Gauḍīya Maṭha, Medinipura. While on the parikramā, Śrīla Guru-pādapadma would occasionally order him to speak hari-kathā, and as he would listen to that hari-kathā, Śrīla Guru-pādapadma would become supremely elated.

Pūjyapāda Śrīmad Janārdana Mahārāja’s name at that time was Śrī Anantarāma Brahmacārī. It was from my spending that time in his company that our relationship  gradually began to thicken. He was endowed with all the qualities befitting a Vaiṣṇava. His natural disposition was to be sweetly-spoken, humble, tolerant, never wanting respect for himself and always ready to give respect to others. He was well-versed in scriptures like Śrī Hari-bhakti-vilāsa, Bṛhad-bhāgavatamṛta, Śrī Bhakti-rasāmṛta-sindhu, Ujjvala-nīlamaṇi, Lalita-mādhava, Vidagdha-mādhava, Stava-māla, Stavāvalī, the “Śrī Vaiṣṇava-toṣaṇī” and “Sārārtha-darśiṇī” commentaries on Śrīmad-Bhāgavatam [by Śrīla Sanātana Gosvāmī and Śrīla Viśvanātha Cakravartī Ṭhākura, respectively], and Śrī Baladeva Vidyabhūṣaṇa’s Govinda-bhāṣya, and he was firmly established in the perfect conclusions (siddhānta) of Vaiṣṇavism. He was perpetually engaged in speaking hari-kathā. Notably he was a rasika and bhāvuka bhakta. As a regulation , he would daily worship tulasī, behold ārati, mark his whole body with the name of his worshipable goddess, Śrīmatī Rādhikā, and lovingly recite stavas and stutis.

[His exclusive mood of service to Śrī Rādhā]

In his hari-kathā, I have particularly observed that he was a śrī rūpānuga Vaiṣṇava ācārya. On the aforementioned vyāsa-pūjā festival, daily at the time of brāhma-muhūrta, I noticed how he would recite, with intense love, stavas and stutis like Śrī Rādhikāṣṭakam, Śrī Gāndharvā-saṁprārthanāṣṭakam, Śrī Viśākhānandadābhidha-stotram, Śrī Utkaṇṭhā-daśakam, Śrī Cāṭu-puṣpañjali, Śrī Kārpaṇya-pañjikā-stotram, Śrī Utkalikā-vallariḥ, Śrī Rādhā-kuṇḍāṣṭakam, and Śrī Govardhana-vāsa-prārthanā-daśakam. When I heard him do this, extreme faith in these stavas and stutis arose within me, and from then on, following his footsteps I began to recite them. By constantly being in pure association (sat-saṅga), my faith in them increasingly developed.

I had heard that among Kṛṣṇa’s rāgātmika associates, the gopīs are topmost. Among them, some have the same affection (sama-snehā) for Rādhā and Kṛṣṇa, some have more affection for Kṛṣṇa (kṛṣṇa-snehādhikā) and others have more affection for Śrī Rādhā (śrī rādhā-snehādhikā). Among the śrī rādhā-snehādhikā, the gopīs headed by Śrī Rūpa Mañjarī are foremost. And the rāgānuga-sādhakas under their guidance are foremost among sādhakas. I have observed this mood in pūjyapāda Janārdana Mahārāja. When he would explain the following verses in his hari-kathā, his internal exclusive mood of servitude to Śrī Rādhā (rādhā-dāsya) would thoroughly manifest.

"O Devī Gāndharvikā! Today, in utter desperation, I throw myself on the ground like a stick. Filled with great distress, I implore You with a choked voice to be merciful to this fool and count me as one of Your own."

"He Devī Śrī Rādhike! I am Yours, I am Yours! I cannot live without You. Knowing this, please give me a place at Your lotus feet."

"O Varoru Rādhā, it is as rare to fulfil my hope as it is to attain an ocean of nectar, but I pass my days, greatly longing to fulfil it. Now You must give mercy to this poor, unhappy person. What to speak of my life, everything – my residing in Vraja and even my service to Kṛṣṇa – is useless without Your mercy."

"When, with rasa, will I serve Śrī Rādhā, whose arrow-like sidelong glance causes Śrī Nanda-nandana to faint, the flute to fall from His hands, the peacock-feather crown to slip from His head, and His yellow cloth to fall from His body?"

"O daughter of Vṛṣabhānu Mahārāja, ocean of rasa, that beautiful boy who wears a gracefully tilting peacock feather in His hair is actually the original Personality of Godhead. Still, He is always falling at the feet of Your maidservants and pitifully begging them with many humble words to gain entrance into Your kuñja where the two of You engage in Your playful loving pastimes. My life would be successful if I could even be one stick in the broom Your maidservants use to clean Your delightful kuñja."

[His affection for Vaiṣṇavas and his cows]

Almost fifteen years ago, at the special request of pūjyapāda Janārdana Mahārāja, pūjyapāda Vāmana Mahārāja and I went to see him at Śrī Gaura-vāṇī-vinoda Āśrama. We were all charmed by the way he served Vaiṣṇavas and the example he set by doing so. His darling Kālindī, Gaṅgā, Śyāmalā and other cows would be standing on the veranda, yearning for his affection. He had so much fondness for them.

One day, he [Śrīla Bhakti Jīvana Janārdana Mahārāja] very affectionately said to me, “Tell me, tell me, what is śrī rāgānugā and śrī rūpānugā? Are they the same or does each contain a speciality? I have asked many Vaiṣṇavas, but I was not fully satisfied by their answers.”

When I heard his question, at first I felt somewhat hesitant to give an answer before someone so well-versed in siddhānta. However, at his repeated insistence and upon pūjyapāda Vāmana Mahārāja’s indication, I, like a student under examination, said, “According to what I have heard from śrī guru and Vaiṣṇavas and from what I have understood from continuous study of bhakti-śāstras, my firm conviction is that if those who develop a greed to attain the beauty of the services and moods of the eternally perfect associates in dāsya-, sakhya-, vātsalya-, and madhura-rasa, as described in the rasa-śāstras Śrī Bhakti-rasāmṛta-sindhu and Ujjvala-nīlamaṇi, and perform sādhana-bhajana following the eternally perfect moods (nitya-siddha-bhāva) [of one of the those associates] out of longing to attain the beauty of those services and moods, they are called rāgānugā-sādhakas.

“However, those who have developed a greed to follow in the footsteps of Śrīla Rūpa Gosvāmī – his innate form (svarūpa) engaged in serving Rādhā and Kṛṣṇa and accordingly, his eternally perfect and meticulous skill in performing yugala-sevā, his greater affection for Śrī Rādhā (śrī rādhā-snehādhikā-bhāva), as well his other moods – and out of an ardent longing to attain the above-stated moods perform sādhana-bhajana accordingly – they alone are rūpānuga-sādhakas. As an associate of Śrī Gaura, Śrīla Rūpa Gosvāmī has performed sādhana-bhajana in his form as a sādhaka, and in his pure, spiritual form (śuddha-śarīra) as Rūpa Mañjarī, he serves Śrīmatī Rādhikā in partiality to Her. Only those who follow Śrī Rūpa in this way, in both of these moods, are rūpānugā. There is a special consideration in this regard: every rūpānugā is rāgānugā, but not every rāgānugā is rūpānugā.”

Hearing this, pūjyapāda Mahārāja became overwhelmed with emotion and said, “Today, I have become extremely delighted to hear your deliberation on this. It is what I wanted to hear. Prior to this, no one has so clearly presented to me such a fully perfect and conclusive discernment [on this topic].”

Rays of The Harmonist On-line, Centennial Edition, Year 1, Issue 12, "An Offering of Transcendental Memories, Part One", is licensed under a Creative Commons Attribution-Share Alike 3.0 Unported License to ensure that it is always freely available. You may redistribute this article if you include this license and attribute it to Rays of The Harmonist. Please ask for permission before using the Rays of The Harmonist banner-logo.