❝Maintain powerful enthusiasm and forbearance within your heart. If you envision the smiling faces of śrī gurudeva and the Vaiṣṇavas and remember their instructions and teachings, you will find peace of mind at all times, in all circumstances.❞

From the book "A True Servant, A True Master" (Letter 53) 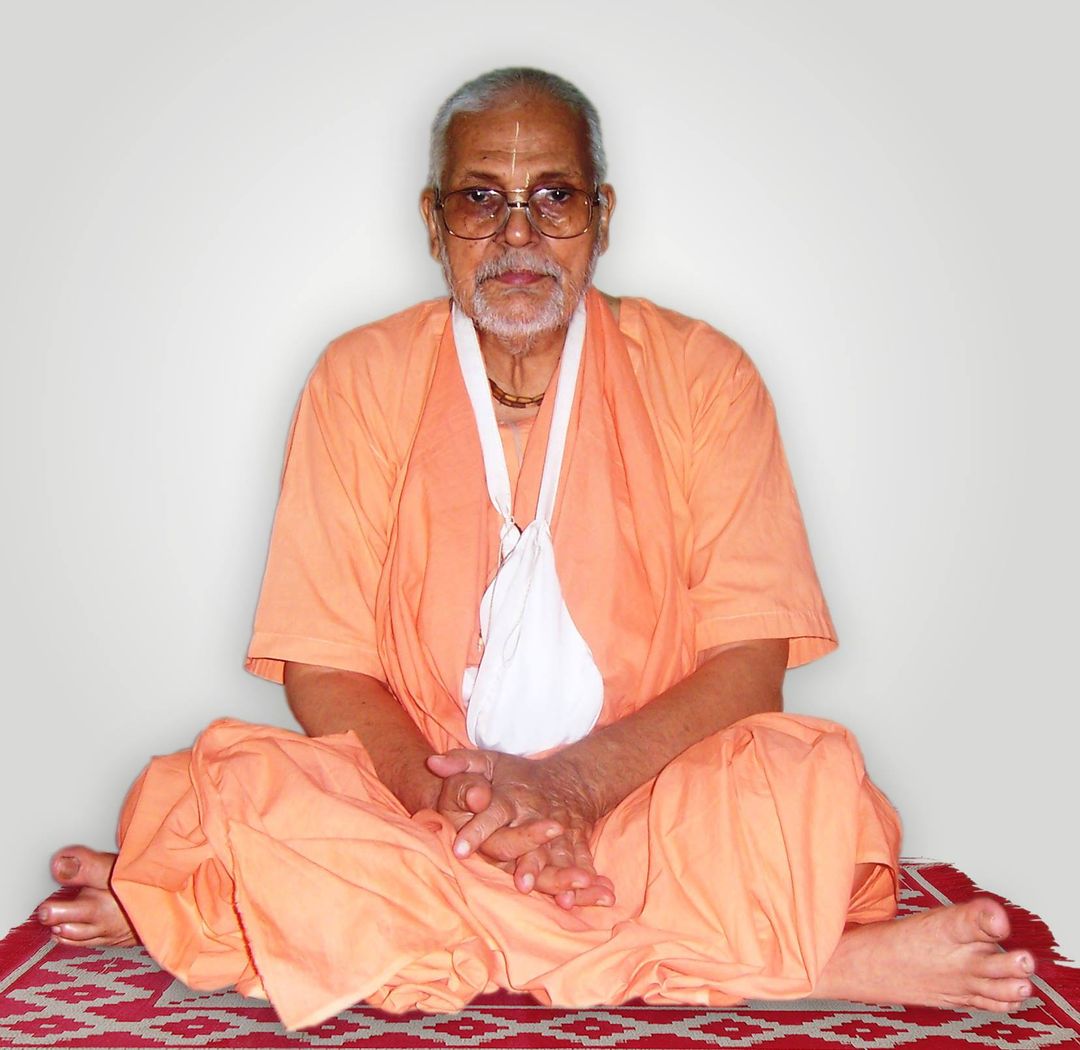 A Sincere and Humble Vaiṣṇava

Śrīla Bhaktivedānta Vāmana Mahārāja came to reside in Śrīla Prabhupāda’s maṭha when he was quite young. Although he was still at school he cleaned Ṭhākurajī’s pots and performed several other services. Śrīla Prabhupāda noted his service attitude and mercifully gave him harināma initiation. By nature Śrīla Vāmana Mahārāja was extremely soft-hearted; he never quarrelled with anyone. During his life in the maṭha he had the fortune of serving Śrīla Prabhupāda and all his associates. He would especially take responsibility for maṭha residents who became ill. When he went preaching with my Guru Mahārāja (Śrīla Bhakti Dayita Mādhava Gosvāmī Mahārāja) he cooked and performed a variety of services.

He clearly understood the deep siddhānta (philosophical conclusions) of several scriptures, and his heart held a special honour for the instructions of guru, Vaiṣṇavas, and śāstra. He was well established in knowledge of the ślokasof Śrīmad-Bhāgavatam. Yet, although his knowledge was so vast, I noticed that he was never inclined to push himself forward to speak kathā or give lectures in order to gain prestige. This was extraordinary. And I never heard him speak his own glories when he had finished his discourse.

Śrīla Vāmana Mahārāja was para-vidyānurāgi, attached to transcendental knowledge. He was proficient in his knowledge of the philosophical truths of the bhakti śāstras. He had astonishing tolerance, he was devoted to bhajanaand he was free from pride. He relished reading and if he did not have a certain book, he would borrow It.

His Indestructible and Unshakable Faith

Following the disappearance of Śrīla Prabhupāda a formidably thick, dark cloud covered the Gauḍīya Maṭha. Many so-called stalwart disciples of Śrīla Prabhupāda became entangled in sense-enjoyment, many returned to their previous āśramas, and many gave up their saffron cloth, put on white and married. Śrīla Vāmana Mahārāja was very young at that time, yet as a surrendered devotee he demonstrated undeviating niṣṭhā and patience that was high, like the peak of a mountain.

[O King, a person steeped in sinful activity can become purified if he engages in serving Kṛṣṇa’s pure representative, the bona fide guru, and in this way learns to dedicate himself to Kṛṣṇa’s lotus feet. Such purification is not possible by performing austerities and penances, by practising celibacy or by other processes of purification.]

Śrīla Vāmana Mahārāja had tremendous dedication to Bhagavān, as described in this śloka. He endlessly served Śrīla Bhaktl Prajñāna Keśava Gosvāmī Mahārāja and the devotees with him, such as Śrī Narahari Sevā-vigraha Prabhu, when they were in jail. He did not lose his faith, become restless, leave the maṭha and become a gṛhastha.

Several people, however, tried to convince him to stop serving them. “O brother, you came here to perform hari-bhajana. How will you benefit by serving people in jail?”

But he had an amazing realisation. He replied:

[The Vaiṣṇava behaves in such a way as to completely renounce asat-saṅga. This refers to the association of those who are materially attached, such as those who associate with women for sense enjoyment, and those who are not devotees of Śrī Kṛṣṇa. Neither is saintly.]

“This I have learnt from the exemplary life of Śrīla Prabhupāda; therefore, I will exclusively take vaiṣṇava-saṅga. I will serve Vaiṣṇavas only, even if they are in jail.”

Another person contested, “But if they are Vaiṣṇavas, why are they in jail?” To this Śrīla Vāmana Mahārāja replied, “If a piece of gold is found in a golden husk of grain, does its value decrease?”

In this way they continued with their attempts to shake his faith, until finally he said:

[Non-devotees cannot perceive the Vaiṣṇava’s transcendental qualities, just as an owl cannot see the rays of the sun, even though it has eyes.]

Seeing his firm faith, all were silenced.

His Attachment to Glorifying Vaiṣṇavas

When Śrīla Bhakti Prajñāna Keśava Gosvāmī Mahārāja disappeared from this world, we attended his viraha-mahotsava, the assembly held in separation from him. My Guru-pādapadma, oṁ viṣṇupāda Śrī Śrīmad Bhakti Dayita Mādhava Gosvāmī Mahārāja, was the chair-person (sabhāpati) of that assembly. At that time he acknowledged Śrīla Vāmana Mahārāja as an exemplary guru-sevaka, who was always engaged in preaching śuddha-bhakti. On occasion we would witness his intense attachment to glorifying Hari, Guru and Vaiṣṇavas.

In 1994 the viraha-mahotsava of Śrīla Bhakti Jīvana Janārdana Mahārāja was observed in Khadagpur. At that time Śrīla Vāmana Mahārāja was in Madras receiving medical treatment. He had been invited to preside over the assembly as the sabhāpati, and therefore had to journey from Madras to Khadagpur. But unfortunately the train was late. When he did not arrive in time, I was chosen to be the sabhāpati. By the time he arrived, five or six Vaiṣṇavas had already spoken.

I requested him to speak and he asked me to give him a time limit. I replied, “Mahārāja, you are the actual sabhāpatiof this assembly, so for you a time limit does not apply.” He was ill, but he spoke on and on. His servants held up the clock to indicate he should stop, but he did not even look in their direction. He spoke hari-kathā without slightly considering the needs of his body, thus demonstrating his attachment to glorifying Śrī Hari, Guru and Vaiṣṇavas.

A Perfect Candidate for Mercy

Mercy does not come to one who begs for it simply as lip-service, but it comes automatically for one who does sevā. You will hear people saying, “Mahārāja, please give me your mercy”, “bestow your mercy upon me Mahārāja”. But they don’t know that you don’t get mercy just by asking for it. Furthermore, you will not be able to retain the mercy unless you have the necessary foundation, even if the person giving mercy wants to give it to you.

Once a man came to Gaura Kiśora dāsa Bābājī Mahārāja and repeatedly begged him for mercy. Bābājī Mahārāja took off his kaupīnas and offered them to him.* The man fled. On the other hand, mercy will automatically come to the person dedicated to sevā, not to one who makes a show of begging for it. The story of Bhilanī Śabarī from rāma-līlāillustrates this point. From a very young age, she used to go to the jungle to fetch wood, and upon her return home, she would give a little wood to an old, helpless Bābājī. She did this for many years. One day, the Bābājī stopped her and said, “I am poor, and there is nothing of this world I can give you in exchange for your service to me, but if you take bath and come back here, I can give you a mantra that will give you the darśana of Śrī Rāmacandra.”

*Kaupīnas are worn by one who has accepted the renounced order. In other words, Śrīla Bābājī Mahārāja was giving him the mercy to become a renunciate.

This story shows that mercy of śuddha-bhaktas automatically falls upon a person who is sevonmukha (imbued with a service attitude). We can see this in the life of Śrīla Vāmana Mahārāja.

His Full Command Over the Urge to Speak

His speech was full of gravity; we never heard frivolous words come from his mouth. Several times I heard him say, “Dekhibe, śunibe, bolibe nā – watch, listen, but don’t comment.” In his life he practised this ideal perfectly and completely. He would never transgress maryādā, proper Vaiṣṇava conduct.

In the mood of Śrīla Prabhupāda, he never ordered anyone around. This applied to all Vaiṣṇavas, even his own disciples and servants. In order to instruct them he would never say, “You do this,” and “you do that.” Instead he used language that was sweet and soft. “Mahāprabhu has given these instructions for all of us to follow,” he would say. “We will benefit by following them. This is the advice of Hari, Guru, Vaisnavas.” I never heard him say, “I want it like this. Everyone must do as I say.”

Once, devotees came to our Purī maṭha to perform parikramā of Purī-dhāma. One mother left her child in the maṭhaand went on parikramā. Śrīpāda Madanaseṭha Prabhu, who at that time was looking after the maṭha there, began to feed the child malpuā, sandeśa and other sweets. The boy enthusiastically accepted the sweets that were affectionately offered to him, and even began to snatch them off Madanaseṭha.

The parikramā party finally returned to the maṭha, but his mother had gone to purchase something from the market and did not return with the party. The boy noticed his mother’s absence and began to wale loudly. He became so worked up that no one could pacify him. The devotees lovingly offered him sweets, but he hurled to the ground those same foodstuffs that he was previously snatching and eating.

This is viraha. That boy became dissatisfied with the best of things. In his intense feelings of viraha, he wanted only his mother – nothing and no one else. This is really how to take association. And the manner in which he cried, “Mother, mother!” is real nāma. A person can experience separation from Hari, Guru and Vaiṣṇavas to the degree he puts his energy into pleasing and serving them.

Deity worship, pūjā, harināma and so forth are never successfully performed unless accompanied by a feeling of separation. We will be elevated by feelings of separation from Hari, Guru and Vaiṣṇavas, and if we lament for anything in this world we will be degraded. Our sole assets are remembrances of the Vaiṣṇavas. Remembrances of this world will be calamitous for us. Śrīla Vāmana Mahārāja’s ideal example of how to serve pure devotees is certainly worthy of my prayers and glorification.

Translated by Rays of The Harmonist team

From Rays of The Harmonist No. 15 Kārtika 2005,
“Jewels from the Ocean of Separation”