“I will personally take care of you” 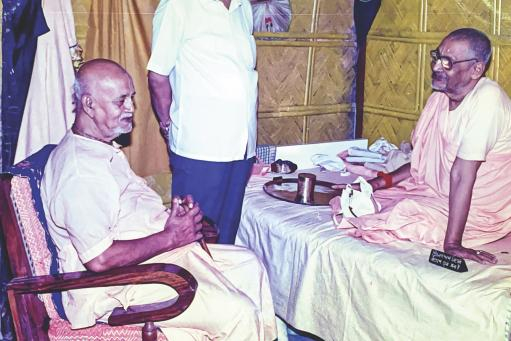 Once, when I (Rasika-rañjana dāsādhikārī) was in Navadvīpa, I went to offer praṇāmas to pūjyapāda Trivikrama Mahārāja in his bhajana-kuṭīra. As we discussed various topics, pūjyapāda Trivikrama Mahārāja said, “Once, in a conversation with Vāmana Mahārāja, I said to him, ‘Mahārāja when I will grow old, who will take care of me and make efforts to help me? I am getting worried about this even now.’ Vāmana Mahārāja replied, ‘You should not worry about this. If nobody will be there, I will personally take care of you and will personally clean your urine and stool. In this regard you need have no worry or anxiety.’ The way Vāmana Mahārāja said this to me actually made me free from any anxiety or worry. And he did not speak mere words. He has actually been very conscientious about this.”

While speaking this incident, tears began to roll down from the eyes of pūjyapāda Trivikrama Mahārāja. 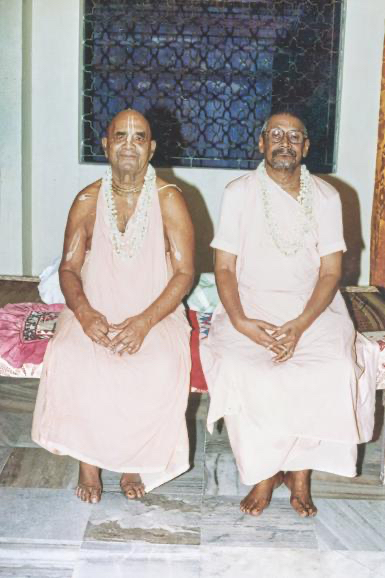 Having received this order from Śrīla Guru Mahārāja, that disciple, along with his wife, went to the room of Śrīla Janārdana Gosvāmī Mahārāja on the second floor of the āśrama. He offered praṇāma to him and, informing him of the instruction that Śrīla Guru Mahārāja had just given him, requested him to bestow harināma and dīkṣā upon his wife.

Śrīla Janārdana Gosvāmī Mahārāja said to him, “Bābā, you should again go to your Guru Mahārāja, Śrīla Vāmana Gosvāmī Mahārāja, and have your wife take harināma and dīkṣā only from him. It is always best if both husband and wife are initiated by the same guru. Also, tell him that I am asking this: Does he not consider this maṭha his own? Is that why he does not want to give harināma-dīkṣā here? And also, if he makes anyone his disciple, does that person not become my disciple also? Does he consider us separate? Go and tell him that I am requesting him to grant harināma and dīkṣā to your wife.”

That concerned disciple again went to the third floor, to the room of Guru Mahārāja, and told him all that Śrīla Janārdana Gosvāmī Mahārāja had said to him. Śrīla Guru Mahārāja said, with a mild smile on his face, “Hari hari! Kabe mui vaiṣṇava cinibo? – O Hari, when I will be able to understand a Vaiṣṇava?” He gave harināma-dīkṣā to that disciple’s wife and told them, “Now go and offer praṇāma to pūjyapāda Janārdana Gosvāmī Mahārāja and inform him that I have obeyed his order.”

Such a wonderful relationship was there between them.

In truth, narrowmindedness does not exist in the hearts of śuddha Vaiṣṇavas, nor do they have a conception of “mine” and “not mine”. In their vision, every jīva is part and parcel of Bhagavān. They fully realize that we are all in the line [paramparā] of Śrīman Mahāprabhu and a display of any kind of discrimination towards another maṭha or towards the residents of another maṭha shows a lack of tattva-jñāna and transcendental realization.

“That Swāmījī came for darśana of Gopālajī a few days ago” 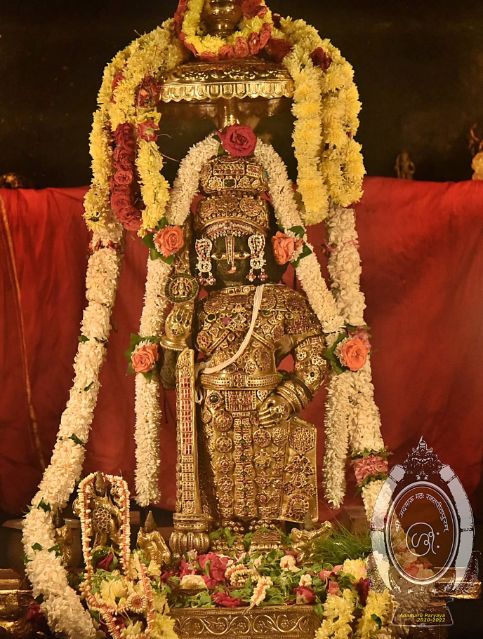 For a long time Śrī Guru Mahārāja – Śrīla Vāmana Gosvāmī Mahārāja – nourished a desire to have the darśana of dadhi-manthana-daṇḍa-dhāri Śrī Bāla-gopālajī [child Kṛṣṇa who holds the churning stick in His hand]. This deity in Udupi was established by Śrī Madhvācārya, the principal ācārya of the Brahmā-Mādhva-Gauḍīya sampradāya. For various reasons, however, Śrīla Guru Mahārāja’s visit to Udupi never seemed to happen.

Once, while staying at the house of a devotee in Bhubaneshwar, Guru Mahārāja decided to take four sevakas with him to Udupi, and he arranged for the air tickets. Two days before they were due to leave, however, Guru Mahārāja became unwell and had to return to Kolkata and cancel his trip. He was a little saddened by this.

When the pujārī came out and saw the two brahmacārīs holding up a photo of a sannyāsī before Gopālajī, so that the person in the photo could take darśana of Gopālajī, he came closer and saw the picture of Guru Mahārāja. To the brahmacārīs surprise, he said, “This swāmījī came for darśana of Gopālajī, just recently, a few days ago. I placed a prasādī garland around his neck and gave him some laḍḍu prasāda from Gopālajī. That swāmījī offered daṇḍavata-praṇāma to Gopālajī and offered some praṇāmī (donation) for His sevā.  At that time, Swāmījī was alone; no one was with him.”

The two brahmacārīs couldn’t believe the words of the pujārī, as they had seen Guru Mahārāja in Kolkata in ill-health and completely resting, as per the advice of the doctor. Still, they did not mention anything about Guru Mahārāja’s illness to the pujārī.

When they returned to Kolkata, they informed the sevaka of Guru Mahārāja of everything they had heard from the pujārīof the Udupi temple. The sevaka then asked Guru Mahārāja, “Guru Mahārāja! Did you go to Udupi for darśana of Gopālajī?”

Guru Mahārāja did not say a word in response, but smiling, nodded his head in affirmation. Thus he indirectly confirmed that while staying near his sevakas in one svarūpa, he had certainly gone to have the darśana of Gopālajī in another svarūpa. This incident is just one example of his supra-mundane (atimārtya) character.