Nitya-lila-pravista astottara-sata Sri Srimad Bhaktivedanta Narayana Gosvami Maharaja appeared in 1921 during brahma-muhurta on Mauni-amavasya, in a village named Tivaripur in the Buxar district of Bihar. Both his parents were Vaisnavas initiated into the Sri sampradaya and from childhood, he had a keen interest in spiritual life. Due to acute detachment from the world, he renounced his home and family and in 1947 received diksa from nitya-lila-pravista astottara-sata Sri Srimad Bhakti Prajnana Kesava Gosvami Maharaja. He had the fortune of travelling with Gurudeva to all the pilgrimage places of India.

As he heard Gurudeva’s hari-katha in all the holy places, he took all his conceptions to heart. In 1952 he received sannyasa from Gurudeva. After some time, Gurudeva appointed him as the caretaker of Sri Kesavaji Gaudiya Matha, Mathura, for the purpose of propagating the message of Sri Caitanya Mahaprabhu throughout Hindi-speaking regions. Here, on the order and mercy of Gurudeva, he began publishing the Hindi periodical Sri Sri Bhagavat Patrika and translated and published in Hindi scriptures such as Jaiva-dharma and Sri Caitanya-siksamrta.

In the Bengali year 1366, Srila Guru Maharaja came to Pichalda, the village where I lived before joining the Gaudiya Matha. This village had had been purified by the lotus feet of Sri Caitanya Mahaprabhu. On the fifth day (pancami) of the month of Asadha, on Saturday, the day of the bathing-festival of Lord Jagannatha, Srila Guru Maharaja established the Pichalda pada-pitha, a footprint memorial commemorating Sri Caitanya Mahaprabhu’s visit there. In this matha, Sri Sri Guru-Nityananda-Gaura-Radha-Vinoda-biharijiu were installed.

Sri Gaura-govinda dasa Adhikari, who was a resident of the Pichalda Village, was my vartma-pradarsaka-guru, that person who first connected me with the Sarasvata Gaudiya line. By his endeavour only did I come to the matha. Thereafter, in 1959, I came to stay with pujyapada Narayana Maharaja in Mathura.

Attaining the Good Fortune of Serving him

When I came to Sri Kesavaji Gaudiya Matha, there were not many servants – only five or six brahmacaris were there. I used to cook and wash clothes for Maharajaji and answer the Bengali letters. He used to take me wherever he went to preach. In 1959, on Visvarupa-mahotsava, Srila Bhaktivedanta Svami Maharaja received sannyasa from Guru Maharaja, and on the same day, Guru Maharaja gave me saffron cloth.

Srila Bhaktivedanta Svami Maharaja often used to come to Mathura from Sri Radha-Damodara Temple in Vrndavana. Once, the governor of Orissa came to have darsana of the deities of Sri Sri Radha-Damodaraji. The pujaris there arranged that a musical performance welcome him. But there was some delay in the tuning of their instruments and when the governor arrived, they were still tuning them. Upon observing this, Srila Bhaktivedanta Svami Maharaja ordered Maharajaji to perform kirtana. He sang Jaya radha-madhava, jaya kunjabihari in a very sweet voice.

When the kirtana was completed, Srila Bhaktivedanta Svami Maharaja presented a copy of Srimad-Bhagavatam in English to the governor. The governor then gave some pranami to Thakuraji and left for Imlitala. The gosvamis were still seated in the Radha-Damodara courtyard trying to create charming music with harmonium, tabla and sitar. “The sannyasis performed kirtana for the governor and did not give us a chance,” they said. In response, Srila Bhaktivedanta Svami Maharaja said, “You were wasting time in just tuning your instruments. The governor was only here for a short visit. He was not going to wait till you got ready to play.”

Some Loving Memories of Maharajaji

Today, I am offering some transcendental memories of my supremely merciful senior godbrother, Srimad Bhaktivedanta Narayana Gosvami Maharaja, at his lotus feet.

He used to perform hari-katha and kirtana every day, going from house to house in Mathura. Every year in Kartika, he used to take a bus to Nandagrama, Varsana, Adi-badri, Kedaranatha and Kamyavana, where he spoke hari-katha. In those days, the devotees in Mathura used to bring prasadam on parikrama, which they cooked in their own homes.

Once, he went to Kosi on the appearance day of Srila Bhaktivedanta Vamana Maharaja, where, after a festival of kirtana and hari-katha, khichari prasadam was served.

I was also with them. Srila Bhaktivedanta Svami Maharaja said, “My godbrothers are upset with me. Ask for forgiveness from them on my behalf and have a feast at all Gaudiya Mathas upon my disappearance. Give instructions to my disciples.”

On the night of the disappearance of Srila Bhaktivedanta Svami Maharaja, we stayed in Sri Krsna-Balarama Temple. The next day after mangala-arati, we had darsana of all the seven temples of Vrndavana. On the way, Maharajaji performed kirtana for a long time, and at around twelve noon, Maharajaji placed him in samadhi.

The Giver of Great Bliss to Our Guru-varga

He who Increases the Bliss of his Servants

How selfless and detached a Vaisnava was pujyapada Sri Srimad Bhaktivedanta Narayana Gosvami Maharaja! Just by my thinking of this my eyes fill with tears. Now, [at the time of writing this,] eight to nine months have passed since he entered the eternal pastimes of Sri Sri Radha-Govinda, but memories of him are fresh in my mind.

His affection for me began not just two years or four, but more than fifty years ago, ever since my paramaradhya gurudeva, nitya-lila-pravista om visnupada astottara-sata Srila Bhakti Saranga Gosvami Maharaja established the Sri Indraprastha Gaudiya Matha in Delhi. Pujyapada Sri Srimad Bhaktivedanta Narayana Gosvami Maharaja had been invited to attend the festival and participated actively in those celebrations. Sripada Sesasayi Brahmacari and other Vaisnavas also came with him.

At that time I had been residing in the temple for five years. By the mercy of Sri Sri Guru and Gauranga I had great enthusiasm for service. Many other senior Vaisnavas from Sri Dhama Vrndavana also came to the festival. The responsibility for arranging prasada for all these devotees was on me. 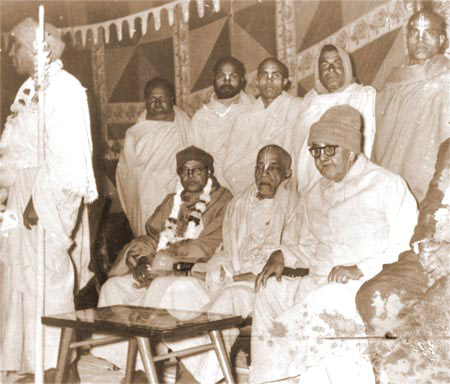 The Giver of Great Happiness to Our Guru-varga

On that occasion, upon hearing the speech of pujyapada Narayana Maharaja in the religious assembly, my gurupada-padma Sri Srimad Bhakti Saranga Gosvami Maharaja, Srila Bhaktivedanta Svami Maharaja and Srimad Bhakti Saurabha Bhaktisar Maharaja were extremely pleased. Although pujyapada Narayana Maharaja’s native language was Hindi, he also spoke in Bengali and English. It was on that day that I developed a natural mood of devotion to him. Later, whenever I met with him, he instructed me on the performance of bhajana.

Expert at Both Preaching and Practising

Just as pujyapada Narayana Maharaja was a very qualified preacher, he was also a bhajananandi. Srila Sanatana Gosvami said to namacarya Srila Haridasa Thakura in Sri Caitanya-caritamrta (Antya-lila 4.103), “acara, pracara – namera karaha dui karya, tumi – sarva-guru, tumi – jagatera arya – You are practising nama-bhajana and also preaching about nama. Thus, as the greatest devotee, you are the guru of all.”

Adorned with the Pure Conduct of a Vaisnava

In the same way that pujyapada nitya-lila-pravista om visnupada Sri Srimad Bhakti Prajnana Kesava Gosvami, the gurudeva of Srila Narayana Maharaja, had a loving relationship with my gurudeva, similarly, pujyapada Narayana Maharaja showed much affection for me. A temple was constructed in Nandagrama by the name ‘Sri GosvamiBhajana-kutira’ (or Nanda-asrama), in accordance with the merciful instruction of Srimad Bhaktisuhrda Akincana Maharaja, who was the acarya of the Sri Gaudiya-sanga at the time.

When I invited pujyapada Narayana Gosvami Maharaja to the festival he accepted immediately. On the 6th of April, 1993, the day of Sri Sri Baladeva Prabhu’s rasa-purnima, pujyapada Narayana Maharaja personally paid to hire a bus and brought mathavasis, devotees and followers to Nandagrama. In such a wonderful way he accomplished this inaguration festival. As he was about to leave, I offered him some pranami (donation), but he flatly refused to accept it.

Even before the establishment of Sri Gosvami Bhajana-kutira in Nandagrama, pujyapadaNarayana Maharaja showed that he was very satisfied with me, as I was already staying in Nandagrama. Once he stayed in one of the rooms of a person who owned the land where Sri Giridhari Gaudiya Matha, Govardhana, is now established, and performed bhajana there. He appreciated that I had some taste to stay in Vraja-Nandagrama and he would enthuse me to continue. On his instruction, I have spent many years serving Sri Sri Giridharijiu in Nanda-asrama at Nandagrama.

When pujyapada Narayana Maharajaji would bring his Vraja-mandala parikrama party to Nandagrama, he would first take darsana of Srila Sanatana Gosvami’s bhajana-kutira on the banks of Pavana-sarovara. Then, without fail, he would come to Nandasrama with his party and perform kirtana of the katha of Sri Sri Guru-Gauranga. In later times, due to his health, he could not go on parikrama, and on his order, the devotees in his shelter would come to Nanda-asrama when on Vraja-mandala parikrama and perform katha-kirtana.

The Final Blessings of Pujyapada Maharaji

Last year, after hearing of pujyapada Narayana Maharaja’s ill health, I went to Sri Giridhari Gaudiya Matha. His servants told me that on the doctor’s order, pujyapada Maharaja was not allowed to speak. But still, they kindly informed him that Srauti Maharaja had come from Nandagrama. I was observing this through the window. As soon as he heard my name, pujyapada Maharajaji looked directly at me, his eyes wide open. It was as if he was giving me his final blessings. At the time of his disappearence I was ill and unable to move my body, so I was unable to attend the festivals of seperation held in his honour.

In India and abroad, Srila Maharajaji preached the message of Sriman Mahaprabhu with great enthusiasm, even in his advanced age. In just a few years he manifested Sri Rupa-Sanatana Gaudiya Matha in Sri Vrndavana, Sri Giridhari Gaudiya Matha in Govardhana, Sri Sri Kesavji Gaudiya Matha in Navadvipa, and many other preaching centres and temples in India and abroad. He also published many books, translating into Hindi and English the scriptures of the Sri Gosvamis. In this way, he manifested the service of Sriman Mahaprabhu and Sri Sri Radha-Govinda in this world, thus bestowing great spiritual benefit upon all souls.

A Prayer at the Lotus Feet of Pujyapada Maharaja

“Aprakrta vastu nahe prakrta gocara – transcendental objects cannot be percieved by material senses.” ‘Vaisnava cinite nare devera sakati’ – even the demigods cannot recognize the Vaisnavas.” “Mui kemane ciniba adhama alpa mati – how can I, who am fallen, understand the Vaisnavas with my small intelligence and thus explain their real glories?”

May he continue to attract me from the eternal abode. With this prayer, I am concluding my puspanjali.

_______________
Srimad Bhakti Cakora Srauti Maharaja is a disciple of nitya-lila-pravista Sri Srimad Bhakti Saranga Gosvami Maharaja. For many years he has been performing bhajana in Sri Gosvami’s bhajana-kutira in Nandagrama, near Pavana-sarovara.