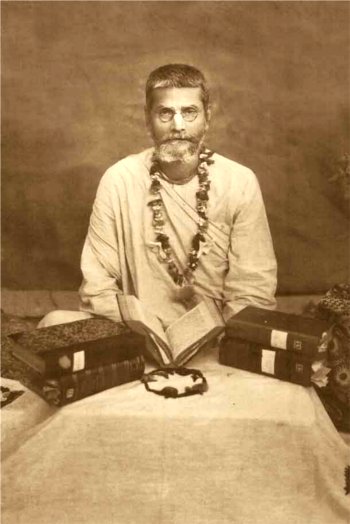 The Nectarean Milk of Śrī Bhagavad-gītā

The most dignified seers of ancient India (ārya-ṛṣis) have glorified  Śrīmad Bhagavad-gītā  as the crest jewel of all the philosophical treatises of Vedic India known as the Upaniṣads. In contrast to other Upaniṣads,  Śrī Gītā  specifically establishes that Bhagavān is inherently imbued with unlimited transcendental pastimes. Also, in the  Gītā-māhātmya, which beautifully extols the  Gītā, the  Gītā  has been described as the essence of all Upaniṣads:

Gīta, which is a part of  Mahābhārata, is spoken by Śrī Vāsudeva, or Kṛṣṇa, the son of Queen Devakī. However, in the above verse it is said ‘dogdhā gopāla-nandana – He who milks the cow of the Upaniṣads, is Vrajendra-nandana Śrī Kṛṣṇa, the son of Śrī Nanda Mahārāja, the king of the cowherds of Vraja.’

It is thus clearly understood that the sole speaker of  Śrī Gīta is in fact Vrajendra-nandana Śrī Kṛṣṇa, who is constantly playing in His eternal abode known as Śrī Vṛndāvana. Although He has spoken the  Gīta  in His form of Vāsudeva, His own statements have revealed His real form as the embodiment of the highest expressions of transcendental humour (rasamaya-svarūpa).

By discussing the beginning of  Śrī Gīta, its conclusion, and all of its parts, it can be understood that Śrī Kṛṣṇa alone is the Supreme Absolute Truth and the topmost worshipful reality. He is worshipped only by  bhakti, and  prema-bhakti  is the pinnacle of that worship.

Full Self-surrender is of Two Kinds

Now we will discuss the nature and development of complete self-surrender, or  ātmanivedana, as explained in  Śrī Gītā. From an external point of view, the instructions of  Gītā  are universal. Therein, in a condensed form, all topics related to  bhakti  have been expressed, from offering the results of one’s activities (karmārpaṇa) up to surrender(śaraṇāgati) all the way to full surrender of one’s very self (ātmanivedana).

To illustrate the first type of  ātmanivedana, which, as just described, lacks permanent  bhāva, Śrīla Jīva Gosvāmīpāda has quoted the following verse from  Śrīmad-Bhāgavatam (11. 29.34):

A mortal being who gives up all fruitive activities and offers himself entirely unto Me, eagerly desiring to receive a special favour from Me, achieves immortality in the form of liberation from birth and death and becomes extremely dear to Me.

To illustrate the second type, which is endowed with a specific bhāva, Śrīla Jīva Gosvāmīpāda has referred to a verse spoken by Śrī Rukmiṇī devī:

Therefore, my dear Lord, I have chosen You as my husband and I surrender myself to You. Please come swiftly, O Almighty One, and make me Your wife. My dear lotus-eyed Lord, let Śiśupāla who is like a jackal stealing the property of a lion, never touch the hero’s portion.

Full self-surrender at the lotus feet of Bhagavān that is endowed with any one of these four specific relationships is called  bhāva-yukta ātmanivedana, and the full self-surrender that is performed at the lotus feet of Bhagavān before the awakening of any of these four relationships is called  bhāva-hīna ātmanivedana.*

Bhāva-hīna ātmanivedana  is visible in the life of Śrī Bali Mahārāja, and Śrīla Jīva Gosvāmīpāda has shown this elsewhere in his  Sandarbha. Śrī Bali Mahārāja’s service is devoid of any permanent transcendental humour, or fixed relationship. Furthermore, it cannot be considered a relationship of service in spontaneous devotion.

The most confidential and topmost instruction of  Gītā (18.66) is:

Completely abandoning all bodily and mental  dharma, such as  varṇa  and  āśrama, fully surrender to Me alone. I shall liberate you from all reactions to your sins; so do not grieve.

When a person renounces all types of  karma and completely surrenders to Me, by My will he becomes more opulent than a  yogī  or a  jñānī. Within no time, he attains liberation (mukti) and becomes qualified to receive opulences like My own.

This verse has been quoted by Śrīla Jīva Gosvāmī as an example of the first type of  ātmanivedana, which is devoid of any permanent  bhāva  (bhāva-hīna ātmanivedana). And the  śloka  quoted just before this verse, beginning “sarva-dharmān parityajya”, which is the topmost instruction of  Gītā, conveys the same meaning. Moreover, the words “ahaṁ tvāṁ sarva-pāpebhyo mokṣayiṣyāmi mā śucaḥ – I shall liberate you from all reactions to your sins; so do not grieve” is only the special explanation of the words“vicikīrṣito me  – desirous of receiving any special favour from Me” found in the  Bhāgavatam  verse just quoted. Hence, the Gita verse beginning “sarva-dharmān parityajya”, is clearly instructing the common masses to perform full self-surrender at the lotus feet of Bhagavān that is devoid of any relationship with Him.

Now we must determine whether or not  bhāva-yukta ātmanivedana, full self-surrender at the lotus feet of Bhagavān that is endowed with one of the four previously mentioned eternal relationships, is hinted at or indicated in  Gītā.

An intelligent lover who is adored by many will speak to a gathering in a general way about affectionately serving him. But when his beloved is also present, in the midst of general topics, he will hint to her in a hidden way about how to please him in a special way. Ordinary people, in this scenario, would be unable to understand such hints, but those who are extraordinarily dear to him would certainly be able to comprehend them.

Similarly, the crest jewel of intelligent lovers, Gopāla-nandana Śrī Kṛṣṇa, even in the midst of instructing ordinary people, has given hints about extraordinary service, or extraordinary  ātmanivedana  endowed with a permanent, specific transcendental relationship, for those who have such extraordinary desires to serve.

What to speak of fruitive workers (karmīs), even those whose  bhakti  is mixed with  jñāna (jṅāna-miśra-bhaktas) cannot understand such hints. On the other hand,  bhaktas who desire an extremely intimate relationship with Śrī Kṛṣṇa in a mood of spontaneous devotion (rāgānuga-bhāva), not only comprehend His hints about  bhāva-yukta ātmanivedana, but also realize His clear instructions on the subject.

In the Tenth Canto of  Śrīmad-Bhāgavatam, Śrī Rukmiṇī-devī prays to Śrī Kṛṣṇa in her letter:  “tan me bhavān khalu vṛtaḥ patir aṅga jāyām  – I accept You as my husband and fully dedicate myself (ātmanivedana) at Your lotus feet.” Here, full self-surrender is performed by embracing the humour of divine amour (kānta-bhāva) in the core of her heart.

Self-surrender endowed with a specific relationship is clearly expressed in  Bhagavad-gītā 10.9–10 and 11.44. There, Śrī Bhagavān has said:

The meaning of these two verses is as follows: “Those whose minds and lives are devoted to Me and who always meditate on Me, always speak about Me and derive satisfaction in Me alone. Their minds feel relaxation and comfort only by thinking about Me, and they are constantly desirous of perpetual union with Me. I bestow upon such devotees transcendental intelligence and knowledge, by which they can attain Me.”

Most  Gītā  commentators, including Śrīla Śrīdhara Svāmīpāda, have provided purports to these two  ślokas that pertain to common people only. However, Śrī Kṛṣṇa, the crest jewel of all genius lovers, cannot stop Himself from uttering the deepest instructions, even in the midst of speaking general instructions, and that most profound instruction is that we should render intimate, loving service (viśrambha-seva) to Him.

The general meaning of the component “ramanti ca” provided by these commentators is found within their purports to the words “tuṣyanti ca” in  Gītā  10.9. As a result, there remains no specific significance to the phrase “ramanti ca.” However, unless there is a specific meaning to these words, there would have been no reason for Kṛṣṇa to use them.

Śrīla Baladeva Vidyābhūṣaṇa Prabhu and Śrīla Viśvanātha Cakravartī Ṭhākura have therefore discarded the general meaning of “ramanti ca” and have only accepted its specific meaning, ascertained by examining its verbal root, which carries innate meaning. The verbal root  ram, means ‘sport’ or ‘play’ (kṛīdā). Use of the verbal root  ram  not only indicates self-surrender endowed with a specific relationship (bhāva-yukta ātmanivedana), but in fact the topmost among all  bhāvas –  madhura-bhāva-yukta ātmanivedana.

Śrīla Baladeva Vidyābhūṣaṇa Prabhu has said in his commentary, “ramanti ca yuvati-smita-kaṭakṣādiṣu eva yuvānaḥ – these words refer solely to self-surrender characterized by accepting Bhagavān as the object of affection in the transcendental humour of amorous love. That humour of divine amour (kānta-bhāva) possesses the attributes of smiles, sidelong glances and so on.”

Śrīla Jīva Gosvāmīpāda quotes a part of Śrī Rukmiṇī-devī’s letter as an example of  bhāva-yukta ātmanivedanam. Her letter expresses the same profound meaning as what is hidden within the words “ramanti ca” in the  Gītā śloka.

Śrīla Viśvanātha Cakravartī Ṭhākura gives a similar meaning for “ramanti ca”. He explains that Bhagavān expresses  rāgānugā bhakti  in these words. The only satisfaction and delight of the single-pointed devotees is the performance of  bhakti. This is the secret. Even in the stage of  sādhana, they attain satisfaction by their uninhibited performance of  bhajana. While meditating on their future stage of perfection, they experience great delight. In other words, they enjoy with their Lord and master, Śrī Kṛṣṇa, within their minds.

I Bestow Transcendental Knowledge By Which They Attain Me

I therefore prostrate my body at Your lotus feet in obeisance. O adorable Supreme Lord, I entreat You to be gracious to me. O Lord, just as a father forgives his son, a friend tolerates a friend, or a lover excuses his beloved, You should forgive my offences.

Here, the subject of full self-surrender endowed with one of the four humours of servitude, friendship, parenthood or transcendental amour, has been clearly expressed. In  Gītā 10.10 quoted formerly, Kṛṣṇa says, “dadāmi buddhi-yogaṁ taṁ yena mām upayānti te – to those who worship Me with love and yearn for My eternal association, I bestow that transcendental knowledge by which they attain Me.” The prominent  mahājanas, Śrīla Baladeva Vidyābhūṣaṇa Prabhu and Śrīla Viśvanātha Cakravartīpāda, express that “buddhi-yoga”, or communion through transcendental knowledge, is suggestive only of  sādhana  endowed with relationship (bhāva-yukta sādhana).

“I am the enjoyer of the  rasa  derived from the happiness of My own  bhakti, and I bestow upon My devotees that transcendental knowledge by which they attain Me. I inspire their intelligence so that they can understand Me, with all My unlimited qualities and majesties. Thus, by their worship, they can attain Me.”

Śrīla Viśvanātha Cakravartī Ṭhākura has said in his purport to this verse:

“ ‘I bestow upon them transcendental knowledge, or  buddhi-yoga. I inspire them according to their hearts’ tendencies. That transcendental knowledge cannot be achieved by individual efforts, nor can it be obtained from anyone else. It is bestowed by Me alone, and only such  sādhakas who are aware of their specific relationship with Me can receive it.’ This is the meaning of Kṛṣṇa’s words.”

Translated from  Śrī Gauḍīya Patrikā, Year 2, Issue 8
by the  Rays of The Harmonist  team

Rays of The Harmonist On-line, Year-4, Special On-line Edition, "The Highest Process of Love is Hidden within Bhagavad-gita", by Śrīla Bhakti Prajñāna Keśava Gosvāmī Mahārāja, is licensed under a Creative Commons Attribution-Share Alike 3.0 Unported License to ensure that it is always freely available. You may redistribute this article if you include this license and attribute it to Rays of The Harmonist. Please ask for permission before using the Rays of The Harmonist banner-logo.