Casting off the Mundane is External

An excerpt from Part 3 of “The Most Compassionate Avatara”
Appearing in Rays of The Harmonist, Kartika, 2008 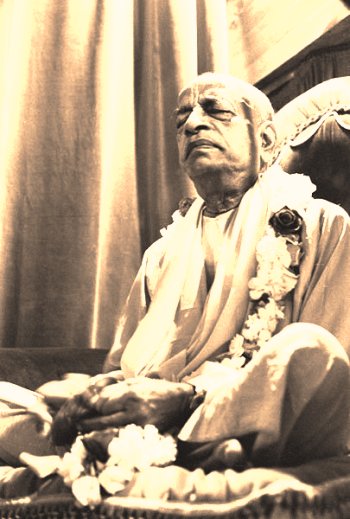 This three part series by Sri Srimad Bhaktivedanta Svami Maharaja is based on the following verse:

May the son of Srimati Saci-devi, Sri Gaurahari, forever manifest spontaneously within the innermost core of your heart. Adorned with the radiant splendor of molten gold, He has descended (avatirnah) in the Age of Kali by His causeless mercy to bestow upon the world that which has not been given for a long time – the beauty of His own brilliantly radiant ujjvala-prema-rasa bhakti, service in the highest mellow of amorous love.

In Part 2 of this article, Sri Ramananda Raya explained to Sri Caitanya Mahaprabhu the value of varnasrama-dharma as a means to satisfy the supreme Lord Visnu. When Mahaprabhu rejected this as external, Ramananda Raya told Him that to offer Sri Krsna the results of one’s action is the essence of all perfection. (Sri Caitanya-caritamrta 8.58–9)

Sri Ramananda Raya then mentioned the next topic: the renunciation of fruitive action, or karma-sannyasa. In Kali-yuga, sannyasa has come to mean the mere acceptance of sannyasa garb, but the actual pre-requisite for sannyasa is a purified heart. When one becomes detached from the fruits of action by performing selfless work (niskama-karma), one’s renunciation is perfect. On the other hand, if anyone accepts sannyasa while his heart is still impure, then the thirst for enjoyment will fully remain. His sannyasa is not a means to achieve love for Krsna (krsna-prema).

First of all, in Kali-yuga, it is not possible for everyone to accept karma-sannyasa. Moreover, even for those who can accept it, such sannyasa, which is a way of living above karma, is simply a state of harmony with the three modes of material nature. It cannot help one attain love of God (bhagavat-prema).

The prime reason that Sri Gaurasundara advented in this world was to deliver to its inhabitants the message of Vaikuntha and to bestow upon them immaculate, transcendental and spontaneous love of God, bhagavata-prema. This prema is devoid of any scent of awe and reverence and issues from the ocean of bhava (transcendental emotions) in the incomparable realm of Goloka Vrndavana – the topmost place in Vaikuntha. What, therefore, can renunciants (sannyasis) understand about the Unparalleled Entity, regardless of whether their hearts are pure or impure? Understanding that those renunciants lack eligibility to receive krsna-tattva-rasa*, Sri Gaurasundara also rejected the acceptance of such sannyasa, regarding it as external.

Sri Ramananda Raya then spoke about jnana-misra-bhakti, or devotion that is mixed with a desire for liberation. On this path, after a person finally attains the stage of self-realization called brahma-bhuta and subsequently becomes full of bliss (brahma-bhuta-prasannatma), he may then perceive the path of devotion to the Lord. However, until he actually sees it, the prospect of merging with the impersonal aspect of the Supreme (nirvisesa-sayujya-mukti) blinds him. For a pure devotee of Bhagavan, this sayujya-mukti is no better than hell. He refuses any kind of salvation other than loving service to Bhagavan even though the Lord is eager to award him various other kinds of mukti, like attainment of a form similar to His own (sarupya-mukti) and residence on the same planet as Him (salokya-mukti).

Thus, in jnana-misra-bhakti there is no hope of ever attaining pure love. A person with the egotism that he is already liberated can have no realization of the variegated features of Absolute Reality – He who casts away all delusion. Therefore such egotism reflects the tendency to be antagonistic to Bhagavan.

Sri Caitanya Mahaprabhu imparted to the world the eternal object of the eternally pure living entity’s worship (the nitya sevya-vastu of the nitya suddha-jiva). The worship of the nitya sevya-vastu is not a concocted religion that has arisen from someone’s imagination; it is the soul’s intrinsic function. Sri Caitanya Mahaprabhu descended to personally give this. He thus embodies the statement “karunaya-avatirnah-kalau – the most compassionate incarnation, who has descended in this age of Kali”.

Translated from Sri Gaudiya Patrika, Year 7, Issue 3, 1956
by the Rays of The Harmonist team