Sri Vyasadeva - Part One of Three

Śrī Vyāsadeva - Part One of Three 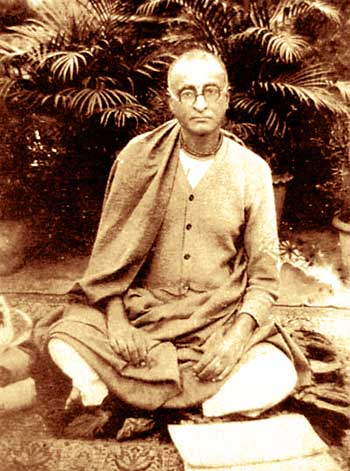 Dear object of my affection,

The word jaya (victory) is uttered to express the conviction of excellence. We are enabled to realize the nature of the subject-matter of the worship of Śrī Vyāsadeva when we apply ourselves to considering the excellence of Śrī Vyāsadeva.

Śrīla Vyāsadeva enjoins on us to meditate upon the Absolute Truth, who always dispels all delusion by His own potent effulgence. When we follow in the footsteps of Śrī Vyāsadeva, we attain sight of the Divine Entity. The word dhāma means ‘light’ or ‘receptacle’. By the help of light, darkness is dissipated; that is, if we actualize the proper receptacle, we shall be endowed with the eligibility to perform meditation. Our faculty of recollection shall be resuscitated – that recollection that has passed out of our memory.

Non-forgetfulness of the twin lotus feet of Śrī Kṛṣṇa reduces non-good, and augments positive well-being. It does so by promoting purification of the entity, devotion to the Supreme Soul, and Knowledge endowed with an understanding of reality and a non-hankering for the mundane.

It is only if we are in a position to constantly remember that Entity, the Supreme Soul, within the heart that well-being ensues. Hearing is rendered possible by the agency of chanting (kīrtana); and if hearing is maintained in the best manner, real well-being makes its appearance. In the absence of hearing and chanting (śravaṇa and kīrtana) the substantive manifestation is not possible.

Take for instance the following contentions of the atheists: They think that the Divine Entity has no body, no beauty; that He is not transcendental; that it is necessary to depend on knowledge derived through the senses to reach His presence, like Rāvaṇa; and so on. But śruti (heard transcendence) does not say so.

The Divine Entity is the lotus feet of śrī guru in the order of the spiritual successors of Śrī Vyāsa – he whose chanting actually awakens our recollection of the divinity, just by listening to it. All of us are His servants. The desire to chant has been aroused by the practice of listening. By the agency of kīrtana, or singing, the conditioned aptitude is dispelled. If the Word, or that country – that unlimited realm (Vaikuṇṭha) where word is song, the region that transcends the sphere of the measuring aptitude – reaches our ears, simply by listening to that song our eternal well-being manifests itself by the elimination of all evil.

‘Vaikuṇṭha’, or aprākṛta-śabda (transcendent word), may be rendered as ‘transcendental sound’. The word ‘transcend’ signifies ‘ascent’, ‘ascent’ from the conditioned aptitude. To remain here is equivalent to be confined to the mundane experience, to practise one’s masculine egotism or one’s vanity of being the master. But there can be no real well-being if one remains entangled in such dominating egotism, for the reason that it is only those persons who are infatuated by the sense of their own superiority that are apt to be entrapped in the fetters of such dominating egotism.

The person whose soul is infatuated by dominating egotism regards himself as his own master.

This is the testimony of the Gītā and all śruti.

The individual soul perching on the same tree (as the Divinity) undergoes miseries due to his non-divinity and infatuation. When, in the act of serving, he perceives his companion to be the Divinity, he is delivered from sorrow in the realization of his companion’s glory.

When the perceiving entity has sight of the Master – the Supreme Lord, who is the person who is the cause of Brahman, who has a golden hue – he is completely cleansed of his virtues and vices, and freed from the obstruction of mundanity. Obtaining real enlightenment, he attains to the condition of supreme equipoise.

In the ślokas just quoted, there is mention of the supreme equipoise, which is altogether different from the position of equality that is postulated by our sense-ridden judgment. The equality that relates itself to limited entities is not absolute. The equipoise relative to the Great One is a different entity.

There is mention of one’s meeting with the person with the golden hue, and of sin and righteousness. But it is only when we are relieved from all these conditions that we are in a position to know that we are not non-spiritual entities, nor is it the function of our real nature to remain engrossed in the non-spiritual entity. So long as we remain entangled in our perverted self, by going off the track of our soul, it is not possible for us to meditate on the true Object of our meditation. The practice of meditation on limited entities has reduced us to the condition of the frog in the well.

Adapted from The Gaudiya Volume 5, Number 2 & 3
by the Rays of The Harmonist team